How to Pay for the War: Politics & Central Banks

All other countries
by Andrew Hunt, International Economist
29 March, 2022

The economic costs of the current conflict in Ukraine may pale into insignificance in comparison to the human suffering, but they are not irrelevant to markets. The bottom line is of course that wars make society poorer, as does conflict in general, natural disasters, or catastrophic errors. If a factory is destroyed by conflict or closed by a Pandemic, it does not matter how much money you print and give to its owners, it cannot produce more (or in some cases anything). We have little doubt that since 2019 the World has become poorer in terms of what it can produce, if not absolutely, then at least relative to what it might have been able to produce had recent events not occurred. Productive resources have been closed, destroyed, or made redundant, and the “Great Resignation” has occurred. There is no escaping this fact.

A useful and we suspect by no means atypical example of this is Italy. Officially, industrial output in Italy is around 5% lower than it was in 2016-18. However, reported capacity utilization is slightly higher today than it was three years ago, thereby implying that while production might be 5% lower, theoretical capacity is actually 6-7% lower. Italy has been made poorer.

We do not yet know by how much energy and food production will decline as a result of the awful events in Ukraine, but we do know that the World will not be able to consume as much energy or as much food as it did in the past. We will therefore have to produce less, to drive less, and some (unfortunately and very regressively) will have to eat less – the poorest will unfortunately tend to be the most affected by this situation, but the truth is that we cannot consume what is not there however much some in the media may bleat. We can also assume that those that do have supplies of food and energy will gain from rising prices, while those that produce other things but which need to consume food and fuel will likely suffer a terms of trade deterioration and a consequent loss of their real income.

Another example. The cost of imports within the Euro Zone has risen by 30-40%, a rate that is probably double that of the Region’s export prices. This has likely been the worst terms of trade and hence income shock to the Euro Area in its history, and easily the worst shock for many of the constituent countries since 1973 if not the Second World War. Quite simply, fuel has been revalued relative to cars, and a country like Germany that produces cars rather than fuel is therefore poorer than it otherwise would have been. There is no escaping this fact and it will most likely result in a recession.

Again, we don’t yet know by how much Germany has been made poorer and German Reunification has made it harder to conduct meaningful historical comparisons, but France’s data is revealing. During 1973, French subsistence costs rose by at a time when subsistence goods including energy accounted for 8-9% of household consumption by volume, or 7% by value. Today, the proportion of consumption expenditure devoted to subsistence is slightly higher in value terms and only 100 bp lower in volume terms, but the price shock has been larger.

Therefore, it is possible that the implied “relative hit” to real incomes in parts of Europe may therefore be larger than even during 1973. Consequently, we suspect that economic growth in the EZ – and elsewhere – is already a fragile commodity and that significant recessions are already inbound. Approaching recessions are rarely good news for equity markets over the medium term.

In an environment such as this, the key issue for central banks is to get people to accept the fact that they have been made poorer and to understand that this is only (hopefully) a one-time event. If people do not believe that they have simply been made poorer by events outside of their control, then the risk is that they may mistake it as some form of personal / specific “price anomaly” that they should seek to offset by obtaining higher wages or incomes (unfortunately, this seems to be the media’s default position). If they gain higher wages, they may be nominally “richer” in money terms, but they are of course still poorer in real terms and the difference between real and nominal is, of course, made up by (rising) prices.

Consequently, if everyone simply seeks compensatory nominal wage hikes in response to the recent real economic shocks, then they will not just be relatively poorer, but they will also face a rise in the general price level as well. This would create yet more – longer term – problems for the system. Endemic inflation brings with it its own set of economic and social problems.

Therefore, the central banks need people not to bid wages higher and instead to practice wage restraint. However, there is a Prisoners’ Dilemma issue here; if you as an individual do practice wage restraint but no one else does, then you will suffer not just the adverse effects of the original relative price shock, but you will also miss out on possible compensation for the general price shock and end up doubly poorer. Quite rationally in the circumstances, people will all tend to ask for higher wage awards, even though this is the “wrong” or sub-optimal outcome for society.

The only way that the “best outcome” can occur in the Prisoners’ Dilemma is if agents collude, and in a macro sense this can only be done by the government and central bank convincing people that inflation isn’t really a problem and that this is a one off / transitory event that they will contain (sound familiar?). This is why central banks have become so fixated on people’s view on whether inflation is transitory or persistent, and on how persuasive and entrenched expectations of inflation are becoming.

In order for people to believe the central banks’ view, they must above all else be seen as being credible institutions. Unfortunately, the Banks’ forecasting errors of 2020/21, as well as their pursuit of other targets such as income equality, regional policy, ESG, and even an at times overriding desire to hold sub-optimal currency blocs together at all costs will all count against the Banks’ inflation-fighting credibility. As we and others suggested at the time, Mr Powell’s Jackson Hole speech in 2020 represented something of a nadir for central banking.

Only two years since Powell’s equity-market-boosting speech, the central banks now know that everything ultimately hinges on their ability to control / contain inflation expectations. For many of the more academically-leaning institutions, this simply means keeping an eye on inflation break evens and even forecasters’ models, a situation that implies that central banks such as the Fed will simply do as little or as much as is necessary in order to prevent the long end of the yield curve selling off.

In fact, we suspect that the Central Banks will aim to achieve a flat curve from 1 year to 5 – 10 years, and for them the only question will likely be at what level this flattening occurs? In an effort to anchor the long end, and so minimize the number of rate hikes that they in practice have to do, they will most likely talk very tough (talk loudly but carry a small stick.....) as they iterate towards whatever level of short-term rates is necessary; they will in effect be data dependent in pursuit of a flat curve.

If our assumptions over household income trends and our inventory work is correct, then the Fed could find that it does not need to do as much as it expects to control the long end. The ECB could, quite conceivably, have even less to do given Europe’s inherent fragilities.

Of course, it is not only the Central Banks that play a role in forming people’s expectations; their political masters are of course important and here there is a more obvious conundrum for policymakers. No government will want to tell its population that they are in fact poorer or going to be poorer. Even telling them that they have never had it so good is taboo; governments have to promise growth and progress.

During a time of total war, it was relatively easy for Mr Keynes to stand up and advocate rationing and compulsory saving because people were only too well aware that the world had changed in 1940 (although even in 1939 this was still a subject for debate) but we can presume that today this represents a harder “sell” for Western populist-leaning politicians when talking about what to many of their electorate may still seem like a far-away war. In this regard, we do have some applause for the UK’s Mr Sunak this week, he does seem to have avoided falling into the trap.

However, if other governments do not follow Sunak’s lead, or he is overruled by his boss, and governments do attempt to convince fool people into believing that they are not poorer - and even attempt to use fiscal spending, subsidies, and tax cuts to try to convince the population that they are better off than they are - then all we will get is inflation, probably of the persistent variety. This was very much the lesson pf the late 1970s.

For those that believe that we are today facing a structural turn in inflation, we would say that in order for this to happen we will need to see Biden, Johnson, Scholz, Macron, and even Xi embark on a concerted fiscal expansion. Macron has clearly wobbled in this direction but so far, we suspect that the only official that seems to have moved resolutely in this direction appears to be President Xi, and the impact on inflation appears to have been immediate. China may indeed be facing a structural inflation / stagflation problem as it moves to the aggressive use of fiscal policy. 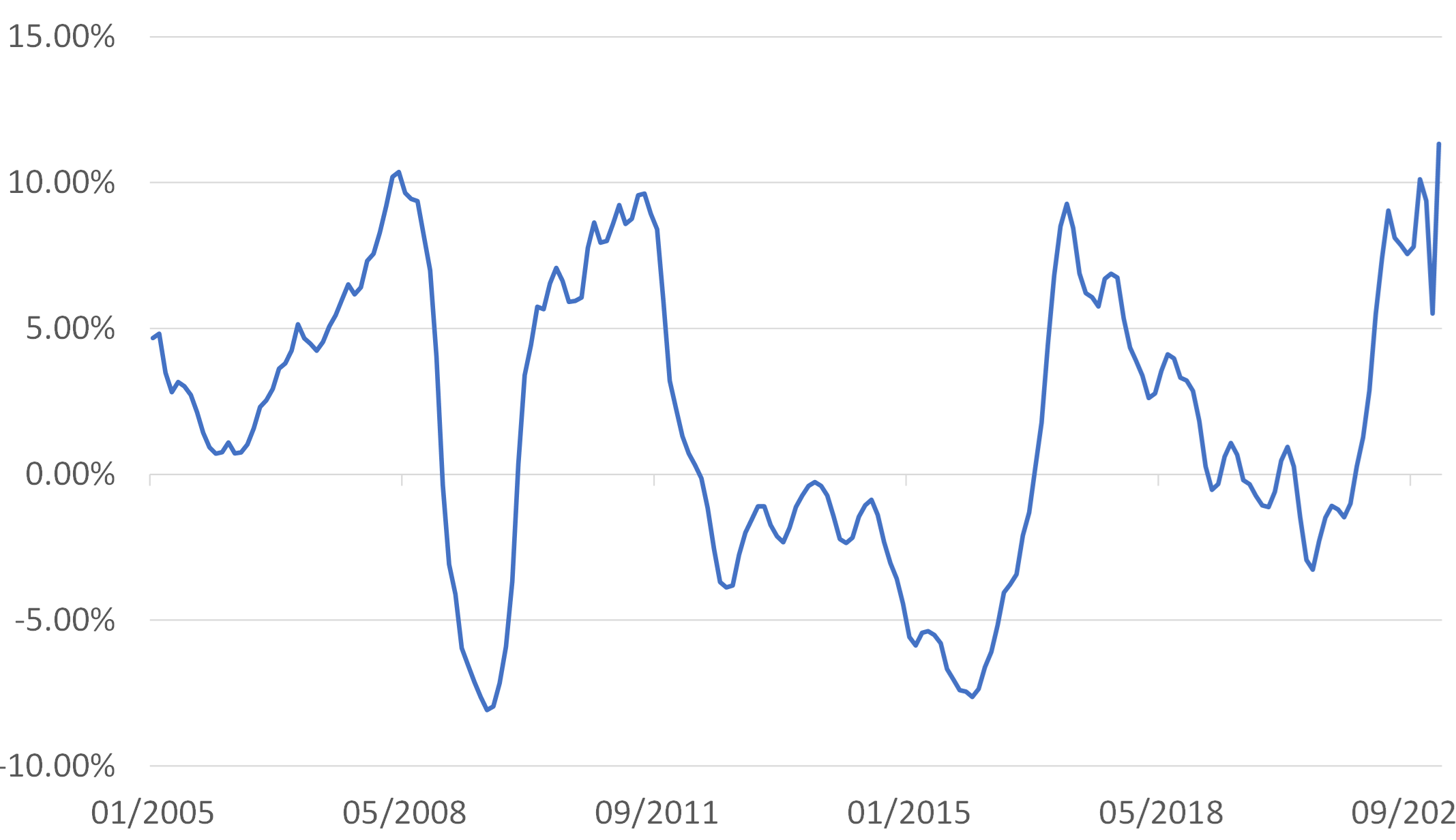 Perhaps as a result of their Pandemic-era largesse and excesses, so far most Western governments appear to be being more hesitant when it comes to their fiscal responses and, if they can continue with this parsimonious response (note that this does not preclude help for the less well off at the expense of the wealthier), then they need not trigger a systemic rise in inflation.

However, if they do err towards an illusion-fostering-fiscal easing, then they will in fact be repeating their forebears’ errors from the late 1970s. Inflation rates would then rise on a trend basis, and bond markets will crash.