Why December 2021 May Have Made History - The Great Divergence Begins

All other countries
by Andrew Hunt, International Economist
03 January, 2022

While last month witnessed only its usual quota of central bank policy meetings, we suspect that it will ultimately go down in history as representing the beginning of what we suspect may become the Great Divergence within central banking. Having spent a generation moving in similar directions in an overt effort to suppress currency volatility, it now appears that the central banks within the major Economic Blocs are beginning to move in different directions. We believe that this development has the potential to dramatically alter the investment universe.

One of the theoretical constructs from the early 1980s “Rational Expectations School” of economics that has been carried over to modern-day central banking practices is the notion that monetary policy should be predictable, at least from the perspective of the real economy. Over recent years, and in particular, since the GFC, this notion of stable monetary policy has however morphed into the notion that central banks should themselves be predictable and offer what we now refer to as extensive “forward guidance”.

Rather ironically, this policy prescription is in fact the very opposite of that which was espoused by the Head of the Bundesbank during Germany’s monetary Heyday in the 1980s; President Pohl’s view was that while monetary conditions is the real economy should always be predictable, the Bundesbank itself should not be predictable. By being unpredictable, Herr Pohl argued that there were less likely to be destabilizing “excesses” (i.e. booms and busts) in financial markets and hence underlying monetary conditions in the real economy were more likely to be stable.

Indeed, while the implied lack of volatility in Herr Pohl’s world might well represent good news for the efficiency of the real economy, it represents bad news for financial market participants who need some degree of economic instability in order to achieve excess returns. In fact, in a world of low nominal yields and suppressed economic volatility, those portfolio managers that seek to generate excess or superior returns are forced to resort to the use of leverage and even day trading.

Of course, the heavy use of leverage then generates the potential for the types of excesses, booms, and busts that Herr Pohl so feared.... The needs of the real and financial sectors differ rather radically on this topic.

Another key and related “evolution” in central bank thinking since the early-1980s has come within the over-emphasis of price variables in deciphering current “financial conditions”. We have gone from a world of (quantity of) money targeting in the 1980s, to a world in which central banks apparently target “Financial Conditions Indices” that are in practice dominated by short-term interest rates, credit spreads, yield curves and even equity prices. It is perhaps ironic that, in a world that has been typified by Quantitative Easing Policies, the central banks themselves pay little or no interest in quantity variables.

More importantly, by including credit spreads and equity prices in their matrix of target variables, the central banks are implicitly setting themselves up to create moral hazard scenarios, since the markets know that the Banks will have a low tolerance for equity market weakness. It is no coincidence that the relative valuation of risk assets started to rise once central banks started to target them....

Unfortunately, when a policy concept is as logically flawed as modern-day central banking is today, it frequently takes more and more outlandish actions and statements in order to sustain or justify it, most likely because of the moral hazard effect whereby people take more and more risk to “exploit” the Central Banks’ policies. The ECB is by no means unique in having achieved a ridiculously outsized balance sheet in relation to the size of the economy over which it presides, but this has in all likelihood been a direct consequence of the World the authorities have created.

The forward guidance mantra has also resulted in some painful torturing of the English language and improbable statements over recent weeks. The BoE’s recent U-turn on a U-turn on a U-turn; the RBA’s promise “never” to raise rates; and the author’s favourite one of Mr Powell seeking to define transitory and persistent as concepts that were unrelated to time.... Interestingly, these events do however seem to have unsettled markets a little, who had, of course, become entirely used to plausible predictability from the Banks – even when the Banks were, in fact, wrong about the future.

Indeed, it is without question that the majority of central bankers thought about the Pandemic as representing primarily a “Demand Shock”, and that they largely failed to consider the shock to the supply side and the high demand pressure that this would create. The result of this forecasting process oversight was that Mr Powell and others were giving forward guidance in early 2021 that was consistent with what he thought would be a deflationary world when they were in fact facing an inflationary one.

However, because the Banks target FCI (Financial Conditions Indices that don’t like asset market volatility), the Banks could not simply announce a Pohl-like abrupt change in direction once they realised the error of their ways; they instead had to finesse and stretch the truth in order to support markets and their beloved FCI.

As a result, and despite the recent inflation ‘shocks’, we find that the Federal Reserve clearly still does not want to tighten aggressively and Mr Powell has been at pains to show that he certainly does not wish to disturb the financial markets or undermine the Fed’s beloved “Financial Conditions Indices”, with the result that the FOMC has now been forced into making some rather large and quite brave assumptions over labour market participation rates in order that it could promise the markets the nirvana of both strong growth and falling inflation....

Certainly, this was the overriding theme within Mr Powell’s prepared remarks following the latest FOMC meeting, both during his official text and his answers to what look to have been some rather heavily scripted questions. However, it was also notable that as the Q&A session went on, a seemingly rather less comfortable Mr Powell started to acknowledge however reluctantly that the Federal Reserve was indeed going to have to become rather more (inflation) data dependent in what is becoming an uncertain world. Ultimately, the Chairman was even forced into admitting that, while he did not want to tighten meaningfully now, the day when he might have to tighten was perhaps approaching.

We take from these admissions that the beginning of the end of forward guidance is indeed upon us and, as this becomes more widely recognized, we suspect that the financial markets will want to carry less risk in general and in particular less leverage – the end of forward guidance and the return of less predictable central banks will represent a fundamental sea change for markets over the longer term and one that will likely see risk assets derated.

Meanwhile, on the other side of the Atlantic, the ECB is probably right not to want to tighten at present given the state of the EZ economy, but it’s own unique political and structure meant that it had to jump through some alphabet hoops in order to achieve what it wanted. On balance, the changes in the nature of the ECB’s QE were not good news for those countries with weaker fiscal positions, but we would suggest that the effects will be quite marginal in the near term.

Longer-term, the question of whether the ECB can ever afford to tighten given the effect that falling bond prices might have on government funding costs, the ECB’s own solvency, and the financial system in general remain, but Madame Lagarde seems to have dodged this question for now. The ECB and the Fed may not be diverging yet, but we can see the point at which they do diverge approaching. It is unlikely that the ECB will be able to follow the Fed down a tightening path when that point arrives.

The Bank of Japan sensibly decided not to say much this month but the bottom line remains that it too has become something of a hostage to fortune; when global growth and/or domestic activity weakens and the private sector develops an appetite for JGBs, as has been occurring recently, then the BoJ has little option but to sell JGBs in order to prevent nominal yields from dropping below the Bank’s target. As a consequence, the BoJ is today finding itself tightening in a quantity sense even as the economy weakens. We suspect that this is not a situation that they wished to “broadcast” but it does mean that the BoJ is already diverging from many of its counterparts abroad. 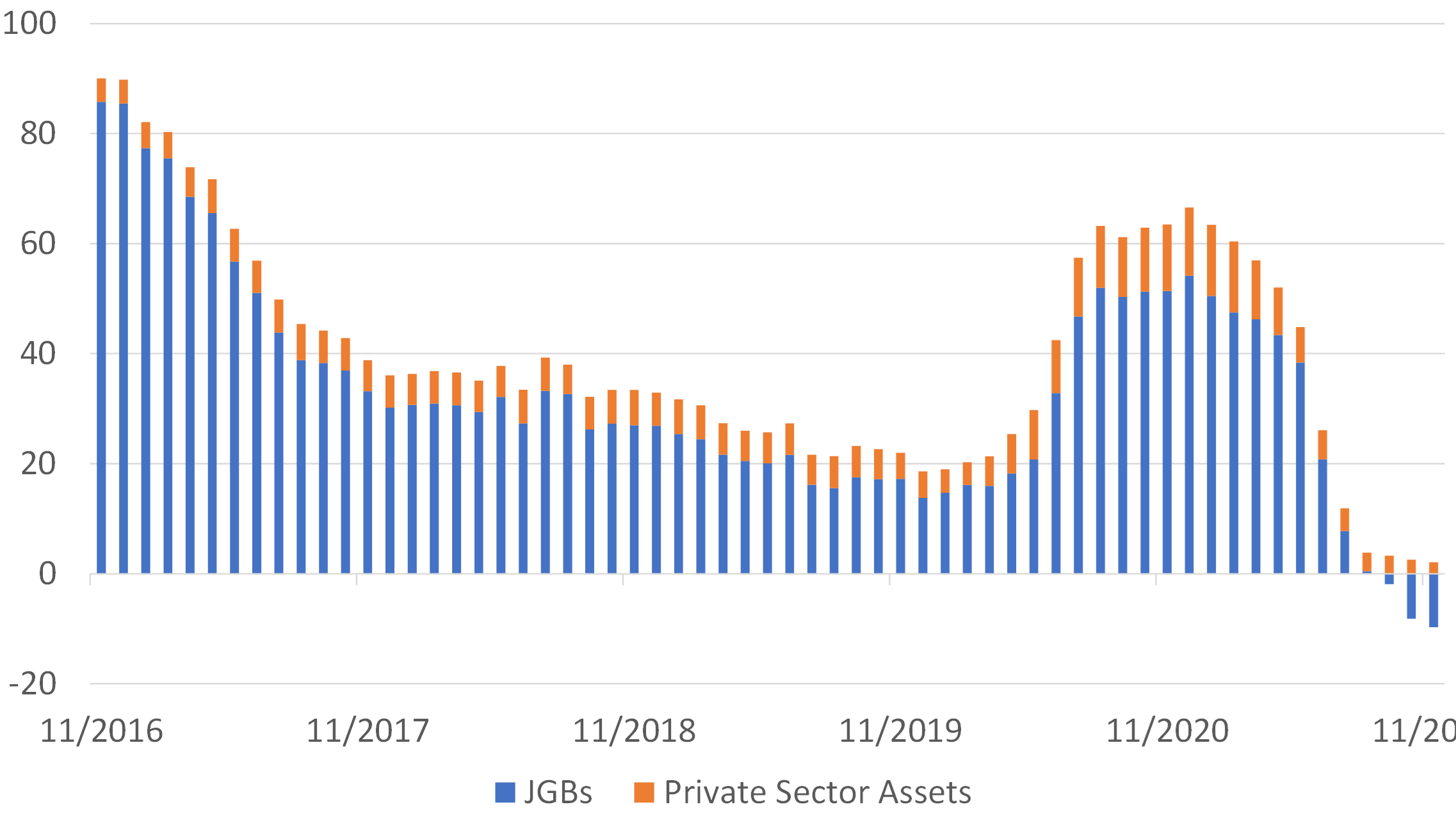 Elsewhere, we would argue that the RBNZ rather uniquely has already gone too far down the tightening guidance route but there will not be any useful data for weeks to sway its course in the near term, while the RBA looks likely to continue to fret about the weakness in household incomes, something that it has not had to contend with for more than 20 years. It seems to us that in a microcosm of the wider world, the RBA and RBNZ are on very different courses that will lead to their two economies becoming desynchronized in a way that we have not witnessed for some time.

Finally, the Bank of England simply did have to act – the economy’s 5% of GDP positive output gap demanded that the Bank had to move and we suspect that there will have to be further moves before too long. The BoE is decidedly behind the curve it seems.

The policy pronouncements and in some cases actions taken by central banks over recent weeks may, at first sight, have appeared quite normal and routine but in fact, we suspect that they may come to mark the beginning of a new period in the “investor-verse”.

Specifically, we suspect that we are coming to the end of the era of forward guidance; central banks, in general, are likely to move back in the direction of being less predictable and this will impact the amount of leverage that the markets will be able to carry over the medium to longer term. Unfortunately, periods of regime change tend to create volatility in financial markets – and financial variables in general - but we, along with many others, believe that if this ultimately improves conditions for the real economy, then this will be a price worth paying in the longer term.