All other countries
by Andrew Hunt, International Economist
04 August, 2022

We have been saying for some time that inflationary pressures within the global goods markets may have peaked (at least for now) and that the global economy is slowing rapidly on the back of what are now very weak real incomes, collapsing monetary growth, and China’s sharp economic downturn (the causes of which run far beyond the country’s zero-COVID strategy). 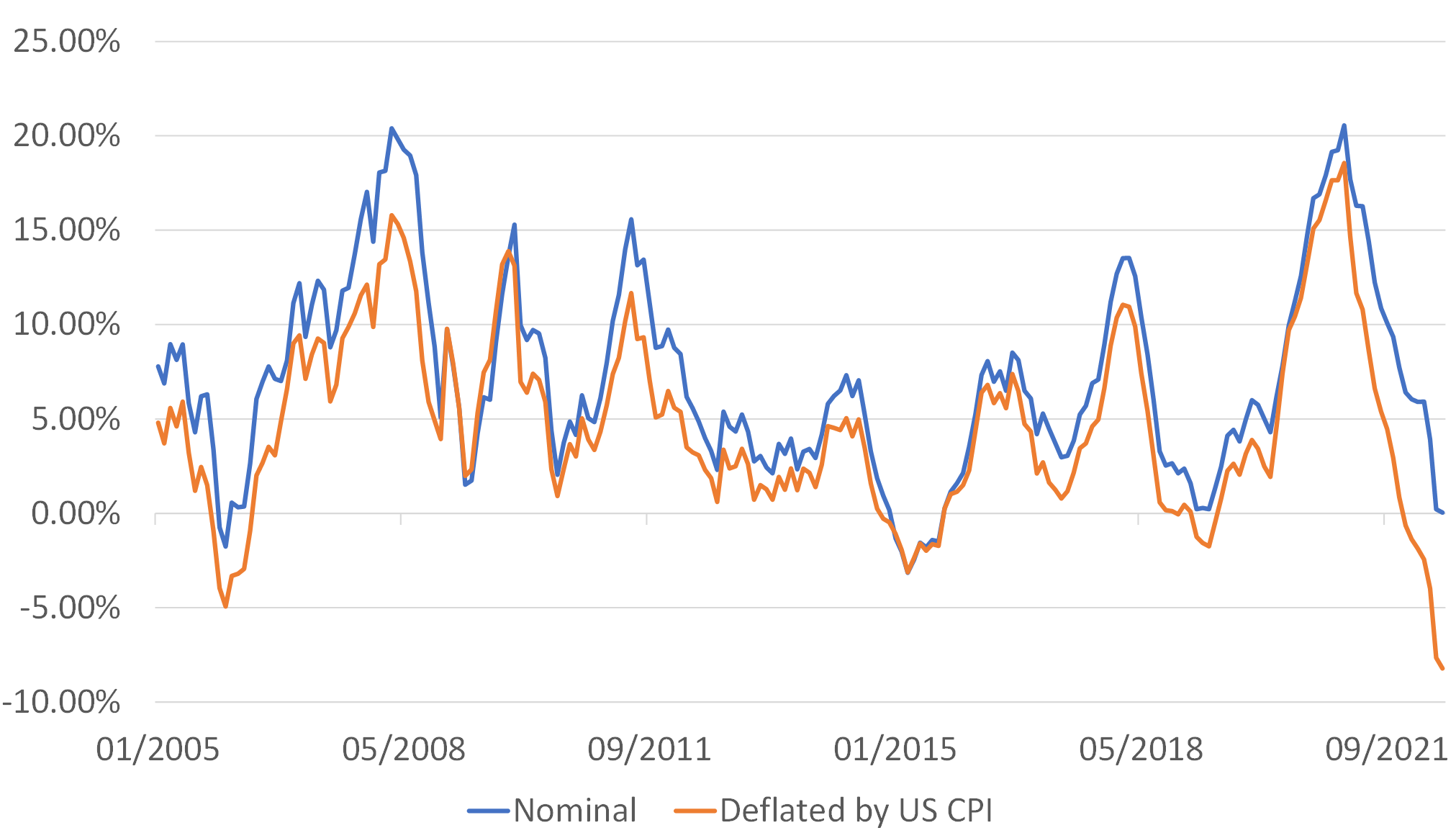 Perhaps a little more surprisingly, the major central banks are beginning to acknowledge these facts; at its latest press briefing the ECB noted the signs of economic weakness but rather counterintuitively used this as a reason to accelerate their rate hikes, while the FOMC was rather more logical in suggesting this week that there might be a pause in its own rate hike cycle later this year if the economy continued to weaken, something that we have also been suggesting might happen for some time.

One thing that has become increasingly clear is that the Central Banks themselves are becoming increasingly buffeted by “unforeseen” events and, as a result, they have been forced to retreat into a more reactive rather than proactive stance. The days of the presumed omnipotent central banker seem to be well and truly behind us. Indeed, the ECB’s Madame Lagarde even went so far as to publicly admit that the Banks’ former policy of forward guidance is “over”.

Since forward guidance was one of the primary pillars of the Post-1990 central banking model, a system that gave rise to many of the extreme moral hazard problems that have afflicted markets over the last 20-30 years, the abandoning of the central banks’ implied policy of seeking never to surprise the markets is (to our minds at least) a very significant event, in that the removal of forward guidance will increase background market volatility and therefore likely reduce risk appetite amongst mainstream investors – we certainly expect households to lower their weightings to equities over time as a result of this shift in policy. 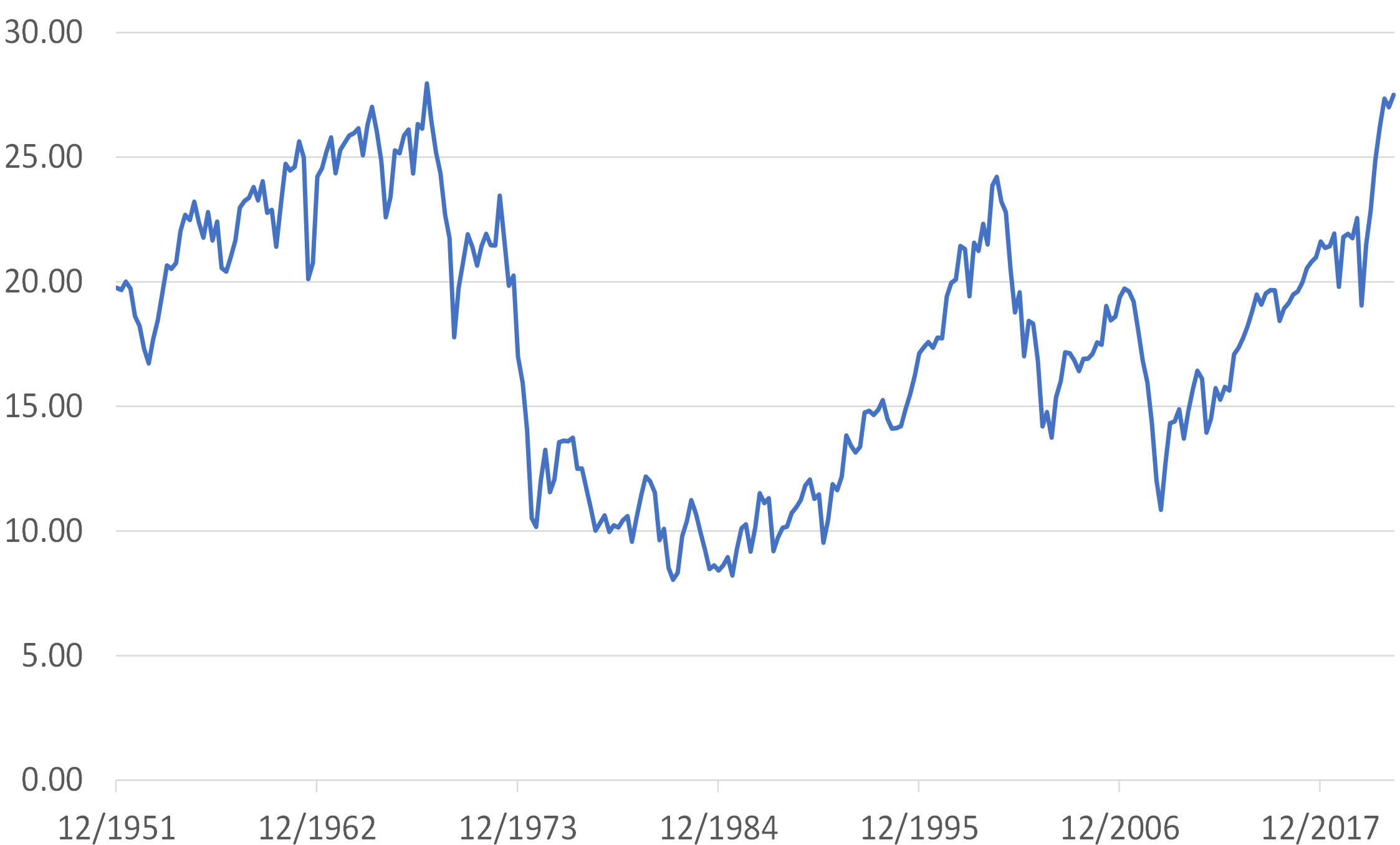 Meanwhile, if it is indeed the case that goods price inflation rates have peaked (and we believe that China’s weakness & the strong dollar imply that this is the case), then it is highly probable that overall headline inflation rates will soon peak on a medium-term basis. However, we must again note that this is very much the result of what is occurring in Asia, and not something that is happening (yet) in the West.

Despite the slow growth being experienced by the OECD economies – and even the news that the US economy is now technically in a recession – the fact remains that output gaps are still positive in the West even now. This implies that service sector and non-traded goods price inflation in the Developed World economies have yet to peak; the recession has not yet been severe enough to reduce demand pressure and thereby control the domestic overheating. It may therefore still be a little too early to look for bargains in the fixed income markets.

Looking ahead, it will be interesting to see whether the Fed reacts to the China-driven moderation within the CPI headline data, or the still inflationary underlying US domestic data when it comes to deciding policy in Q4. At present, it is our view that a strong USD during Q3 (caused by the worsening credit crunch in the offshore USD system) will tip the FOMC into pausing its rate hike policies in October and potentially even suspending its QT by year end.

All this of course would seem to suggest that we should now be preparing to “buy any dip” and load up on duration and equities over the late third and early fourth quarter. This may well prove to be a valid strategy over the shorter term, but for this to be any more than a trade we will need to resolve a few longer-term questions & issues over the outlook for global growth – both in the East and West.

Since the GFC it has been important not to invest according to what the state newspapers said was happening with regard to growth in China, but according to what was happening in reality. This, of course, is why we developed the China Gravity Index, a series that possesses a much stronger correlation with global trade & commodity price trends than does much of the available official data. 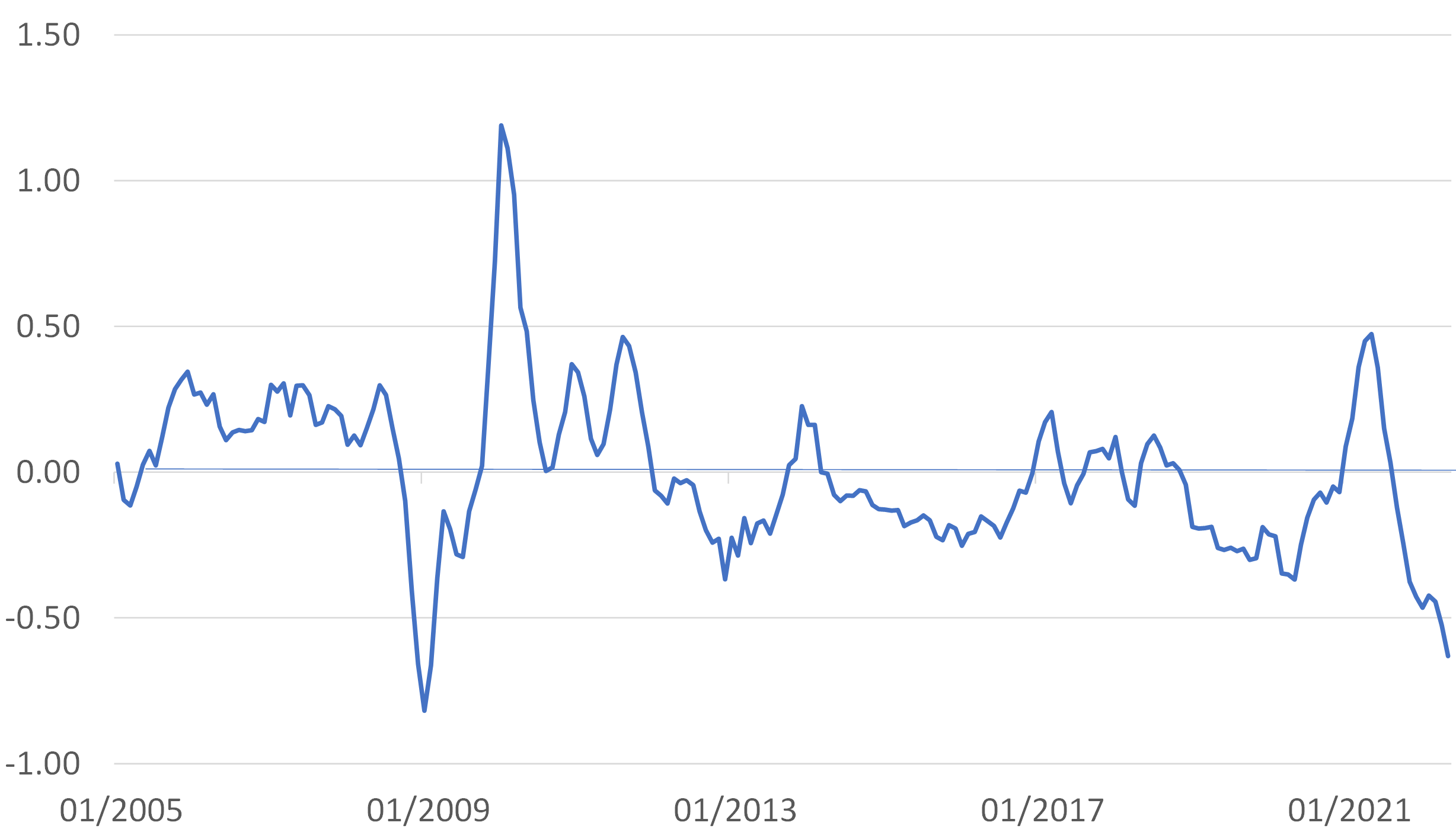 Clearly, China’s economy is very weak at present, and we also believe that this in part the result of the authorities’ implicit desire to create a $1 trillion trade surplus simply so that it can repay its still very substantial foreign liabilities without excessively depleting its FOREX reserves. Of course, such an overtly mercantilist trade policy that is being used to finance debt repayment is an inherently highly deflationary stance when it comes to its effects on the rest of the World. Hence, global goods price inflation has peaked for now.

The bigger question of course now becomes what happens next year? Will Beijing be able to restart the economy and thereby send the Gravity Index upwards and therefore back into (global) inflationary territory? If Beijing can restart the economy next year, then global inflation will most likely return by the end of 2023.

However, China’s economy has for forty years relied extensively on credit in order to finance its growth, be it the private or the public sector. Within China’s economy, the banking system is - and will likely remain in what will continue to be a highly regulated system - the dominant source of credit. Unfortunately, we believe that China’s banking system has now reached or even exceeded its physical limits to growth – it can no longer fund more credit. But, without credit, growth within the PRC will likely remain compromised.

Therefore, it is not impossible that China merely witnesses lower rates but no credit growth next year - a scenario that will of course be eerily familiar to anyone that covered Japan during the late 1990s and 2000s.

If China’s credit system is as broken as was Japan’s thirty years ago, then China will not recover, the Gravity Index will continue to slip, and the economy will export deflation not inflation, with all that this entails for the global economy.

Next year, it will be absolutely vital to get the direction of travel of China’s domestic economy right and we suspect that there is a 75% probability that Beijing will not be able to turn China’s economy round next year.

There are of course other possible scenarios that could conceivably occur. For example, if Beijing were through some means able to find a way to successfully reflate its economy, and at the same time the Western central banks suspend their tightening measures and act together to create a global inflationary boom in 2023H2, then there would be a coordinated global recovery. Such a scenario would complete the mid- and late – 1970s narrative, and we believe that the resulting inflation would be highly toxic for fixed income markets and equity valuations in general. This is certainly one possible scenario, but we would only give it a 10-20% probability.

Alternatively, we might also wonder whether the central banks in the West have already allowed monetary conditions to become too tight as they continue to ignore quantity measures / bank funding regimes / the impact of the regulatory environment. We could also wonder whether the private sectors would be willing to participate in another monetary boom quite so soon after the mega-boom of 2020-21. People are now more indebted, property is expensive, and incomes have been undermined. It may be that the West is already headed for a deep recession during 2023 that will now also be difficult to arrest. We would give this a 60% probability at this time.

All of this gives us a conditional probability of both the West & PRC being weak at the same time in 2023 of some 60% x 75% = 45%. There is, therefore, a 45% probability of a global recession that is at the very least dis-inflationary and potentially even deflationary in 2023.

This of course notionally gives us a remaining 40% to cover weak PRC / strong West or vice versa; a middle ground that probably leaves inflation high but stable and global growth modest – a soft form of stagflation.

In other work, we have however argued that political stability and the fostering of an environment in which real wages rise in the West will require a resetting of the internal price matrices within economies. Specifically, we believe that goods prices must rise relative to non-traded goods / services / property prices. However, this implies that if China is to remain weak and goods prices are not rising, then there will have to be deflation in the Western economies - a situation that would require deep negative output gaps and very weak credit systems in the West.

This long-term equilibrium requirement implies further conditionality on our outcome probabilities, and we would suggest that from a practical perspective it lifts the probability of significant global dis-inflation / deflation over the medium term to over 50%. In fact, we suspect that it only really allows us three possible outcomes for 2023-5, namely:

For analysts, the key questions to answer over the next 12 months will be whether the PRC authorities can indeed restart their economy, and whether the Western authorities have so damaged their own systems that further stimulus – even if they are offered – cannot restart their systems. Markets may at this time want to welcome the notion that nominal interest rates my never really rise by as much as some feared, but a Japanesque combination of perpetually low rates, economic stagnation, and zero credit growth would be a much more damaging outcome for asset prices over the longer term we suspect. It seems that there are many questions that will need to be answered before formulating an investment strategy for 2023.