All other countries
by Andrew Hunt, International Economist
07 March, 2022

It has been pointed out by several commentators that the Western World now has a public sector burden that bears a troubling resemblance to the immediate Post-war period in the late 1940s and 1950s; a private sector debt burden that bears comparison to the late 1990s / early 2000s; and an inflation problem that is beginning to look like the 1970s. Now, we would add that it has a “Cold War” situation that looks like the early 1980s (Afghanistan / Proxy Wars between superpowers).

Arguably, the first two factors and the loss of the “peace dividend” implied by the last factor argue for higher (real) yields on a trend basis, while the third factor – namely high levels of private sector debt – potentially argue that yields can never rise “significantly” without creating a credit event. In the near term, we can expect markets to look towards higher real rates but ultimately, we suspect that central banks will have to focus on the fragility factor.

We must confess that at the time of the fall of the Berlin Wall and the demise of the USSR, we were rather cynical about the likely significance or even existence of a peace dividend. Although it was likely that countries would be able to spend less on defence going forward, the rebuilding of the East (including East Germany) was always going to absorb a lot of capital (in fact, the costs of rebuilding East Germany placed so much pressure on real yields that it caused the European Exchange Rate Mechanism to shatter in 1992), and we always suspected that if politicians did not spend money on defence, then they would find something else to spend it on. We might have stopped building aircraft carriers, but governments still found a way to expand their budget deficits nonetheless. 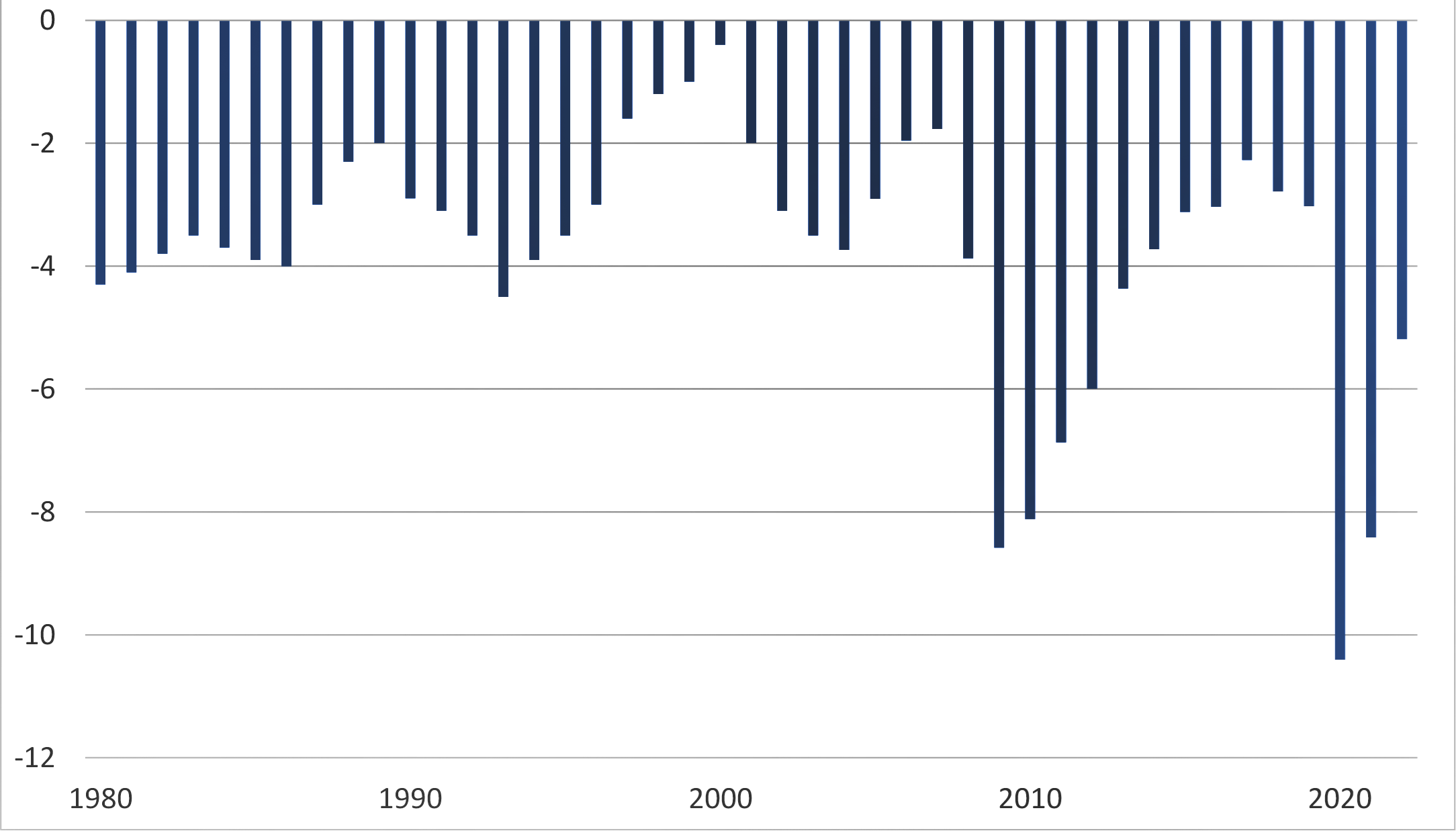 Looking ahead in the new more geopolitically challenging environment, we can assume that government expenditure on defence is going to have to rise by one or two percentage points of GDP, which either implies still larger budget deficits, higher taxes, or reduced levels of expenditure on non-defence items. We suspect that it will be a combination of all three that ultimately occurs.

The change in relations with not only Russia but also China will also impact global trade trends. We are of course familiar with the recent increase in trade tariffs but more specifically we suspect that China’s attempts to move its export product mix up the value-added ladder into more profitable capital goods will be thwarted by Western concerns over data gathering and control. This will cast doubt on China’s long term development model but if the West is going to have to “live without” PRC goods and perhaps even “Tik-Tok” as it worries about “data”, then it will result in some pressure on prices. Geopolitical tensions usually raise long term inflation rates, while detracting from growth. Committing manpower and capital defence often undermines productivity (historically, this was a problem for empires from the Roman to the British Empire) and this tends to result in a degree of stagflation.

Perhaps more positively, although it is true that deteriorating political relations imply economic costs in the near term, we might also argue that the terms of China’s membership of the WTO were economically inefficient (the result of Western hubris and its belief that by letting the PRC into the WTO on favourable terms it would change China – something that has not happened), while making non-renewable energy more expensive may have benefits for the environment. Parts of the global economic system needed a reset, and the events of recent months may be useful in forcing this resetting of certain parameters (although financial markets rarely appreciate such longer-term factors, even when they are positive for the Global Economy).

In fact, we suspect that markets will focus on the potential for lost growth, be it from reduced globalization flows or even reduced levels of capital movements. Rising tensions have already led to an increased level of regulation and supervision within global capital flows and we can expect more to follow over the coming months – we will all likely face higher compliance costs and lenders to these countries have lost an important source of revenues. It should be remembered that 40% of the assets of the French banking system are held outside of France, while in Japan the ratio may be around 30%. Many of these assets are held in EM that will be affected by the rise in geopolitical tensions.

With regard to the Russia Crisis specifically, Europe’s reliance on hydrocarbons is already well known but Russia is also an important importer of goods from the Rest of the World and Europe in particular. 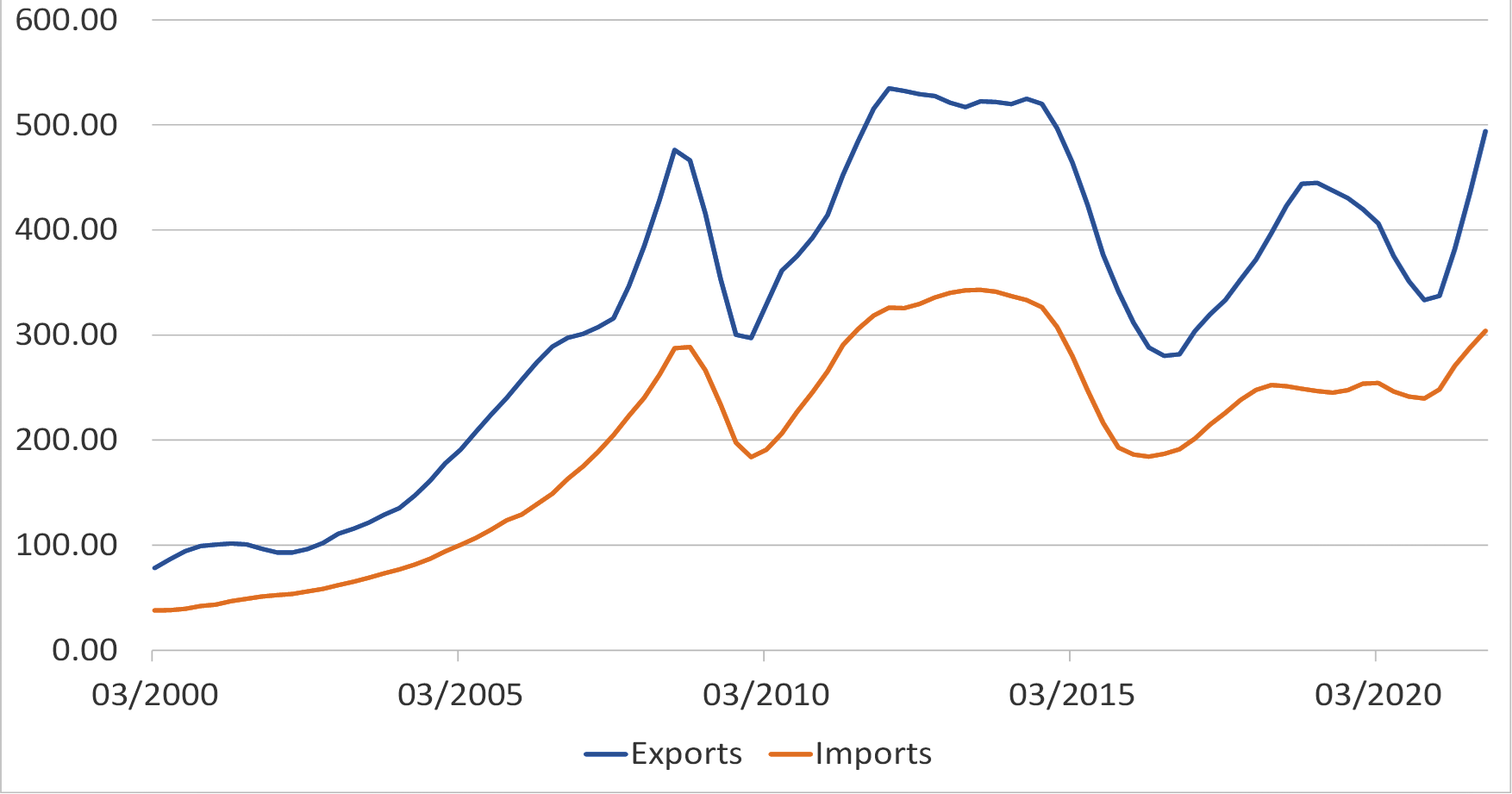 Aside from the obvious threat from a “hot war”, our biggest concern over recent events is centred on what the situation implies for the ECB. Even before this week’s events, the Euro Zone was already in the midst of its worst import price “crisis” since 1973 – led of course by energy prices. In aggregate, import prices are up by around 25% over the last year and higher import prices imply a transfer of wealth and incomes from the importer to the producer. Consequently, they tend to be detrimental to the growth prospects of the importing nations. However, given that energy goods account for 25-30% of the EZ consumer price indices, these events also cause a rise in reported inflation.

In a recent interview, the new President of the Bundesbank and ECB Board Member Herr Nabel suggested quite explicitly that, unless EZ (or German) inflation was forecast to be below four percent this year, he would vote for a tightening of policy by the ECB in the latter half of this year. His views have been echoed by some of his colleagues at the ECB.

This recessionary outcome is certainly not inconsistent with ‘reality’. Given Europe’s inflated debt burdens and the dependence of governments’ day-to-day fiscal financing on the ECB via both the Asset Purchases and TLTRO lending schemes, we firmly believe that any tightening by the ECB could cause sovereign spreads to spike, credit growth to implode, and quickly plunge the EZ into a recession, particularly given the weak real income situation that we alluded to earlier (i.e. that caused by the rising cost of living).

In practice, Herr Nabel is therefore suggesting (quite transparently in his recent speech) that, following a quick post lockdown boom, Europe’s economies (the majority of which haven’t grown since 2018-19) should be plunged back into a recession after two years of suffering from the differentiated effects of the Pandemic.

We fully understand Herr Nabel’s views on inflation, the control of which is of course the ECB’s primary function. We do not question or even disagree with the mechanics of his analysis. We would also add that higher energy prices and Europe’s proximity to the War imply that the region is indeed poorer, and that real GDP probably should therefore be lower. However, outside in the real world, we believe that plunging the different nation states of Europe into a recession – the effects of which will not be felt uniformly – will trigger an existential crisis within the EZ.

Indeed, this could be the biggest such crisis ever faced by the EZ and it could indeed break the Euro Experiment if the ECB pushes ahead with the hawks’ agenda. Ultimately, we expect the ECB to pull back from the brink and not tighten, but the next few months will likely witness a sharp increase in intra EZ instability.

We suspect that, had the events in the Ukraine occurred at a time during which US liquidity was booming, then financial markets might have reacted but been supported by the “Teflon” that liquidity often provides. We did after all see an asset price boom occur in the midst of a global pandemic that was clearly making the world poorer not just in health terms but also in terms of what it could produce.

Today, the US money supply is not growing and it may even be deflating – monetary conditions are therefore tight, although the FOMC appears only to look at Financial Conditions that are determined by prices not quantities. However, if this week’s events cause asset prices to continue falling, then the Fed’s beloved Financial Conditions Indices will also start to show a tightening, which should lead to some moderation in the markets’ expectations for short term rates (even as energy prices push inflation higher).

We must admit that we had been feeling a little “lonely” in our predictions that a US recession was not only necessary in order to deal with inflation but increasingly likely given just how tight monetary conditions have become, but the tragic events of recent days make the recession call easier. In this regard, we are reminded of a similar situation in which we found ourselves in 1990. Then, as today, we were calling for an imminent recession as monetary conditions tightened but the spike in energy prices associated with the Gulf War resulted in this forecast being fulfilled somewhat sooner than even we had anticipated; given the monetary fragilities that we have been writing about of late, the events in Ukraine may once again provide the coup de grace to global growth later this year – not just within the EZ. 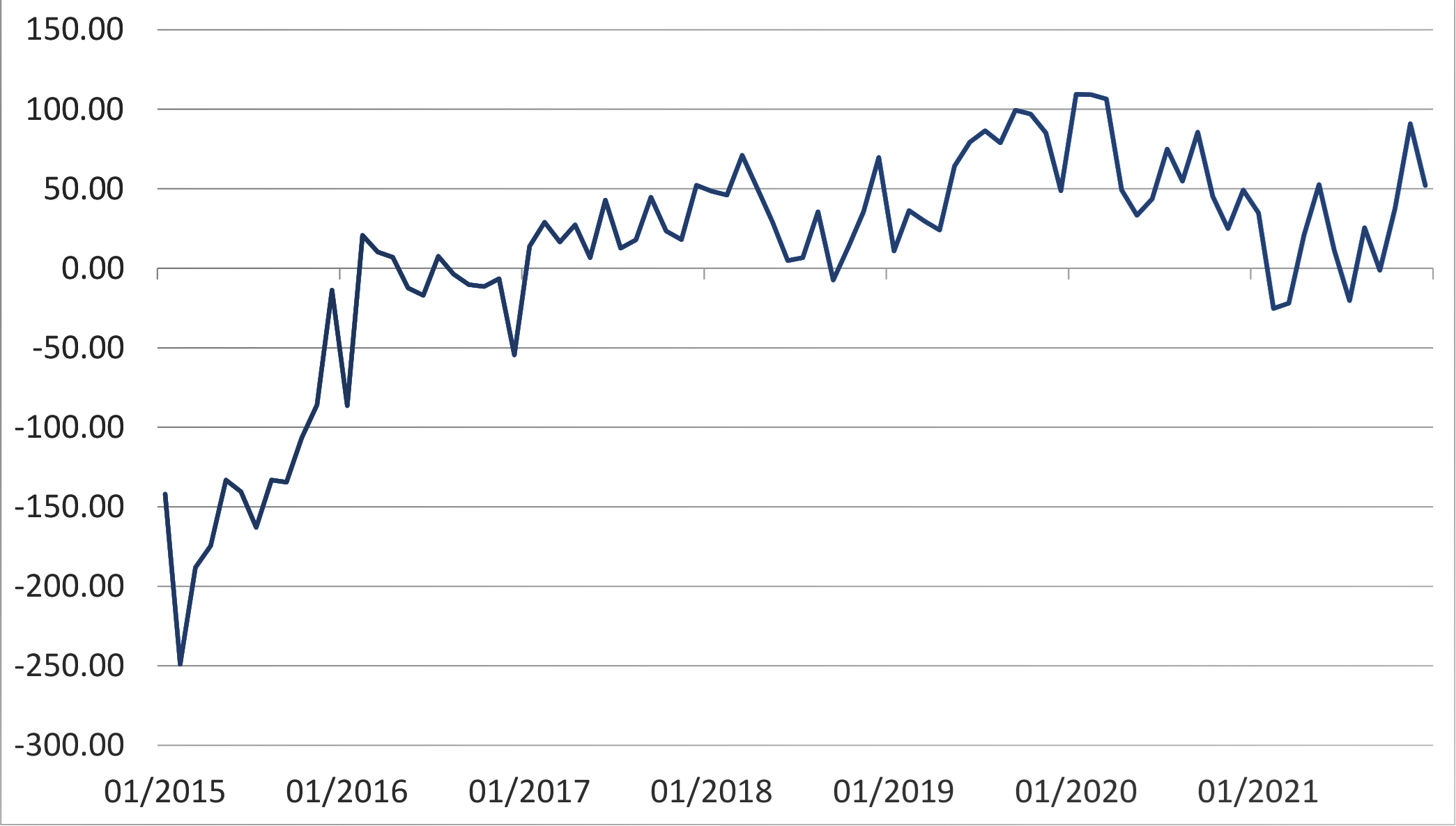 Russia’s balance of payments appeared strong on a flow basis 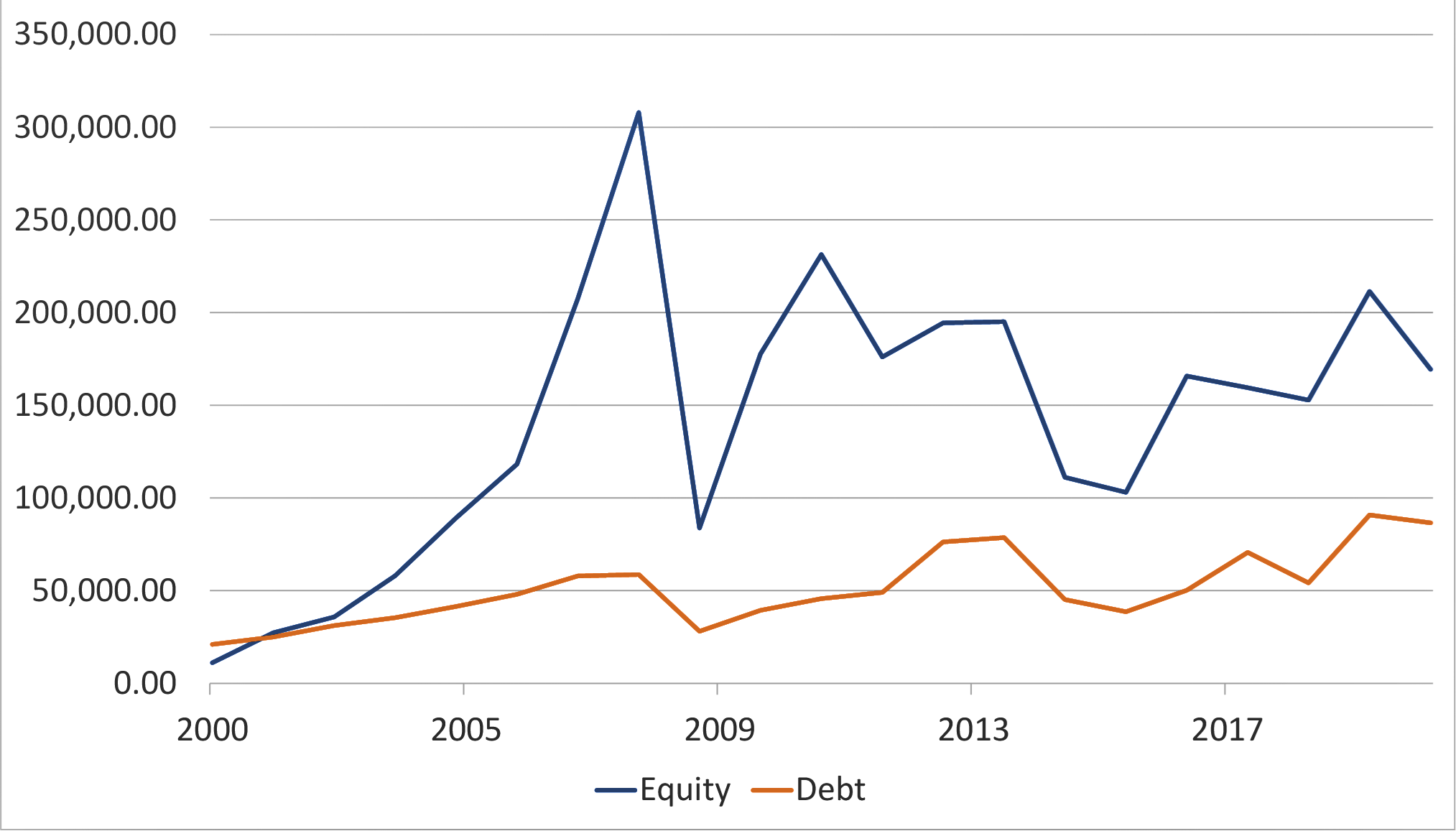 But as the behaviour of the Rouble is revealing, foreign investors possessed a large stock of claims on the country 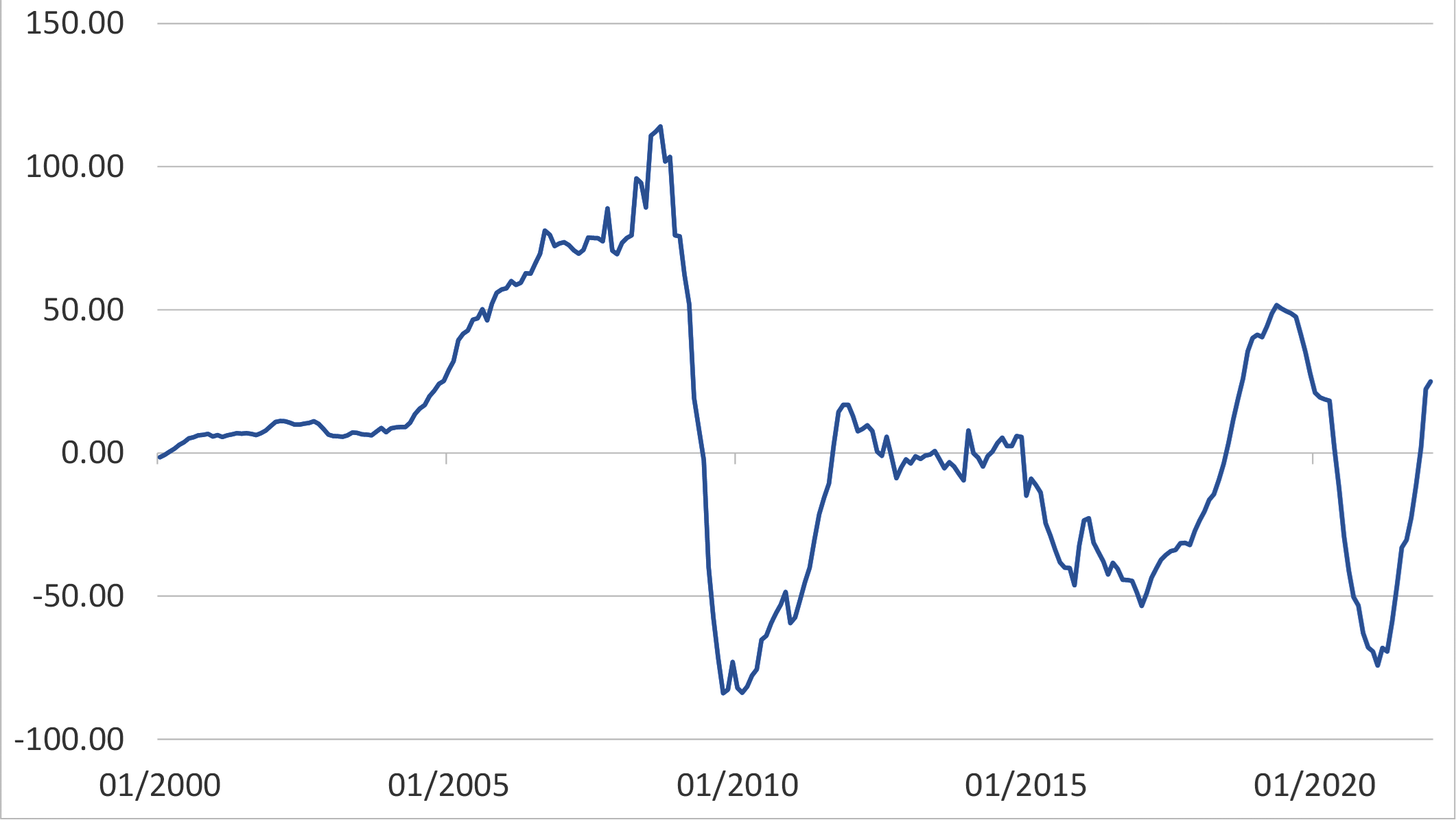 Putin’s regime may have a budget surplus, but it will face acute refinancing difficulties. 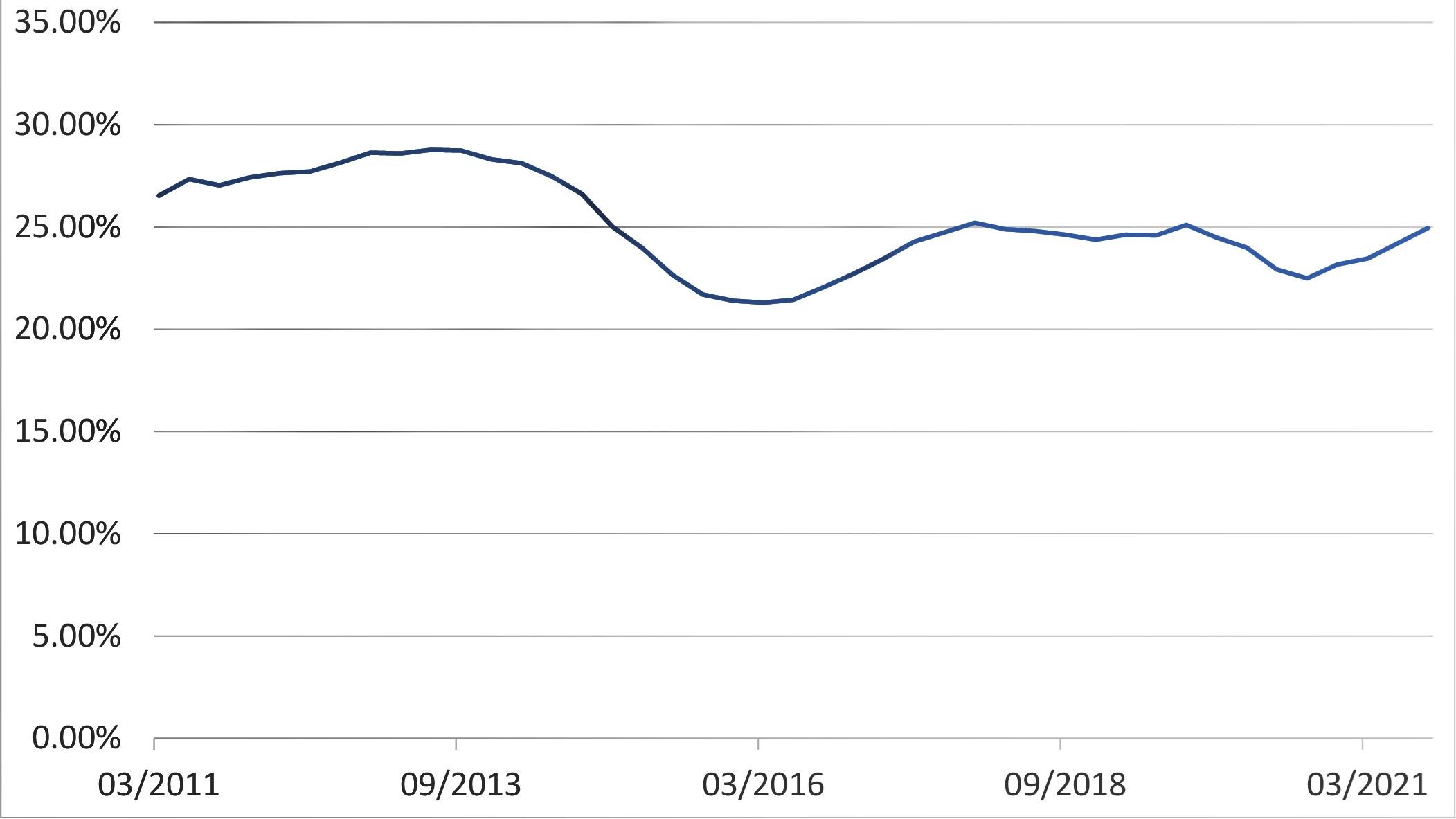 The Russian economy has a high import penetration ratio. 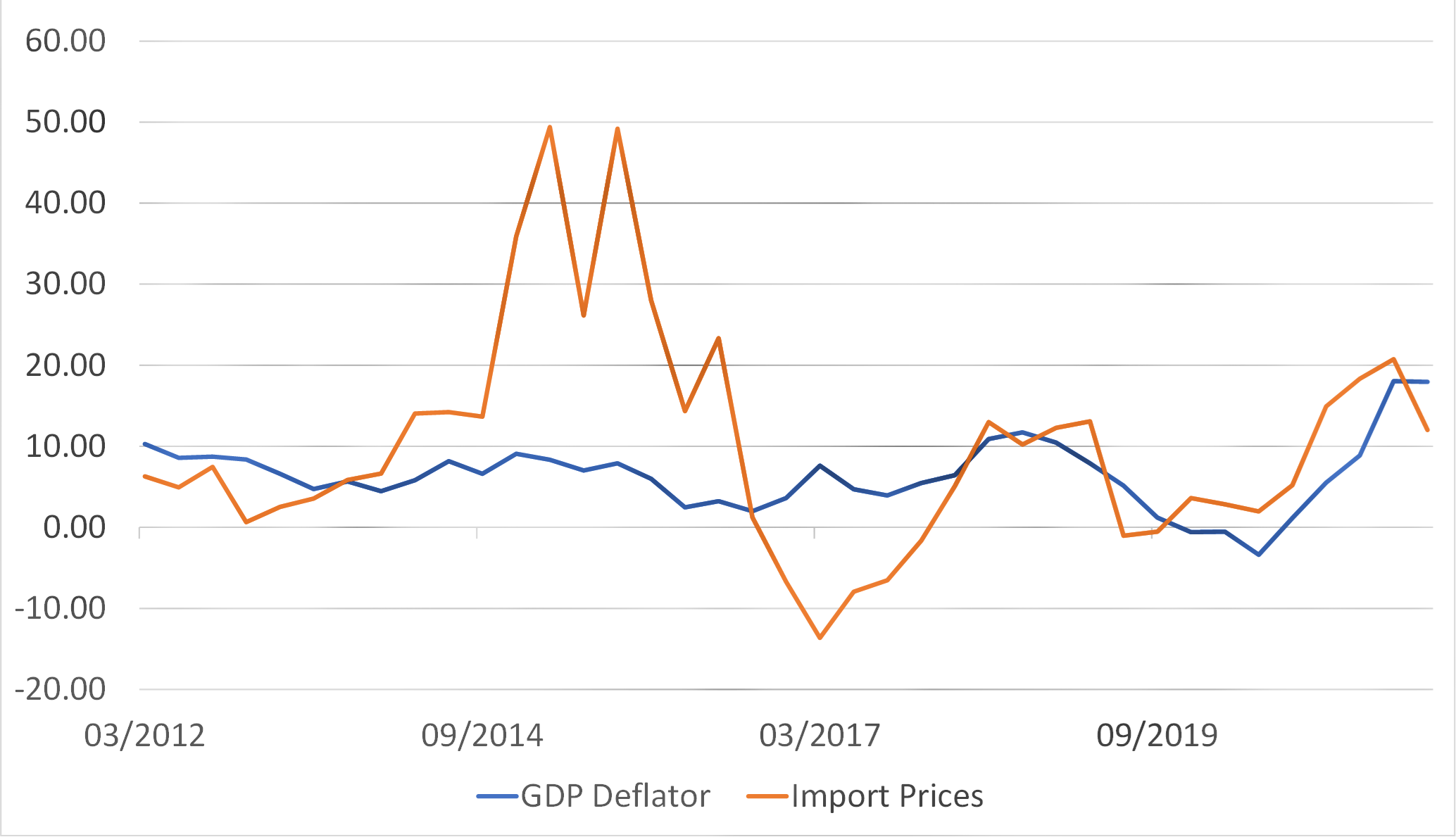 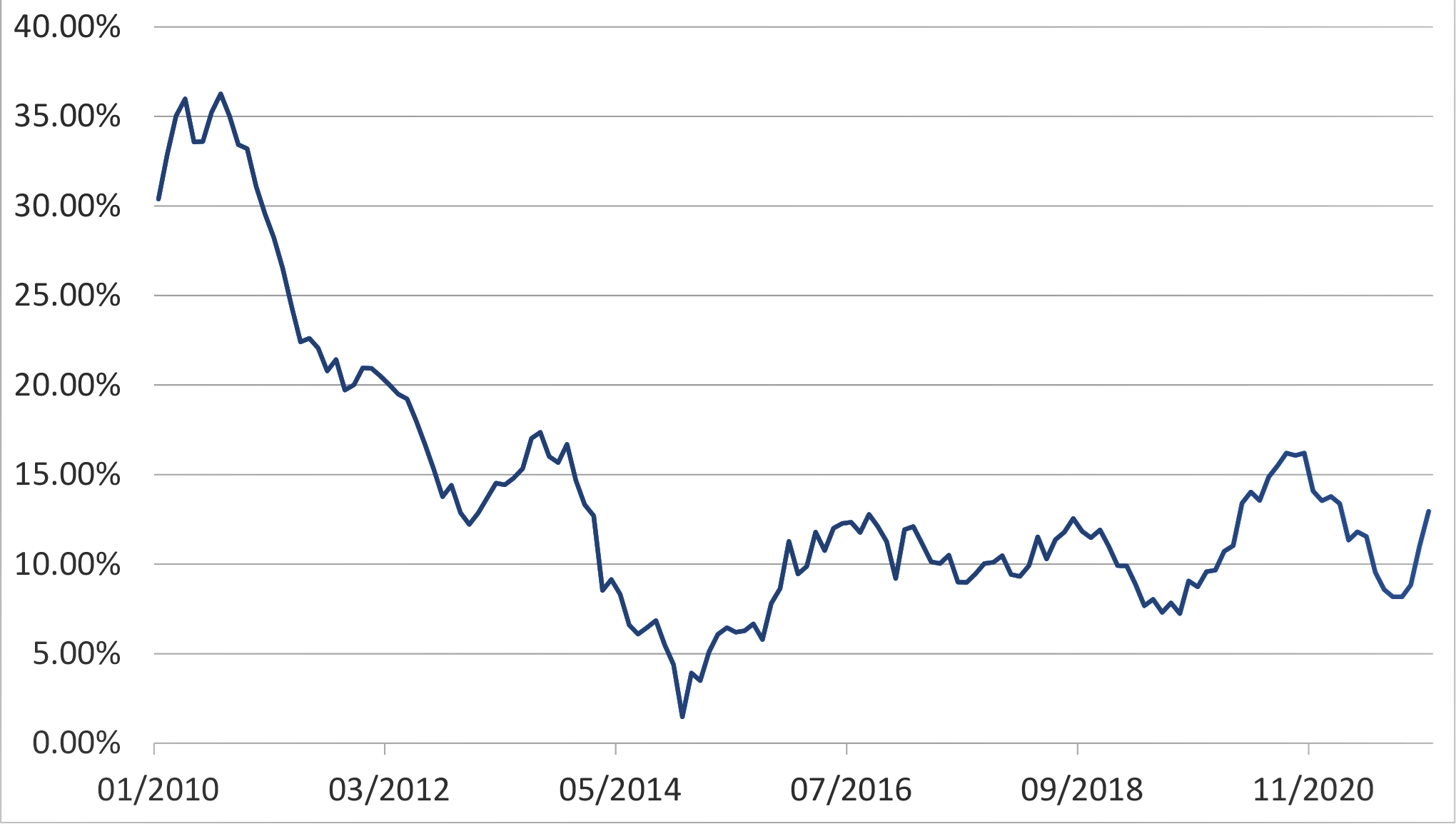 We can imagine that the internal demand for money may be undermined not just by the collapse in the Rouble’s external value, but even by a possible loss of confidence in the Regime. With monetary growth accelerating as well, a monetary inflation is entirely possible at this juncture. Could Putin now follow Erdogan into monetary chaos?.

High inflation in Russia has often posed a threat to political stability (i.e since the time of the Tsars.)

Read more of Nikko AM NZ's response to the current situation, what this means for your investment and what we are doing to minimise the Russian exposure in our funds.
Back to top