Rise by Japanese equities expected to gather momentum in 2022

All other countries
Download as PDF
by Naoki Kamiyama, Chief Strategist
12 January, 2022

Year ahead for Japan equities: Government policies, TSE reshuffle and exports in focus

After gaining a little less than 5% in 2021, we believe the Nikkei could be on course to rise more than 10% in 2022. There are several reasons why the Japanese market underperformed in 2021, and our view is that efforts to address the issues that weighed on equities will play a key role in supporting the market throughout 2022.

Why did the Japanese equity market underperform in 2021?
A key factor that contributed to Japanese equity underperformance in 2021 was the limited scale of the government’s stimulus for the pandemic-hit economy. Compared to that of countries such as the US, Japan’s stimulus was smaller in per capita terms and thus unable to significantly boost domestic demand. Another factor that capped equities was Japan’s initially slow response to the pandemic. The Japanese healthcare system barely kept up with the surge in infections in 2021 as many of the country’s hospitals and clinics are privately run, limiting the number of medical institutions that the government could mobilise during medical emergencies.

Changes we can expect in 2022: Japan’s fiscal and coronavirus policies
Japan appears poised to address the issues that weighed down its equity market in 2021. In a case of better late than never, the administration of Prime Minister Fumio Kishida, who took office in November 2021, authorised a large fiscal package aiming to support low income households and young people, which should buoy the economy by stimulating spending. The administration is also working to improve the government’s response to the pandemic. Plans include setting up large field hospitals to admit patients in case of subsequent waves of infections. Japan is also poised to roll out Pfizer’s oral treatment drugs nationwide in addition to antiviral medications developed by Merck. We expect such measures to enable the government to avoid lockdowns and normalise economic activity, even if the country experiences further waves of Covid infections.

Steady support from TSE’s reshuffling
In a bid to enhance the global competitiveness of the bourse, the TSE is scheduled to reshuffle its market segments in April 2022. The current TSE First Section, Second Section, JASDAQ (Standard), JASDAQ (Growth) and Mothers will be reorganised into three new segments: Prime, Standard and Growth. The Prime section will be for companies that are capable of “constructive dialogue” with investors, the Standard section will be geared towards companies that have sufficient liquidity and possess adequate governance levels for investors in an open market, and the Growth section will focus on companies with high growth potential. Until now, the TSE has maintained a tiered structure where companies aim to step up to the next level, but, after the reshuffle, more emphasis will be placed on how listed companies are categorised. The changes may not result in TSE-listed companies going through an overnight transformation, but we expect the reshuffle to introduce steady, long-term positive change by encouraging firms, particularly those in the Prime segment, to increase the diversity of their boards (especially external directors) and further unwind cross shareholdings.

Robust exports and potential implications
We expect Japan’s exports to play a key role in boosting the economy and in turn allow the equity market to extend gains in 2022. Thanks to strong demand created in the US as a result of Washington’s robust fiscal stimulus policies, Japanese exports (excluding the effects of currency exchange rates) recently saw the strongest growth since the Global Financial Crisis. If US demand remains robust in 2022, we may finally see Japanese companies use their excess cash to increase the production of export items. Companies using their excess cash for production and capex will stimulate the economy and pave the way for deflationary pressures to dissipate; it will also have the added advantage of laying to rest any argument that a low inflation environment favours Japan at a time when countries are grappling with the negative effects of inflation.

Market: Japanese stocks rise in December as market assesses Omicron and the Fed

The Japanese equity market ended December higher with the TOPIX (w/dividends) up 3.45% on-month and the Nikkei 225 (w/dividends) rising 3.62%. Although concerns regarding the future outlook for China’s economy and the spread of the COVID-19 Omicron variant weighed on share prices, such fears were somewhat alleviated by reports that the new variant may be less likely to cause serious symptoms than previous strains. Additionally, investors were relieved as the outcome of the December meeting of the US Federal Open Market Committee (FOMC) was largely as expected. Strong year-end retail sales numbers in the US also buoyed the market, contributing to the overall rise. Of the 33 Tokyo Stock Exchange sectors, 31 sectors rose with Marine Transportation, Iron & Steel, and Warehousing & Harbor Transportation Services among the most significant gainers. Only the Information & Communication and Precision Instrument sectors declined during the month. 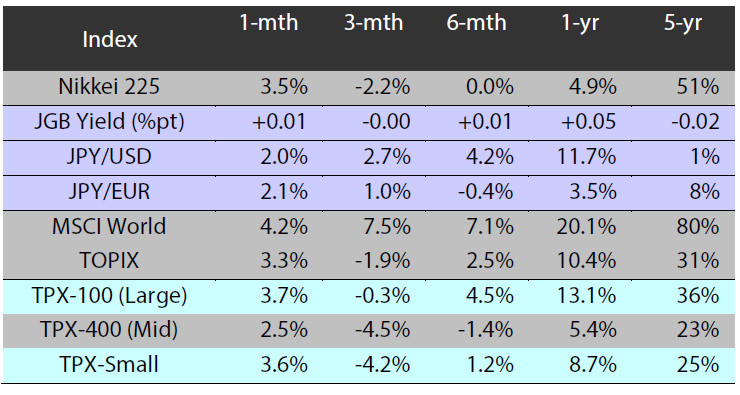 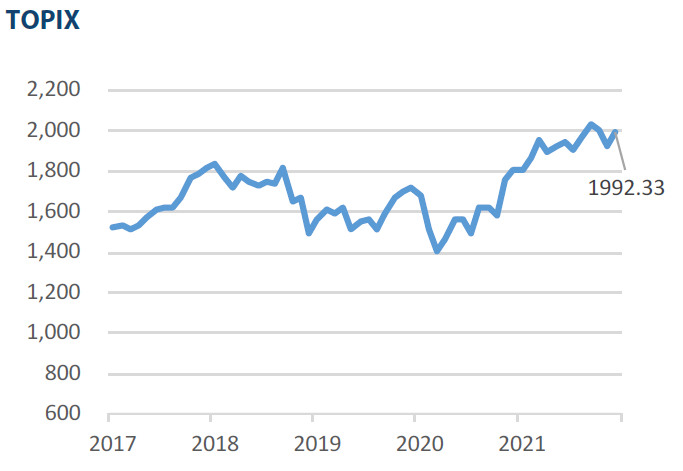 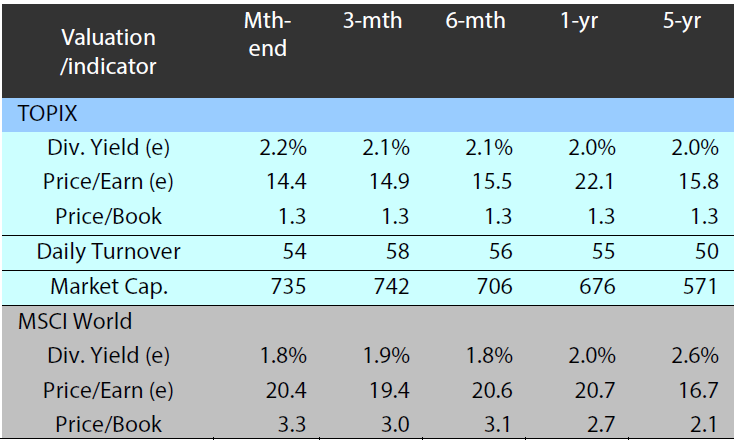 (e) stands for consensus estimates by Bloomberg. Turnover and market cap in JPY trillion. Source: Bloomberg, as at 30 December 2021 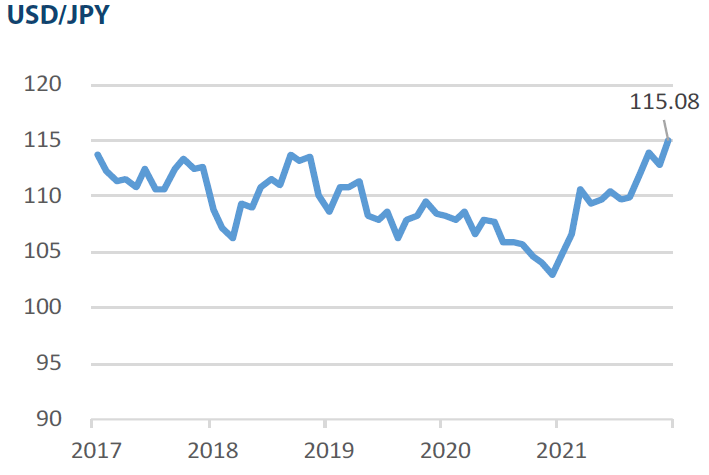