Dire Straits? Or a New Era

All other countries
by Andrew Hunt, International Economist
28 June, 2022

“That ain’t workin’, that’s the way you do it. Money for Nothing and …… Mark Knopfler and Gordon Sumner, 1985

Last month’s ever austere Bundesbank Monthly Report contained an essay on Pension Reform in Germany. The article is quite long but suggests that the German Pension system only has two long term options to maintain its solvency: either accept that the purchasing power of pensioners is set to fall; or the retirement age will need to rise to 69 or higher by the year 2070. Either pensioners will have to accept less in the future in real terms or work longer – the choice seems stark.

In fact, this report does not tell us anything that is fundamentally new; the original UK Beveridge Report of 1944 suggested that the retirement age needed to be set at “Life Expectancy Minus Two Years” in order to keep even its then still relatively basic system solvent. Unfortunately, subsequent governments around the World and of all political hues have wanted to promise rather more than this to their voters and have therefore been necessarily keen to avoid the maths, initially by simply ignoring it by seeking to pay pensions on an unfunded basis from current tax receipts at a time when demographic and growth trends were more forgiving to their cause. However, since demographic trends turned adverse and productivity growth slowed, European policymakers and pension administrators have finally had to start to think about the issue, albeit some 20 years too late.

At a policy level, the US authorities have perhaps been equally negligent, but the US private sector apparently thought of an alternative solution to the problem. Instead of earning the money with which to retire, people could simply borrow it....

One of the first reports issued by our fledgling company back in 2001 looked at the question “can we afford to retire?” Its central conclusion was that once productivity growth and real interest rates (i.e. returns from the real economy) declined, savers had been forced to move out the risk curve. In a problem that is probably familiar to many reading these pages, it seemed that if returns in the conventional markets looked likely to be insufficient, then people were forced to take on more risk, firstly by moving into riskier instruments but also by levering up into stocks, carry trades, and complex structures.

In the chart below, we show just how financial system leverage has been used to replace actual savings (i.e. foregone consumption) over the last thirty years. It was not only that the lack of real value-added growth in the Western economies forced people towards using leverage, it also seems to be the case that people turned to leveraged speculation so that they could side-step the sacrifices that are implicit in saving. 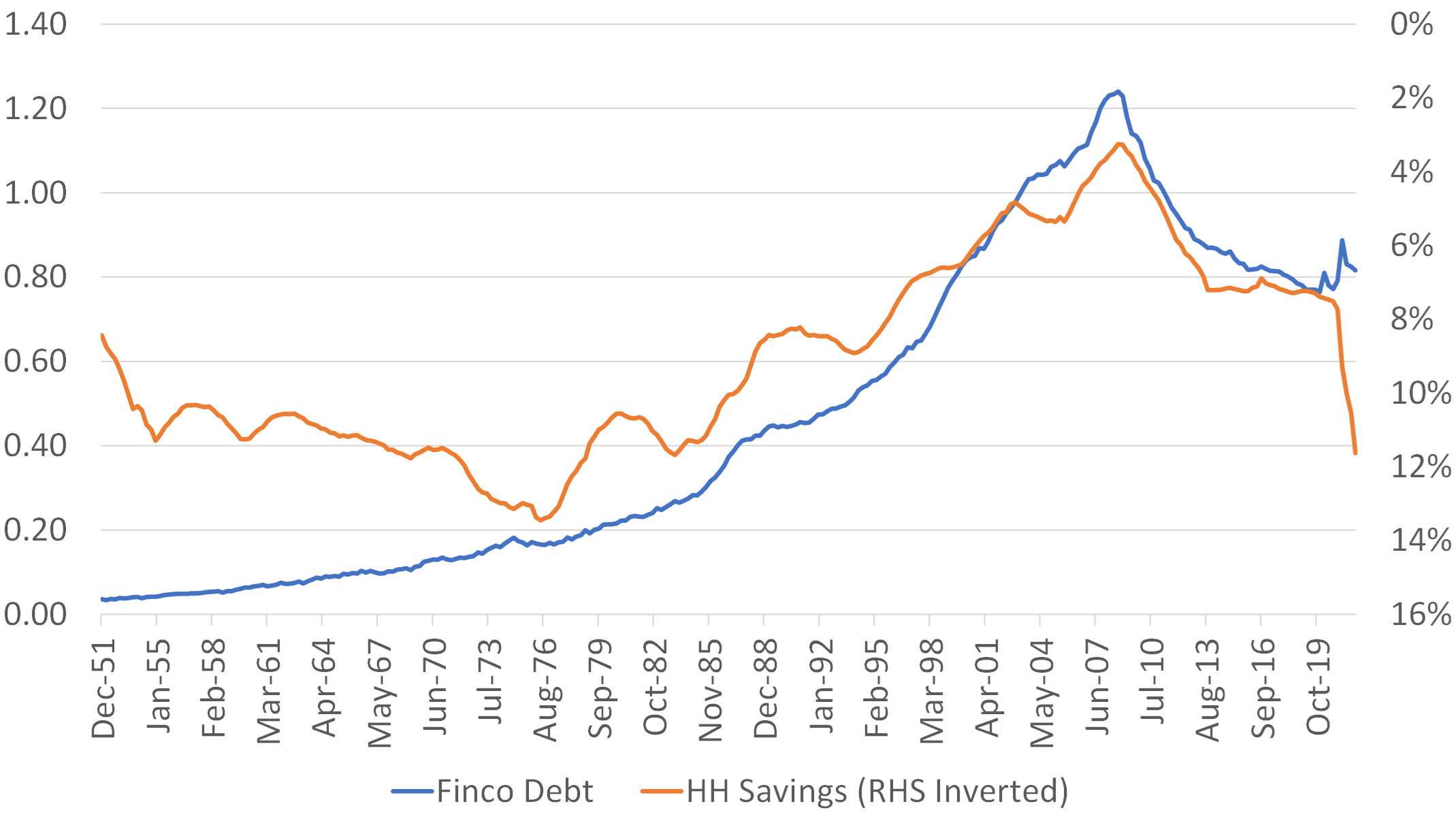 Given the 1985 release date of Dire Straits’ “Money For Nothing”, we must wonder if Messers. Knopfler and Sumner knew rather more than they realized at the time. At this point, even the band’s name also starts to look rather worrying….

In practice, the “Money for Nothing” mantra probably did not reach its zenith until the Pandemic. As a series of shocks to the global system conspired to reduce aggregate supply, the central banks used QE, Asset Purchases, PEPP and a host of other schemes in order to throw money into systems that simply could not produce more (or even as much as they had previously). Hence, we witnessed an extreme divergence between the real and financial economies. 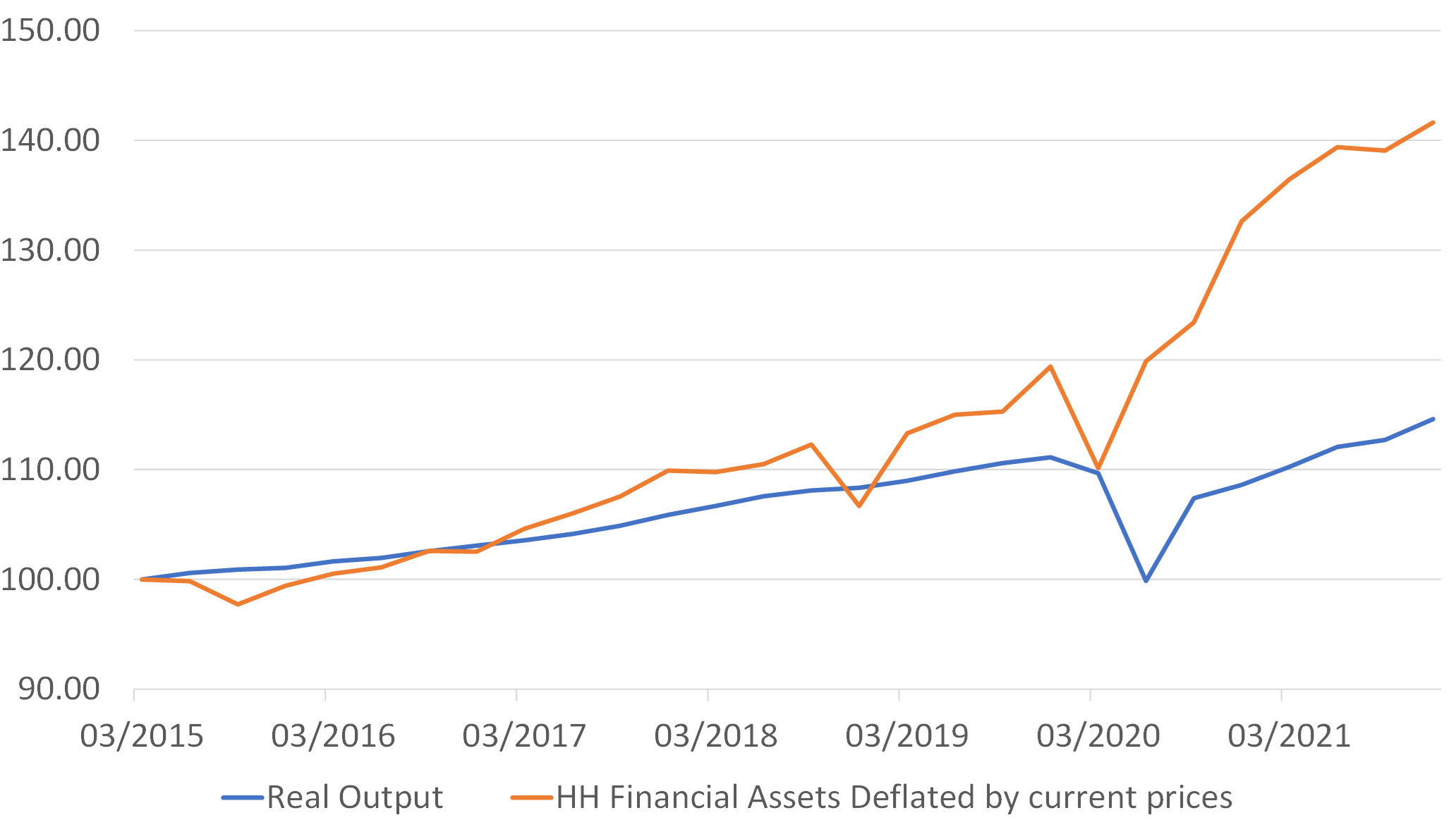 The problem with giving people (economies) money for nothing is that something that is conjured from “thin air” can have no value in terms of its ability to acquire real things. The author never tires of telling his kids that simply doubling the amount of money people have by giving them more money will not create more seats on aeroplanes, it will just likely double the price of those seats. Hence, the World is facing inflation today and will do so until the excess money has been absorbed. Only by making more planes and capacity that people want will create more real wealth for people…..

Like many of his generation, our youngest son was attracted to the notion of crypto currencies as a way to acquire monetary wealth and until recently he was forever showing us YouTube videos of young “on paper” billionaires driving exotic cars to make his case. However, the crypto currencies - which really are created from nothing - could only have a positive value if people wanted to hold them in greater quantities than they were being produced. Unfortunately, although there may only be a finite supply of Bitcoins, there was an infinite supply of Bitcoin substitutes and derivatives thereof….

In our view, private crypto currencies are (or were?) simply “fashionable tokens” rather like tulips, fine art, wine, classic cars, and numerous corporate Ponzi schemes that were perceived to be desirable by enough people to ensure that they became objects of speculation between consenting parties for a period of time. The advantage of cryptos in comparison to some of these other “fashion or fad assets” was that they were easily tradeable; their disadvantage is that if you end up stuck with them when the music stops there is no utility (and perhaps negative utility) in still owning them. For my own part, I may be stuck with a rather nice Lotus Mark VI race car now that the car market has turned, but it still looks nice and it is fun to drive on a sunny day …...

To return to the Bundesbank’s central point, unless someone reading these pages very badly wants an aluminium sportscar, the author is going to have to keep working and it will be interesting to see what happens to the US labour participation rate now that the crypto bubble has burst…..

In conclusion, it does seem to us that, now that inflation has arrived for essentially the first time since Dire Straits rather adeptly called the start of a new cycle, policymakers are going to have to decide between continuing to throwing yet more “limitless money” at the system (e.g. tax cuts to offset the “cost of living crisis” being the most transparent and obvious example, along with still hoping that never-ending asset price gains will bailout unfunded pension schemes), or having a long overdue re-assessment of what the process of saving actually means.

In reality, there is simply no getting away from the fact that saving implies forgoing consumption today so that you can have more later rather than now, but people have been lulled into the false sense of financial security by rising asset prices that seemed to promise the unlikely scenario of consuming both more today and more in the future. Higher savings rates and deleveraging will therefore likely be part of the “Great System Reset” that we are currently undergoing.

From the perspective of the financial markets, we would note that higher savings rates are usually associated either with generally higher real interest rates, or very low (i.e. very negative) real interest rates., since the savings rate is “U-shaped” with respect to real interest rates. This tells us that the World likely faces three possible paths at this juncture: Firstly, policymakers could attempt to keep nominal rates low and let inflation remain persistent (the late 1970s outcome). Under such a scenario, we can expect rapid earnings growth but low Price-to-Earnings Ratios, except in inflation hedges. Alternatively, policymakers could seek to raise interest rates by enough to control inflation and then leave them at elevated levels to suppress inflationary pressures. Equity markets will likely be driven by stock pickers / micro themes under this scenario. However, there is a third outcome under which over time inflation gives way to deflation and higher real interest rates despite persistently low nominal rates. This final scenario could plausibly unfold if the unwinding of the Post 1985 model triggers a painful de-leveraging cycle. This, of course, is what occurred within Japan’s highly leveraged economy over the course of the 1990s.

Given their high debt burdens and potential for higher interest rate costs, governments clearly have an incentive to engineer outcome one, but increasingly the political costs of the “Cost of Living Crisis” are forcing them away from this outcome (except perhaps in the EU / UK in which idiosyncratic political forces are at work). The Federal Reserve meanwhile looks to be intent on forcing the second of our possible outcomes, but we would note that any overzealous policy action (or even inaction later) could trigger the Japan outcome by accident.