All other countries
by Andrew Hunt, International Economist
02 February, 2022

The Federal Reserve may have been caught by surprise by the persistence of inflation in the USA over recent months but we suspect that many investors in the Emerging Markets are about to experience a similarly unpleasant surprise of their own. While there is always talk about the Emerging Markets, and in particular those in the Asian Region, having decoupled from the US in terms of their economic cycles, the fact remains that these countries – including China – continue to set their monetary policy targets with at least half an eye to their exchange rates against the US dollar.

This desire to limit currency volatility and to maintain what are often undervalued real exchange rates may have provided a short term benefit to their export prospects and to their current account balances in general, but it leaves their less transparent but arguably even more important international capital account balances beholden to US monetary conditions, and therefore to the Federal Reserve.

This is of course most obviously the case in Hong Kong, which operates an explicit exchange rate target, but elsewhere the majority of EM currencies remain linked to the US dollar and therefore their monetary systems effectively at the Federal Reserve’s mercy.

This is as true today as it was in 1994, when the Federal Reserve last embarked on what was then considered to a “surprise tightening”. During 1993, US growth had appeared fragile and inflation muted but unfortunately this proved to be a feature of the data rather than of reality. When the data was revised in December 1993 and January 1994, the Federal Reserve rather belatedly discovered just how strong and inflationary the economy had become, with the result it was obliged to embark on a surprise and quite aggressive tightening of its policy regime, a move that blindsided the markets. On that occasion, the drying up in financial sector liquidity and the sharp rise that occurred in US Treasury yields led to sharp declines – and volatility – in the Emerging Markets, a process that culminated in the Tequila Crisis at the end of 1994. Crucially, all pf this occurred at a time during which many of the economies had appeared to be booming on the back of strong global trade trends and sharp increases in their own domestic capital expenditure.

In 1993 created a boom rising yields a slump 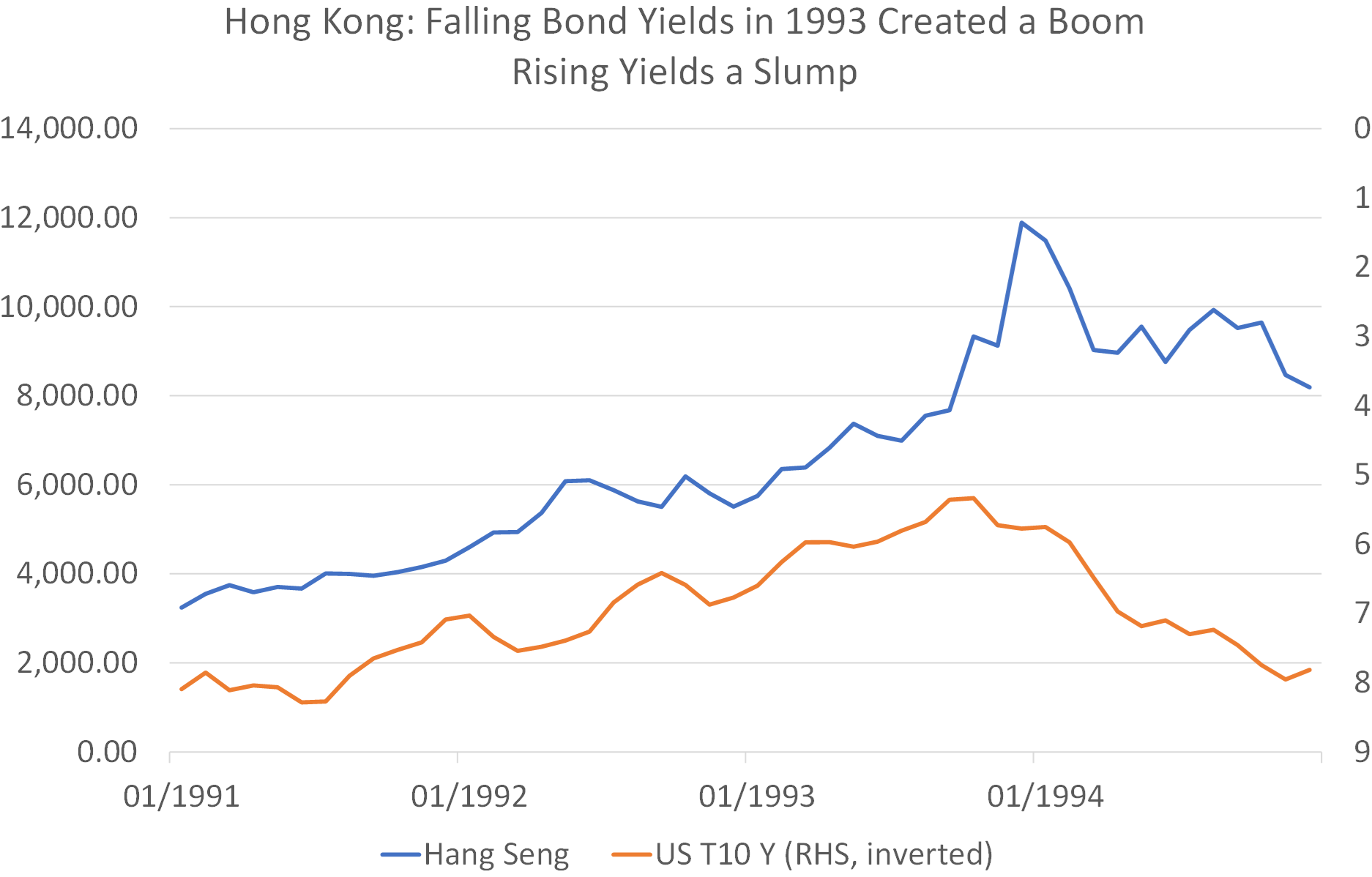 We would argue that the Asian economies tend to be particularly exposed to the vagaries of the US monetary cycle. When US monetary conditions are accommodative and US interest rates are low, dollar liquidity is drawn into the Asian markets, a process that tends not only to lift local asset prices but which also causes the countries to run what often become outsized balance of payments surpluses. These surpluses in turn oblige the local central banks to intervene in order to hold their currencies in check, a process that more often than not results in a second wave of liquidity creation as the central banks create domestic money in order to finance their intervention. To further enhance the process, these new funds are then used as ammunition by the regional commercial banks to create yet more credit and hence even more liquidity. This three-stage-process is why Asian asset prices often react so favourably to an easing of policy in the US, and in particular to a weaker US dollar.

However, this virtuous usually inflationary cycle for the EM can quickly become a deflationary cycle when the Fed tightens. As the US central bank withdraws liquidity and yields climb, capital is drawn back to the US. This itself creates selling pressure in the asset markets but, if the local central banks are obliged to intervene in order to support their own currencies, they will implicitly place upward pressure on their domestic yields and they may even withdraw liquidity. At this point, the Asian credit cycle will also turn down and deflationary forces are created – usually but not exclusively within the asset markets. Finally, as liquidity conditions tighten, economic growth slows and with it so do corporate earnings.

Of course, the EM central banks could choose to break this cycle by allowing greater currency flexibility but this is generally an ill-advised strategy when conditions are tightening – as most of Asia discovered during 1997. When dollar conditions are accommodative, it is quite normal to find that both banks and companies in the EM will seek to use what they perceive to be cheap dollar financing for projects both at home and abroad. When the dollar is weak this is clearly a highly advantageous strategy but, if borrowing costs in the dollar rise or the dollar itself appreciates, then the impact on debt service costs can be ruinous, as many banks and other borrowers found to their cost in 1994 – and again even more spectacularly during 1997.

At present, the majority of EM countries remain linked to the US dollar and their capital account balances – that can dwarf even the largest of trade surpluses - are therefore the mirror image of that of the US. Since the GFC, the flow of – predominantly debt market-related capital to the EM has been simply immense and if anything our chart probably understates the true situation. 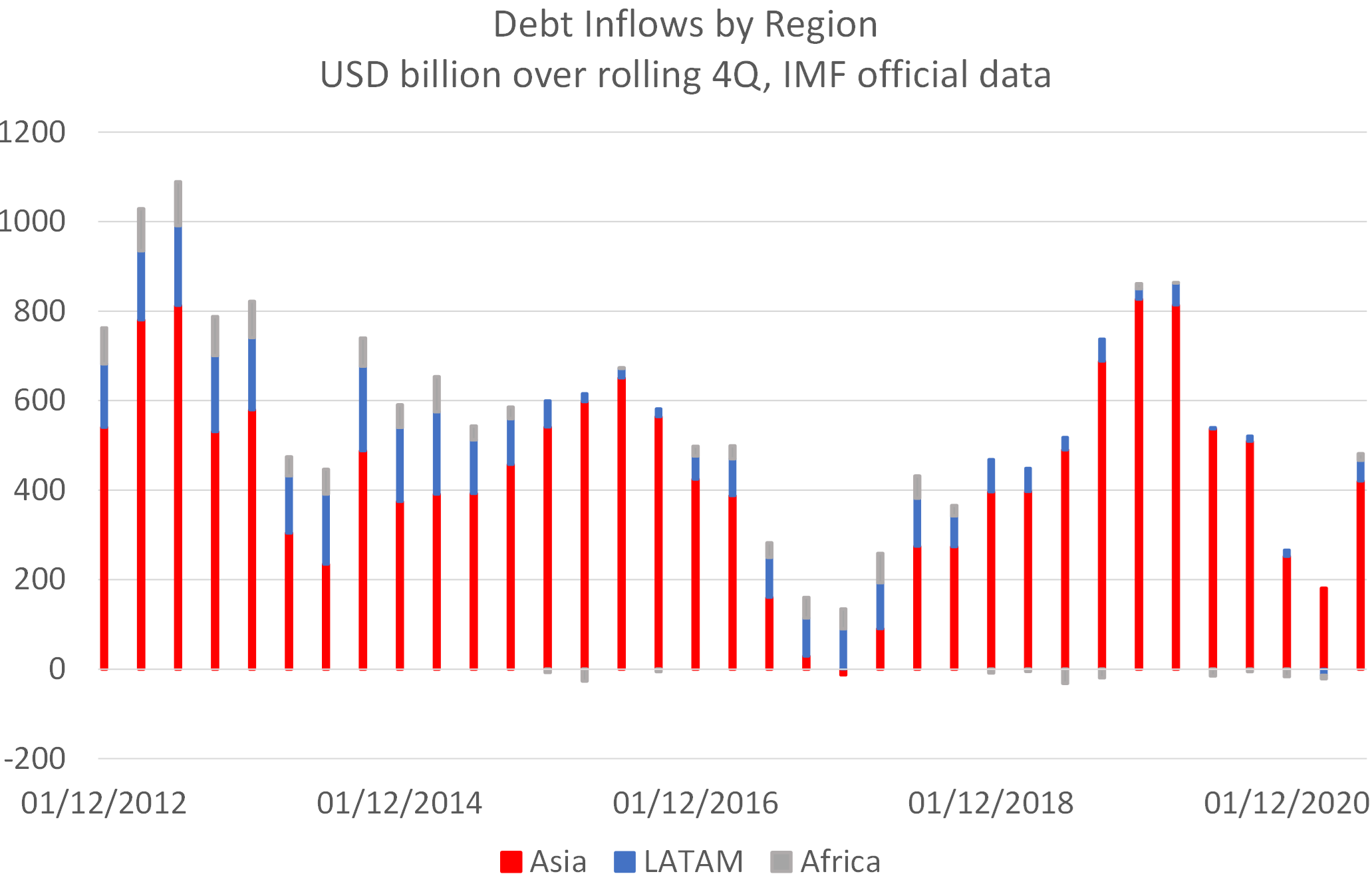 If there has been one clear message that has emanated from the Federal Reserve’s statements over recent weeks, it is that it foresees itself having to tighten by more than expected – US inflation has indeed proven persistent not transitory. Moreover, the Fed has intimated that it intends to conduct something of an experiment by not only raising rates to combat inflation but also by contracting liquidity in the financial sector at what could prove to be the fastest rate in modern history. It is not inconceivable that the US’s supply of base money could fall by 15% in nominal terms this year. 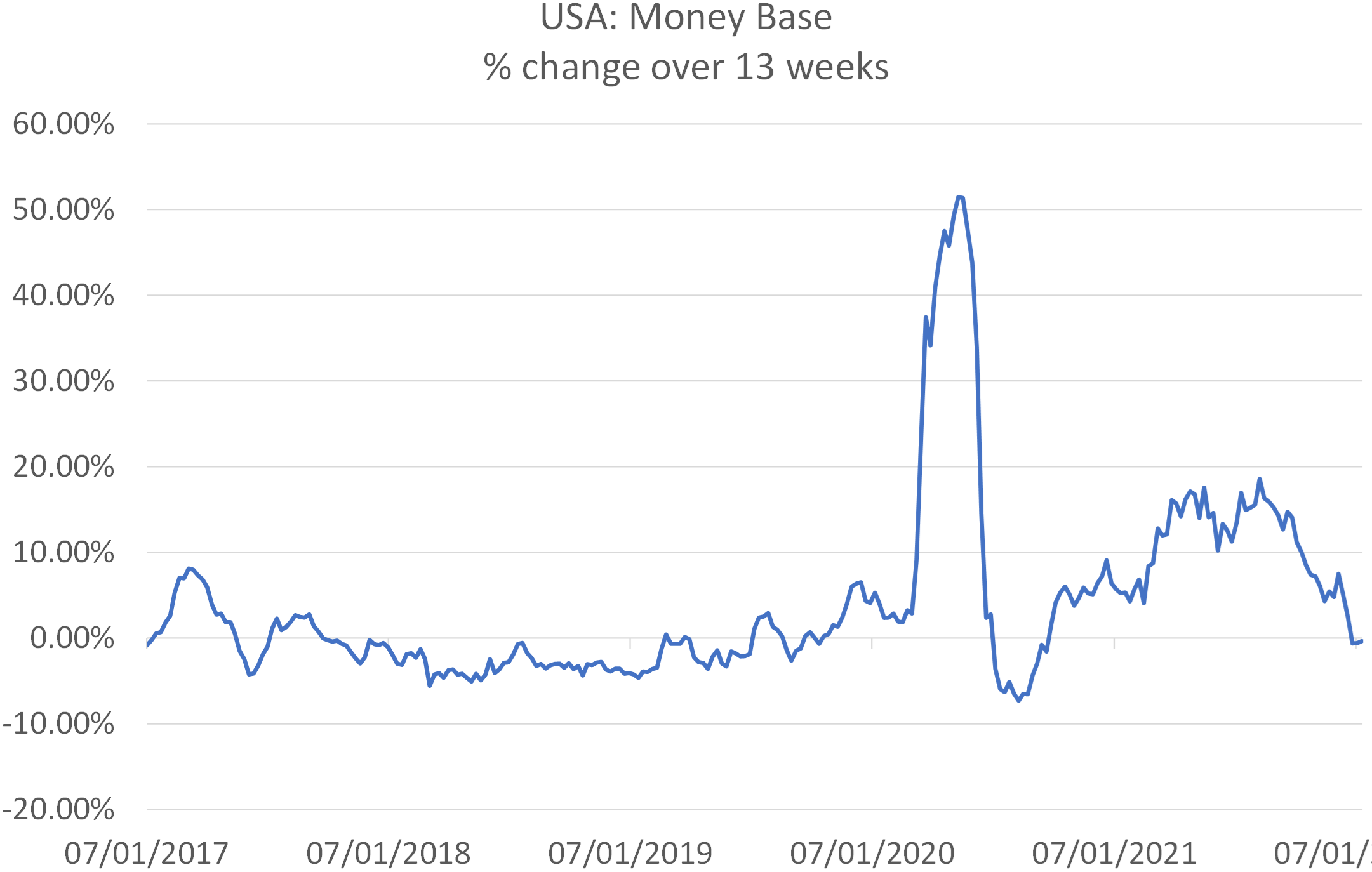 In fact, we fear that the FOMC may run the risk of overtightening in the near term, a prospect that has certainly not been lost on global financial markets. This situation has the potential to create an unpleasant monetary surprise in the EM, a surprise that usually raises effective borrowing costs and depresses nominal growth in the economies concerned. Traditionally, the EM tend to underperform when the US tightens and we see no reason for this behaviour to be broken in 2022.