A More Uncertain Future than the Hawks Realize

All other countries
by Andrew Hunt, International Economist
01 June, 2022

Since the Pandemic first unfolded, it has generally paid to invest and act according to what the Federal Reserve Chairman said was going to happen, rather than what did in fact happen. The obvious example being last year, when the Fed told markets not to worry about inflation even though the central bank clearly should have been worried about rising inflation rates…..

Times have however changed since then. The standout comment in Chairman Powell’s Post Monetary Policy press briefing last month came when he remarked that “who knows where the economy will be in a year’s time”. Repeatedly, the Chairman reiterated that we should not take the infamous dot charts as a forecast (so why do them?); that the Fed would have to react to the incoming data; and that this was a time of great uncertainty. It seems that the primary message that he wanted to convey was that the Fed would henceforth be reactive.

For markets, the fact that the Fed no longer knows what is going to happen should imply a higher risk premium. Yes, some form of Fed Put may still exist if any crisis is big enough to outweigh the Fed’s fear of inflation (more on this later) but we can no longer have faith that the Fed will be as predictable as it was in the past and this could undermine asset price valuations across the board, independently of what is happening to earnings and liquidity.

Another telling comment in the Chairman’s Q&A was that the Fed views the likely $500 billion of balance sheet contraction that it seems set to embark upon as likely to be “akin to a further 25 bp rate hike”. We have no idea how the Fed arrived at that maths and to be honest think it is a highly dubious statement, but it does tell us – yet again – that the Fed does not really think about quantities, despite the fact that it so blatantly over-eased in a quantity sense in 2020 and got caught out in both 2018 and 2019 by not thinking of quantities. Indeed, if you don’t think about quantities, you probably could expect the Fed Funds rate to rise to five percent or more in relatively short order.

In the real world, as the Fed shrinks its assets, so too must its liabilities contract. Since it is unlikely that the note issuance will contract meaningfully (i.e. physical dollar bills), the liability that will contract will be the Fed’s liabilities to the commercial banks, namely the banks’ reserves and the Fed’s RRP (Reverse Repo Facility) with the banks (both of which are equivalent to cash on the banks’ balance sheets). The banks will therefore have less cash available to use as a “settlement balance” for their lending activities, particularly (but not only) within the realm of market-based credit within the financial sector.

Therefore, the banks will either need to lend less to their clients, which implies a reduction in credit availability within the system that would be expected to have a profound effect on economic activity, or they will have to sell other assets to rebuild their cash reserves. If they follow the second route, this will imply that the banks will join the Fed in selling bonds – and there are signs that this process is already beginning.

When investors are required to buy these bonds, they will end up “writing a cheque” for perhaps $3-4 trillion, which of course implies that they will have >$3 trillion or so less money to spend on other things. Some of this money will come back to them when the Treasury spends money through the deficit, but we could still easily see people having 5% less money in nominal terms (of course very much less in real terms) as a result of this activity. Under this scenario, the much-hyped household sector’s savings pot that is supposed to support economic growth would be drastically undermined.

In practice, we are not going to attempt any “maths” as to how much these quantity effects will impact the economy, but we are willing to bet that they will be a multiple of the FRB’s presumed “25 bp impact”, which of course means that the Fed Funds may not go up by as much as the Fed seems to be predicting.

Returning to Mr Powell’s comments, we can also note that the Fed’s official forecast (which we sense that they themselves probably don’t believe) is for economic growth to run at one and a half times its trend rate in 2022 but for underlying inflationary pressures to ease! This could only occur if the economy has a negative output gap (i.e. spare capacity) at present which, to be honest, we very much doubt is the case but nevertheless the Fed seems to be clinging on to this hypothesis despite the evidence to the contrary. 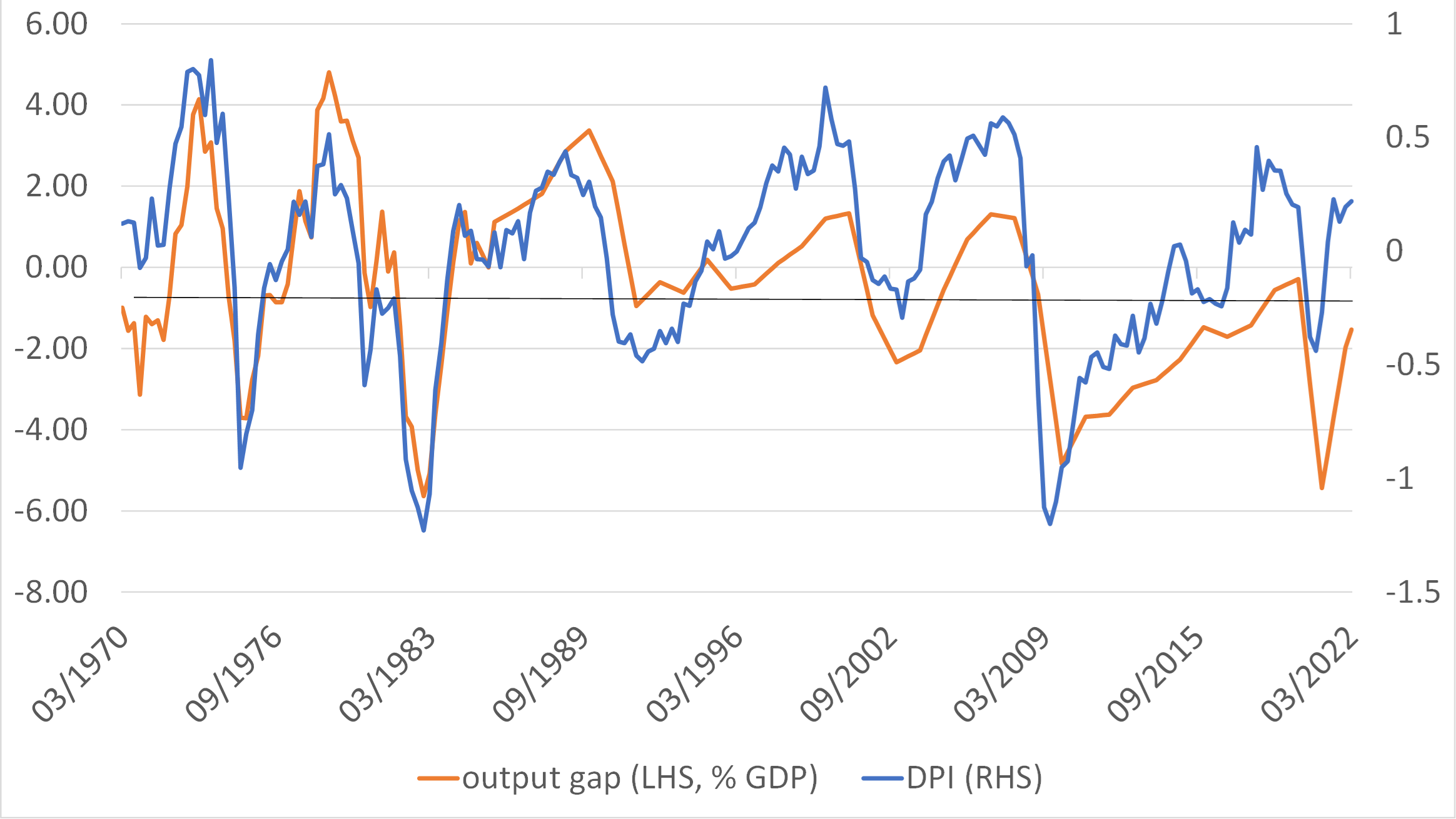 Our latest estimate of our (output gap alternative) demand pressure index shows the economy running at an above trend level of utilization (i.e. it implies a positive output gap) and, if the economy does grow by more than 2%, then the Demand Pressure Index (and inflation rates) will climb ever higher.

Interestingly, although the US economy contracted during the first quarter, the DPI was essentially flat. This tells us two things, namely that we will indeed need a recession to bring inflation down and, secondly, that the peak in domestically-generated inflation is likely to still be six to nine months away even if the recession has already begun. Most people will of course doubt that the latter is true, but we are beginning to wonder given some of the recent softness in the data.

Although central bankers like to talk about the low inflation era of the late 1990s nd 2000s, the truth of the matters is that the last 25 years have witnessed a great deal of inflation in the service, non-traded, and property sectors of the OECD economies (so much for price stability). One only has to think about the price of going out for dinner or renting property to confirm this and the inflation in these sectors was fuelled by rapid rates of debt growth, be it via corporate bonds to finance equity buybacks, loans to finance property speculation, or borrowings to finance investment in the notoriously cyclical hospitality sectors. Meanwhile, it was the goods markets that have witnessed low inflation / deflation since the mid-1990s, albeit at the cost of a sharp rise in indebtedness within the EM / PRC corporate sectors as they sought to maximize their scale rather than their profits.

If the quantity of credit is now to be restricted (deliberately or otherwise), then the highly indebted sectors in the West will likely feel the worst of the effects, and these are in general concentrated in the non-traded goods & domestic sectors. Therefore, if credit conditions tighten aggressively, deflation is possible in these sectors. Meanwhile, the tighter credit conditions in the PRC are already obliging companies to do less CAPEX and pay more attention to their margins, something that could well prove inflationary for goods prices.

It does therefore seem that the unprecedented gap between traded and non-traded goods prices is indeed set to narrow – and by implication the resulting headline inflation will be determined by the average of the behaviour of prices in the two sectors. As Mr Powell himself said, there are several ways that the next year or two could pan out. In the table below, we show the four possible scenarios – a return to Goldilocks; the current situation continues, the nirvana of a soft landing; or an evil version of Goldilocks. If we had to assign probabilities, they would be 10%; 40%; 10% and 40% respectively. 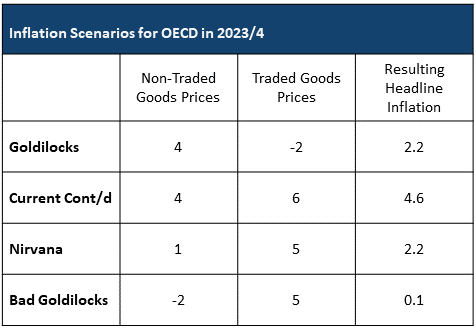 It is interesting to note that only in the current conditions-maintained scenario, in which both goods and service prices are rising and policy never really becomes tight, will inflation remain elevated. However, tighter monetary conditions in the West and EM could inadvertently tip us into “Bad Goldilocks”, in which inflation is low but non-traded goods prices are deflating and goods prices rising.

Today, such a scenario might seem entirely unthinkable, but we can assure you that during 1990 in Japan, everyone was worrying about inflation not deflation until they realized just how tight the BoJ had become in a quantity sense when it allowed a banking crisis (n.b. nominal interest rates were still seemingly low – and real rates were very low). In 1990’s Japan, everyone was one way (higher yields) on JGBs but the rally in JGBs that occurred once non-traded goods price inflation subsided and shifted towards deflation was immense.

At present, financial markets are assuming that inflation will remain high and that growth will slow – that stagflation is the most likely outcome. Some may whisper about the possibility of a recession, while others are hoping for the Nirvana outcome of a perfect soft landing. However, what no one seems to be willing to discuss is the possibility of the 1990s-2000s unwind – the Bad Goldilocks outcome. But, if the Federal Reserve lets monetary conditions tighten too far, then real interest rates could still rise in the heavily indebted domestic sectors without nominal rates having to rise too far. In such a world, there will be a time to look to bonds again in 2023 (we think that the recent rally in bonds is due to short term supply and demand factors in the debt markets that will likely reverse over the third quarter).