Anticipation that change to Japan’s political leadership will support the economy, markets

All other countries
Download as PDF
by Naoki Kamiyama, Chief Strategist
09 September, 2021

Anticipation that change to Japan’s political leadership will support the economy, markets

PM Suga opts to step down, throws the ruling party’s leadership race wide open
The announcement from Japanese Prime Minister Yoshihide Suga early on 3 September that he was stepping down after a year in office sent shockwaves across the country. Suga’s decision has thrown the ruling Liberal Democratic Party’s (LDP) leadership race scheduled for 29 September wide open, with a number of candidates now jostling to replace Suga as party leader and become the next prime minister.

The Nikkei responds by rallying to five-month highs
Although it is still unclear who will succeed Suga, the Japanese equity market reacted swiftly to the impending change in the country’s political leadership. The Nikkei Stock Average rallied to a five-month high this week, reflecting market hopes that the next administration will plot a new course for Japan’s pandemic response—perceived to have stalled under Suga—and steer the economy towards normalisation. After new COVID-19 cases in Japan surged to record highs under Suga’s tenure, strengthening Japan’s response to the outbreak is likely to become the main campaign issue for the LDP leadership candidates.

Regardless of who replaces Suga, the new prime minister will have to deliver results quickly to retain public support. The new administration will likely employ measures against the pandemic that the Suga administration had been hesitant to enact, such as imposing stricter controls on the movement of people and giving local governments greater authority to acquire necessary medical personnel. Hope that the new administration will launch fresh fiscal stimulus steps is another key factor that fuelled the rally by Japanese stocks. The market had already been expecting stimulus in the form of “GoTo” travel subsidies. Any additional measures, such as the provision of cash handouts to pandemic-hit households, would come as an unexpected bonus.

Chance for Japan to catch up with the US
We see the upcoming change in political leadership as an opportunity for Japanese stocks to catch up with their US counterparts after falling behind over the past few months. Japanese stocks have lagged as the US has moved quicker to normalise its economy through an extensive vaccination rollout. Although Japan was initially much slower in its vaccine rollout than the US, its vaccination rate has recently spiked and the country now aims to finish inoculating all who are willing by October or November. The surge in vaccinations, coupled with steps the next administration could take to contain the pandemic, may enable Japanese stocks and the economy to catch up to their US peers earlier than we expected.

General election and foreign investors
Japan’s general election, which needs to be held by the end of November, immediately follows the LDP leadership race. Had Suga opted to remain in office, the LDP and its junior coalition partner Komeito were expected to lose a number of seats. But with Suga due to step down, the ruling coalition could avoid such an outcome and retain a relatively comfortable majority in parliament as opposition parties have not experienced a significant increase in public support.

Foreign investors have often been sensitive to changes in Japan’s macroeconomic environment. As such, a decisive general election win by the LDP and Komeito could prompt them to actively take positions not only in Japan’s cash equity market but also in futures. The new premier’s policies in terms of support to the economy will have to be at least on par with those of Suga, which is why positive expectations towards Japanese equities are in anticipation of the LDP and Komeito gaining the parliamentary majority in the general election which will allow them to smoothly enact their policies. However, even if the coalition decisively wins the general election, maintaining effective leadership is a different matter. Unexpected challenges to the new administration’s leadership and administrative capabilities are potential risk factors, in our view.

Market: Japanese stocks rise in August on strength of US peers

The Japanese equity market ended August higher with the TOPIX (w/dividends) up 3.17% on-month and the Nikkei 225 (w/dividends) up 3.01%. The market was initially weighed down by growing concerns over a slow economic recovery due to the Japanese government’s decision to extend the timeline and the areas covered under the state of emergency amid a persistent rise in Covid-19 cases in Japan. However, the market eventually began to move higher on the back of rising US stocks, which benefitted from increasing optimism for an economic recovery in light of the Senate’s passage of the infrastructure bill. The Federal Reserve chair's dovish speech about tightening policy also helped to ease expectations for faster rate hikes, although he indicated his view that it would be appropriate to begin tapering before the end of the year. Of the 33 Tokyo Stock Exchange sectors, 25 sectors rose, with Marine Transportation, Iron & Steel, and Precision Instruments posting the strongest gains. In contrast, 8 sectors declined, including Oil & Coal Products, Pulp & Paper and Nonferrous Metals. 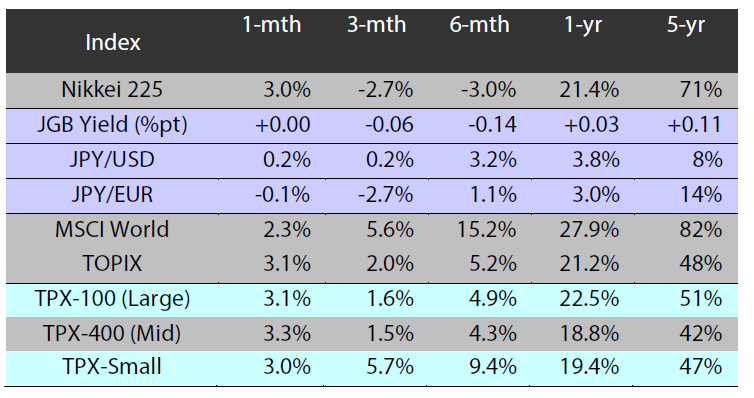 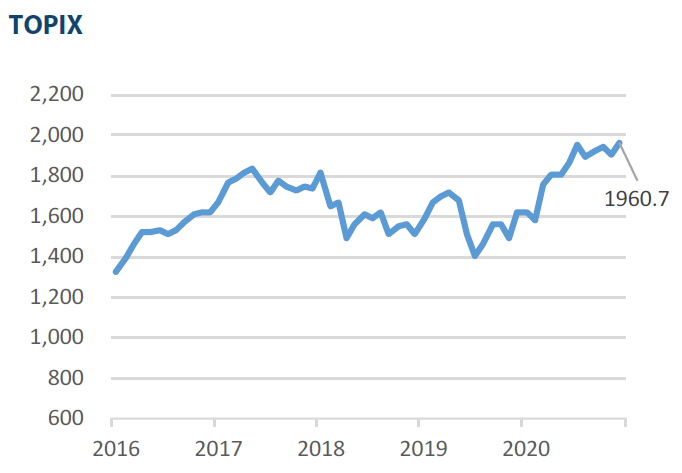 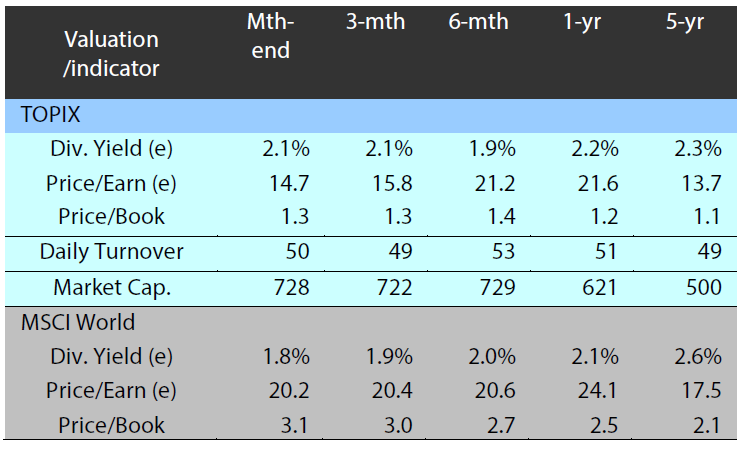 (e) stands for consensus estimates by Bloomberg. Turnover and market cap in JPY trillion. Source: Bloomberg, as at 31 August 2021 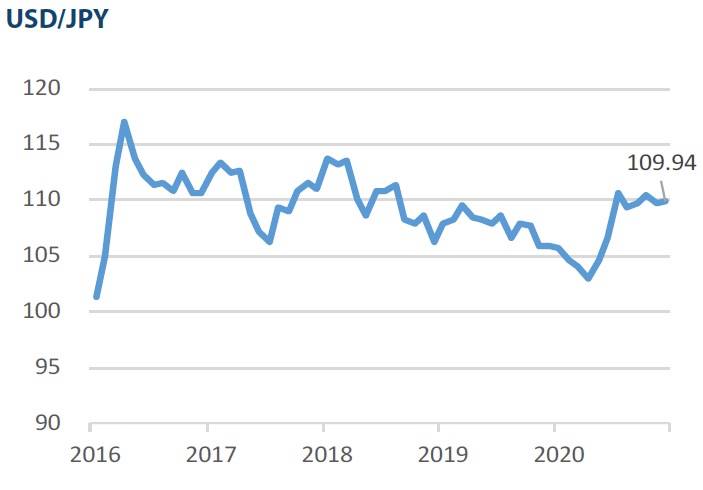