Looking beyond the Nikkei's recovery from "Corona shock" lows

All other countries
Download as PDF
by Naoki Kamiyama, Chief Strategist
07 October, 2020

Yoshihide Suga became Japan’s 99th prime minister in September, replacing Shinzo Abe, who resigned for health reasons after becoming the country’s longest-serving premier. Suga is widely expected to maintain his predecessor’s fiscal and monetary policies known as “Abenomics”; at the same time, Abe’s former right-hand man is also poised to take economic initiatives that are distinctively his own.

Of the initiatives that Suga intends to undertake, reducing mobile phone fees and consolidating Japan’s struggling regional banks are the two with strongest market implications, in our view. These initiatives differ from Abenomics as they are focused more on the micro aspect of the economy rather than the macro. Reducing Japan’s mobile phone fees, considered too high relative to those in other countries, and reforming the regional banking sector will not result in new innovations nor boost the economy in the short term. They are, however, positive for the economy in the long term as major inefficiencies will be removed.

Of particular interest to the markets and investors is whether Suga, currently an interim leader serving out his predecessor’s remaining term which runs through September 2021, can consolidate his standing and establish a stable, long-term administration. Many market participants believe that Suga will call a snap election before the year-end in a bid to win a full-time position as the ruling party president—and therefore the prime minister—while his support ratings are still high and the opposition remains in disarray. We note, however, that the situation remains fluid and that Suga may wait until next year to call an election. Either way, the markets will view Suga’s election win positively, especially if it’s a victory by an overwhelming majority.

Warren Buffett’s Berkshire Hathaway caused a ripple through the markets recently when it revealed that it had invested in five of Japan’s largest trading companies, particularly as the billionaire investor had previously paid little attention to the world’s third largest economy.

Foreign investors, however, may not immediately follow Buffett’s lead and begin investing in Japan en masse. Berkshire Hathaway is not only an investment firm but a conglomerate engaged in many business segments including the energy industry. Therefore the decision to invest in the trading companies, which are themselves deeply engaged in the energy industry, may also have been motivated by an attempt to establish business links with particular merit to Berkshire Hathaway.

Still, from the perspective of the Japanese equity market, there are positive aspects to Berkshire Hathaway’s new-found focus on Japan. Such significant moves by the “Oracle of Omaha” are accompanied by extensive media coverage. This raises the profile and recognition of the Japanese equity market, in turn providing an opportunity for foreign investors to take note and discover the array of undervalued stocks available to them.

The Japanese equity market rose in September, with the TOPIX (w/dividends) rising 1.30% on-month and the Nikkei 225 (w/dividends) climbing 0.80%. This month, Japanese stocks saw some periods of decline amid growing uncertainty in the markets as the COVID-19 crisis worsened in Europe and debate continued in the US Congress over additional stimulus measures. However, the market was otherwise supported by strong US economic indicators and improved investor sentiment as it became clear that Yoshihide Suga would win the Liberal Democratic Party’s leadership race and become the next prime minister of Japan, boosting confidence that the government’s current economic policies would be maintained. In addition, it was reported that Tokyo residents would soon become eligible to use the government’s “Go To Travel” campaign to stimulate domestic travel demand, which spurred expectations for a revival of economic activity. As a result, the market finished higher on-month. Of the 33 Tokyo Stock Exchange sectors, 16 sectors rose, including Marine Transportation, Precision Instruments, and Services. In contrast, 17 sectors declined, including Mining, Oil & Coal Products, and Air Transportation. 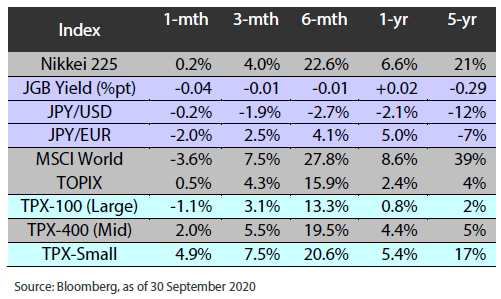 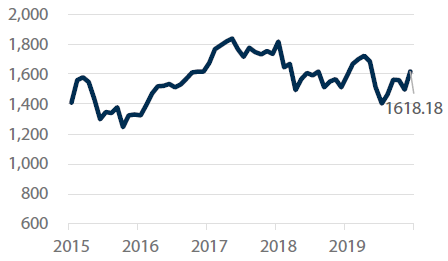 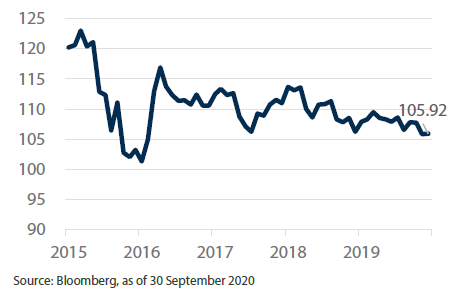