All other countries
by Andrew Hunt, International Economist
01 October, 2021

During the late 1980s, at the height of the Bubble Economy, and at a time during which seemingly everyone wanted to emulate the Japanese economic model, we were lucky enough to have high level access to the Bank of Japan. From late 1989 onwards, and particularly once Governor Mieno took office, there was a great deal of discussion within the central bank not just about the outlook for inflation (which was clearly deteriorating), but also just what the Bubble was doing to Japan’s society.

In particular, Mieno-San raged against rising wealth inequality and deteriorating housing affordability. The Bank was concerned that the Bubble was inconsistent with Japan’s traditional social structure. Consequently, when Mieno orchestrated a tightening, he was not only fighting inflation but attempting to exorcise the demons of excess and speculation.

We have been struck over recent weeks by just how similar President Xi’s recent comments have become to those of Governor Mieno a generation ago. President Xi does not want to see levels of housing speculation that leads to ordinary workers being priced out of the market, and apparently he also does not wish to see scarce resources “wasted” in presumed unproductive areas. We presume that this is part political calculation and also born out of economic necessity; with the working age population set to decline or at least grow more slowly, the only way that China will be able to continue its desired rapid growth trajectory will be if it finds a way to boost productivity and value added within the economy.

The notions of greater equality and faster productivity growth are of course worthy causes and investors should applaud them. However, such overt “planning” and social agenda cannot help but draw comparisons with Mieno’s ill-fated crusade, or even that of Governor Strong at the Federal Reserve in the late 1920s. As Mr Powell is discovering, central bankers should not meddle outside of their monetary remit and when they do the results have rarely been positive.

Policymakers have preferences about the type of societies that they wish to create and probably have some relevance to the recent shift in the direction and tone of China’s economic policymaking, but we should also acknowledge that much of the rhetoric, and in particular that around the topic of deleveraging has in fact been around for several years – at least since 2017 and China has experienced two major credit booms since then... This leads us to wonder why now? 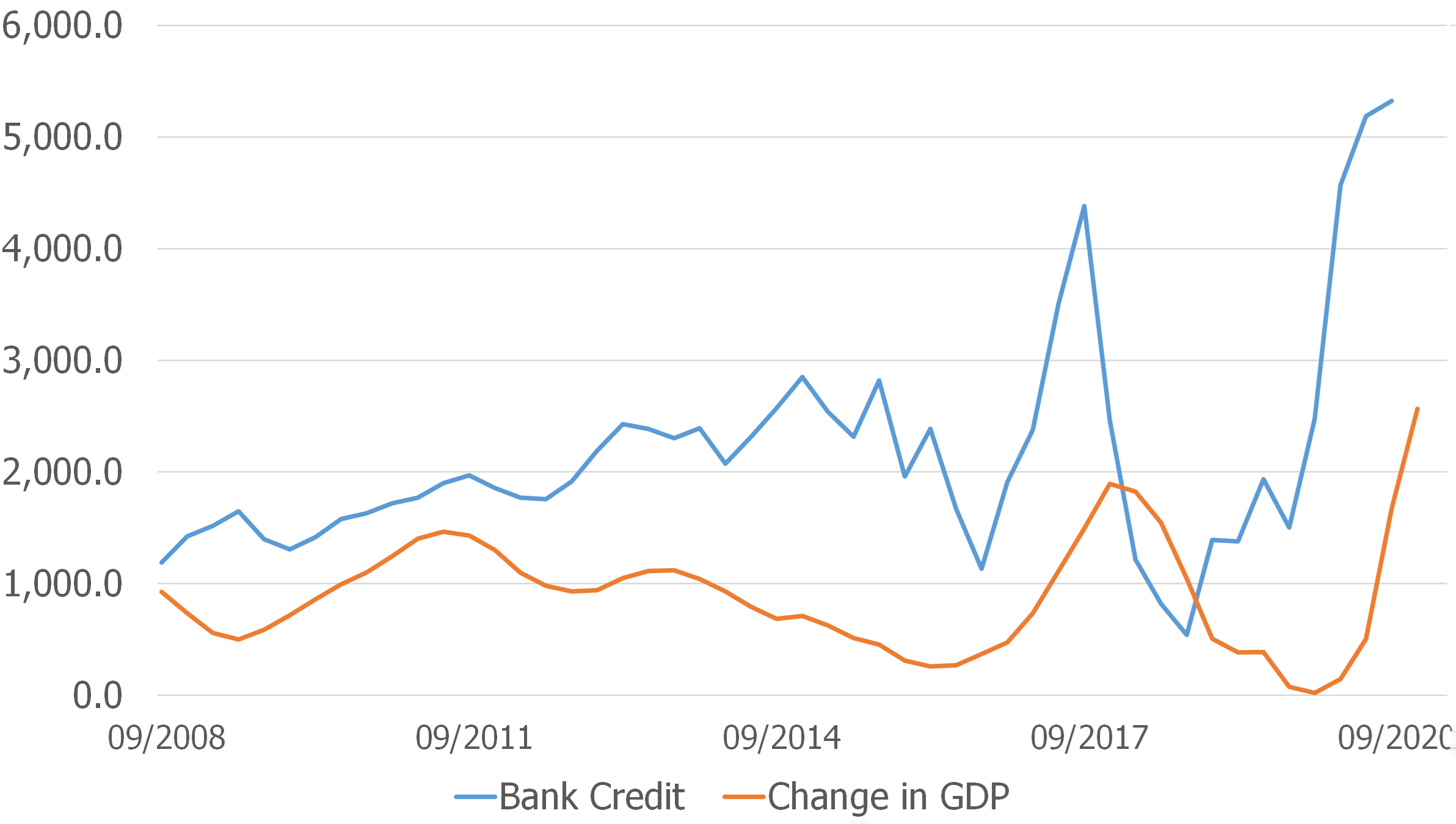 China’s economic model is inherently credit intensive and dependent. We have calculated that, on average since 1990, China’s corporate and local government sectors have together borrowed the equivalent of 20% of the country’s annual GDP each year in order to fund their pursuit of scale, of employment growth, and output maximization. China’s economic model is not a cash flow or profit maximizing one; it is focussed on quantities and as a result its “producers” run large current financial deficits.

One problem inherent in this is that GDP is expanding by significantly less than the volume of credit, with the result that the country’s debt ratio is now rising exponentially. If current GDP and credit trends were to be sustained for another 20 years, then China’s debt to GDP ratio would rise to a monstrous 1000%.

A high debt ratio is not a problem per se, providing that the banks and other lenders can finance their lending and this is China’s Achilles Heel. We estimate that China’s savers already have almost 40% of all of the bank deposits that exist within the global economy and since 2015 they have shown clear signs of wanting to diversify into other vehicles. This attempted diversification has left the banks “short” of deposits and therefore increasingly having to rely on expensive non deposit financing. They are also facing something of a bidding war for the available deposits. As result, the banks’ cost of funding has become more expensive and it may even be rising in an effective sense.

Meanwhile, on the other side of the banks’ balance sheets we find that so much credit has been created that the borrowers are now struggling to pay all of the interest that is owed. The rising debt ratio and the impact of COVID-19 have led to a situation in which interest expense now exceeds nominal GDP growth by a considerable margin. This is the very position that many countries in Latin America found themselves in during the late 1970s and early 1980s.

China’s solution to this problem – so far at least – has been to fall back on its own model from the mid-1990s (a difficult period for China) and to allow borrowers – such as Evergrande – to routinely “capitalize” their interest expense by simply adding it to outstanding loan. It seems likely that the banks then book this interest as having been received and therefore theoretically constructive for their income and even reported capital. Also, this capitalization of interest prevents the original loan from being classed as “impaired”. 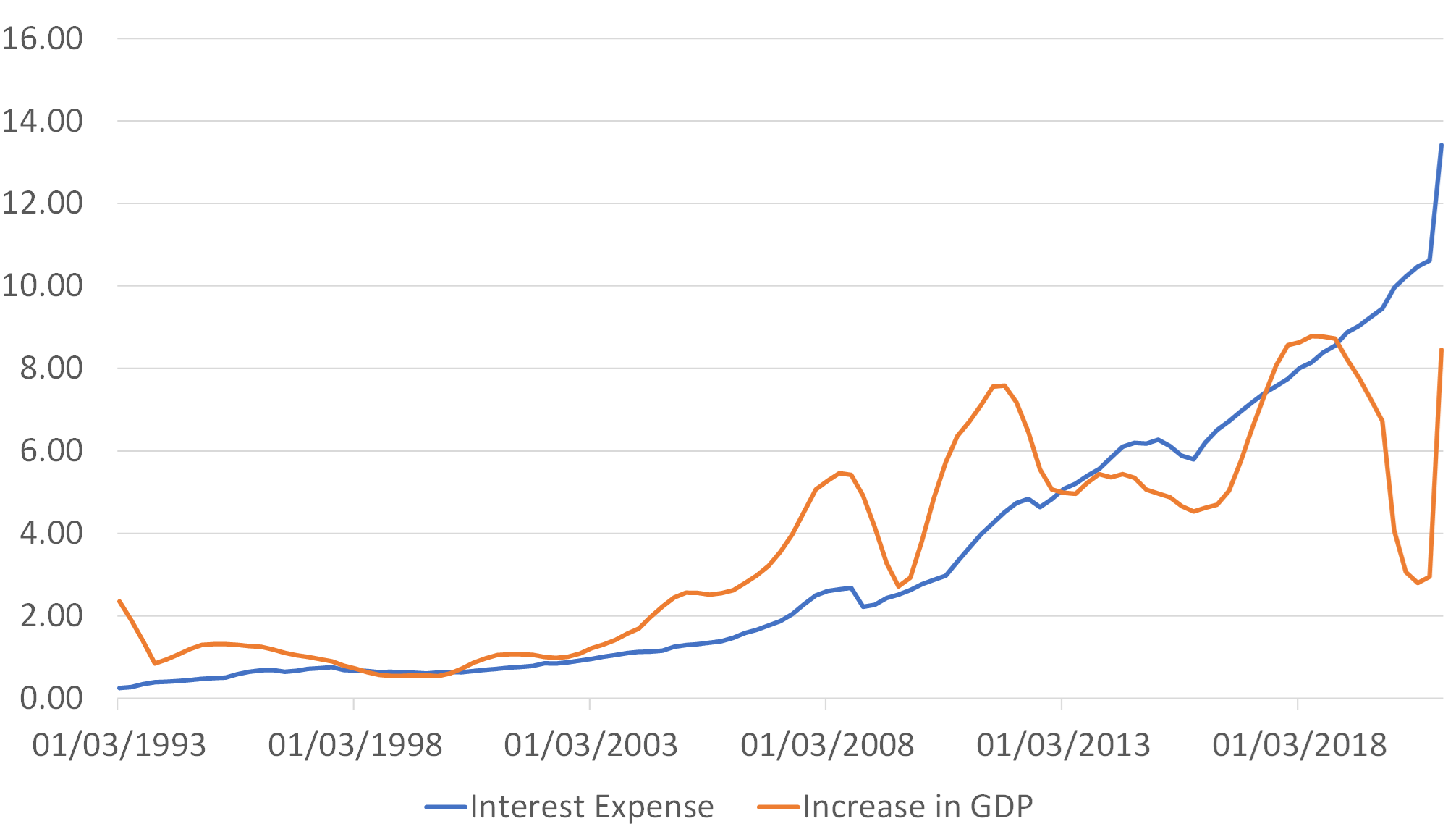 The flaw in the scheme is of course that the banks are not actually receiving income but they are having to pay up for funding. On paper their position may appear sound but in practice we believe that China’s banks are becoming income and capital constrained in much the same way as the Japanese banks were in the mid-1990s. Once this occurred in Japan, the banks could no longer provide sufficient credit to keep the economy expanding along the lines of its old model and Japan’s long slump began.

In fact, we are convinced that today China’s banks can probably only fund around half as much new credit as they could previously. In short, they cannot fund the borrowing needs of the entire corporate and Local Government Sectors and by definition China has become credit rationed.

We believe that this is why talk of deleveraging has suddenly become de riguer and why President Xi may have felt obliged to begin directing the limited amount of credit that is available to those sectors that he favours.

Clearly, one sector that he does not favour is the real estate and construction sector. This is being starved of credit and it is this that has brought Evergrande into the headlines. However, this is much more than being a story about one company that borrowed too much; China’s construction sector is a much larger share of the aggregate economy than was Japan’s in 1989, Hong Kong’s in the 1990s or the USA in 2005. If China’s property sector goes into a recession, aggregate growth in the economy will slow significantly.

Construction as % GDP at cyclical highs

Moreover, property holdings make up the largest proportion of household wealth in China and house price to wage earnings ratios in the major cities are at eye-watering levels that are more than a little reminiscent of Tokyo in the late 1980s. With property prices now falling in these centres, the chances of a balance sheet recession are clearly rising.

In summary, we believe that China’s economy has begun to decelerate sharply and that it has switched from being a major tailwind to global growth to a significant headwind. Moreover, as Japan found a generation ago, once the health of the banking system has been compromised in a credit-dependent economy, it can prove very hard to restart growth.

For example, simply cutting rates will just make the banks’ predicament worse, while Beijing lacks the necessary policy apparatus to mount a major centralized easing of fiscal policy. China’s slowdown could easily become protracted even when rates do finally decline.

In Japan’s case, the drying up of credit supply and the balance sheet recession resulted in a sharp rise in the national savings rate and we suspect that the same will likely occur in China next year. This rising savings rate will give rise to an ever larger current account surplus and, given China’s strict capital controls (which contrary to the wishes of some in Wall Street are unlikely to be relaxed anytime soon – China’s banks cannot afford to lose deposits to foreign fund managers!), this rising surplus could well give rise to a powerful rally in the RMB next year, an event that will of course be inflationary for China’s customers overseas.

China’s slowdown will be a negative for global growth but, if the nature of its slowdown causes the RMB to appreciate next year (most likely after a feint to weakness this year), China’s slowdown may also be inflationary for the Rest of the World. Indeed, China’s problems may yet prove stagflationary for the West and long lasting for its domestic economy; only if Beijing can walk a very narrow path between cutting rates to help the economy and cutting rates so much that it hurts the banks with a replay of Japan’s fate be avoided.