Are Central Banks Tightening into a Slowdown?

All other countries
by Andrew Hunt, International Economist
31 August, 2021

There has been a marked inflation of money balances in the USA and of course elsewhere within the global economy over the last 18 months that has led to a generalized inflation of household balance sheets – nominal expenditure, financial asset prices, and property prices have each inflated – in many cases proportionately.

Indeed, we have had no hesitation in referring to the last 18 months as being the first global monetary boom (as opposed to a credit boom) that we have witnessed in almost 20 years. The whole process has felt quaintly nostalgic for those of us that were working in the late 1980s Money and Asset Price booms.

Admittedly, the latest monetary boom did falter very briefly during the latter part of 2021Q1, but the data has in general been strong since then and it was particularly strong during the early part of the second quarter and again more recently Certainly, there is no shortage of liquidity within the global system at present and perhaps the biggest surprise for us at this time is that equity markets have perhaps not been stronger, and the dollar weaker, given the current monetary stimulus.

Asset prices have stumbled higher and the US underlying balance of payments does indeed seem weak (implying that the US is providing a liquidity boost to the Rest of the World), but it seems that the marginal power of liquidity may have started to wane as investors have become exhausted / fearful / concerned that we are no longer living in the real world when it comes to valuations etc. 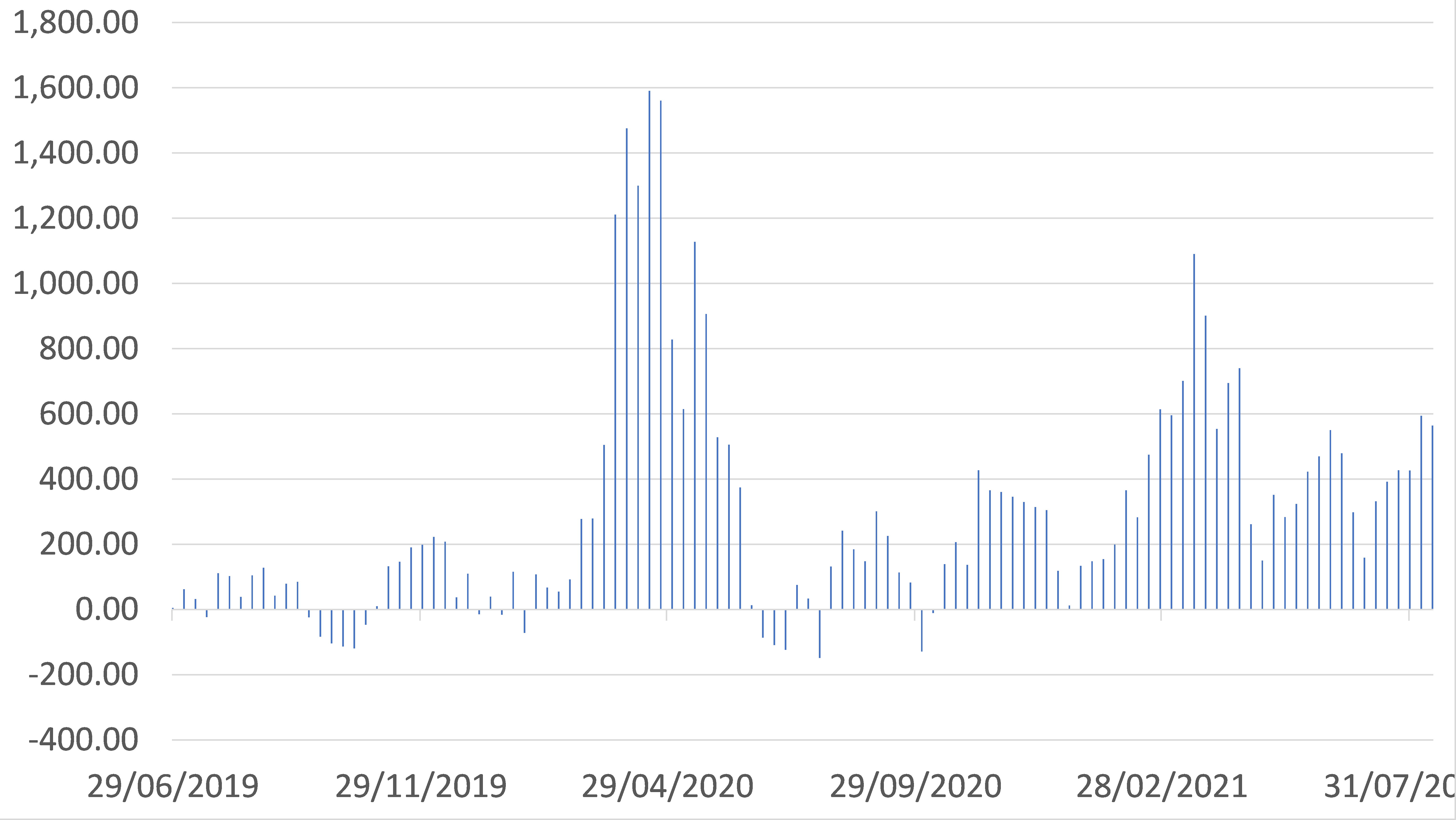 Aside from its sheer size, one other unprecedented feature of the current boom in US monetary growth is that the money creation process has revolved entirely around the public sector. In practice all of the monetary expansion over recent months has been due either to the Federal Reserve’s Quantitative Easing, the US Treasury’s implied monetization of the budget deficit via the drawdown in its own cash balances (Washington is at present being obliged by the Debt Ceiling rules to fund its ongoing deficits not by issuing bonds but instead by drawing on its accumulated cash reserves – i.e. its savings that are known as the “TGA”), or the commercial banks’ own forays into the Treasury bond markets. Conversely, private sector bank credit growth – and bank risk asset growth in general is essentially zero at present. 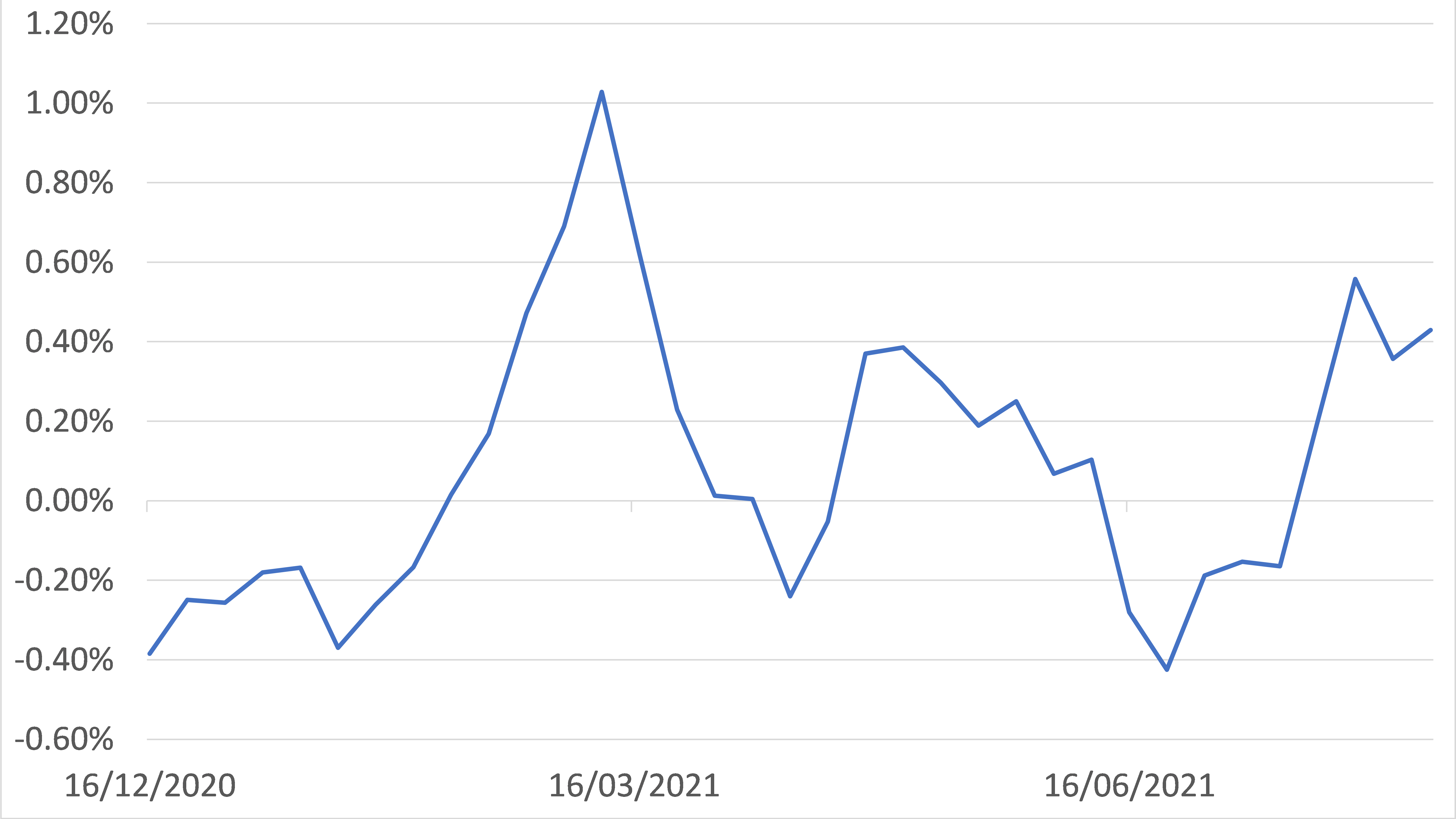 The reasons for the weak growth in private credit are varied. Larger real world companies have little need to borrow from the banks given the strength in the corporate bond markets, although it must be noted that the latter is itself a derivative of the general strength in bonds that has been caused by the Fed’s QE and the Treasury’s relative lack of bond issuance this year. Smaller companies are however likely to be credit constrained by a “broken banking system”.

Quite simply, the excessive levels of QE have so bloated the banks’ balance sheets that the banks now face Capital Adequacy and Liquidity Ratio constraints at a time during which they are not really being ‘paid’ to take credit risk because of the low absolute level of yields. In the household sector, credit demand is probably quite weak in aggregate given the amount of fiscal largesse over recent quarters.

The US (and much of the rest of the world with it...) is therefore experiencing one of its most aggressive monetary booms simply because the fiscal and monetary authorities have embarked on an enormous debt monetization binge that has dwarfed even that conducted by the BoJ six years ago.

However, and despite not only the weakness in private sector credit trends but also the fact that we may have passed the near term top in goods price inflation rates (China’s economy is slowing sharply and thereby leading to a drop in demand pressure within the global trade arena), the Federal Reserve has signalled that it will nonetheless move towards some form of tapering over the coming months, albeit very gently. By definition, this will lower the amount of money creation through this conduit.

Meanwhile, Washington may or may not be moving to some form of budget / debt ceiling agreement but in any case the Treasury General Account (i.e. the government’s cash reserves) is declining rapidly and given its current burn rate it will be exhausted by the end of the quarter unless debt issuance increases and / or the government begins shutting down.

This implies that within a few weeks the monetary stimulus that is implicit within the drawdown of the TGA will come to an end and could even reverse if the authorities ultimately decide to rebuild the TGA. It should not be underestimated just how important the recent drawdown in the TGA has been to not only the recent inflation in the monetary base but also the wider broad money supply and any change in direction in the TGA would have severe implications for realized rates of liquidity growth, particularly if this were to correspond with a Fed “tapering”.

USA: Counterparts to growth in money base 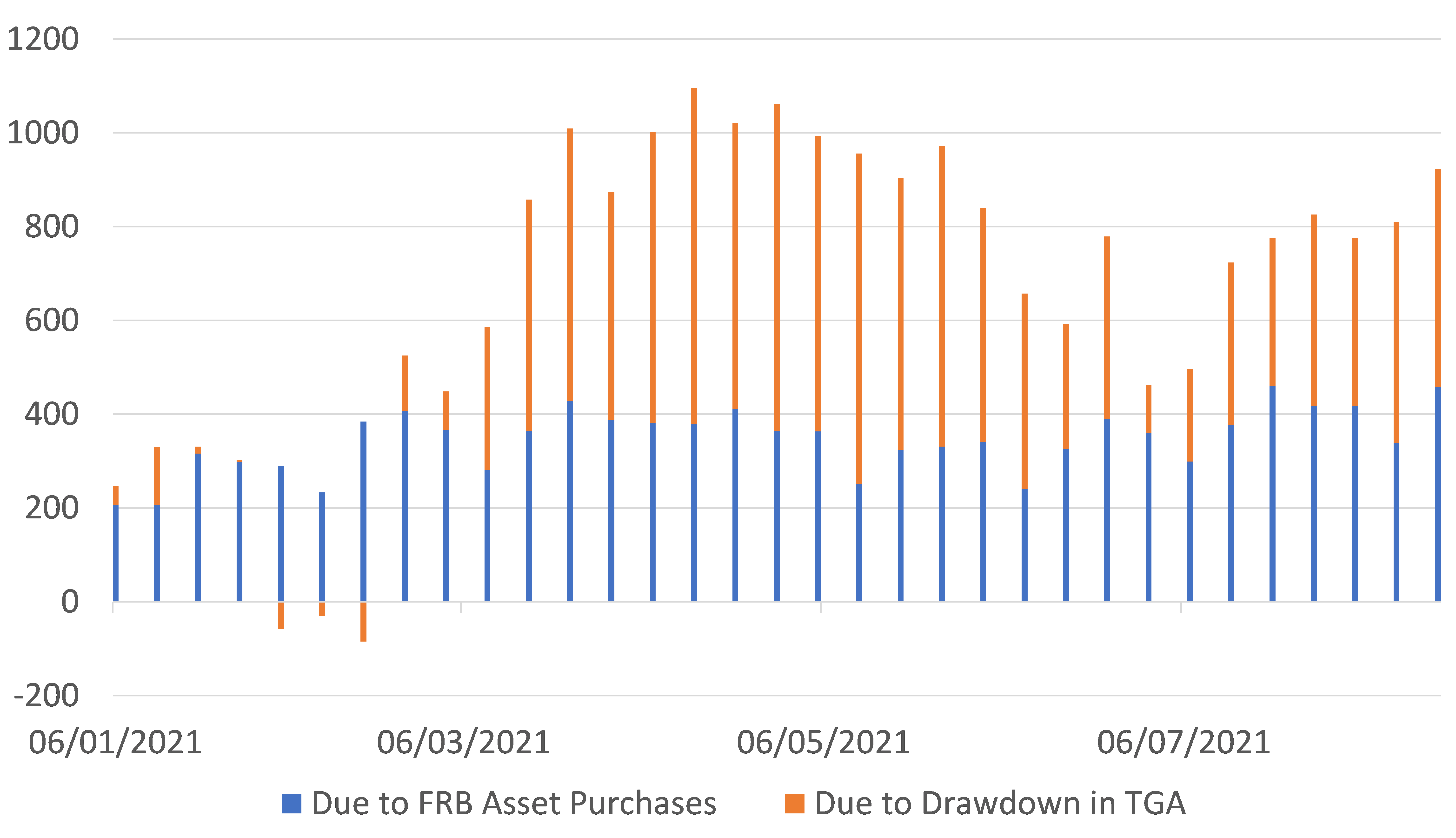 As 2018 revealed (and even in the mistakes of 2019), the Federal Reserve - like most of its peers - is firmly wedded to price targets; the price of equities and the yield on bonds being its apparent favourites. Despite all the near constant talk of QE over the last decade, the FRB rarely talks about quantities and increasingly does not even seek to measure them. This is the result of theoretical dogma in parts of the system but this failure to monitor quantities led to the Fed being (much) too tight in an effective sense during 2018 and to financial markets falling by more than it was expecting – 2018’s Quantitative Tightening plus rebuilding of the TGA that year resulted in an aggressive draining of liquidity and thereby caused a (global) economic slowdown and increase in financial stress.

There is therefore a chance that history will repeat itself in October / November this year if the Fed’s tapering were to collide with the end of the TGA drawdown. If this were to occur, we could expect (modest) upward pressure on yields and the USD just at the moment that the global slowdown in real economic activity was becoming clearer. In short, we could begin 2021Q4 with the central banks tightening into a slowdown and we fear that this will create a challenge for what already seem to be some nervous risk markets.