All other countries
Download as PDF
by John Vail, Chief Global Strategist
01 June, 2022

The just-released 1Q CY22 data on aggregate corporate profits in Japan was positive, with the overall corporate recurring pre-tax profit margin hitting a record high on a four quarter average. Both the non-financial service and manufacturing sectors contributed, with the latter surging to another record high. Note that the strong results occurred despite quite weak GDP, further proving the long-held theme of this report that profit margins remain on a structural uptrend despite sluggish domestic GDP growth, as shown in the charts below. Increased pricing power, coupled with improving corporate technological prowess and efficiency, should be credited for this, but improving global economic growth certainly was also a major factor.

(for all non-financial companies, not just listed ones) 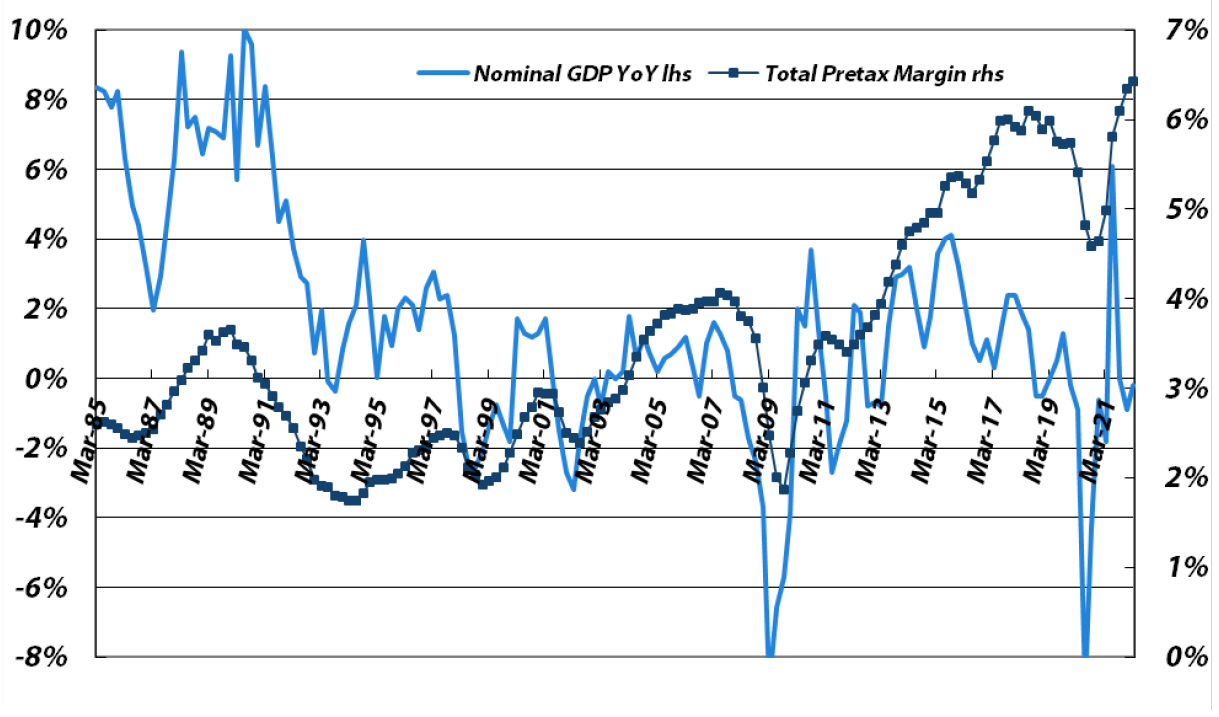 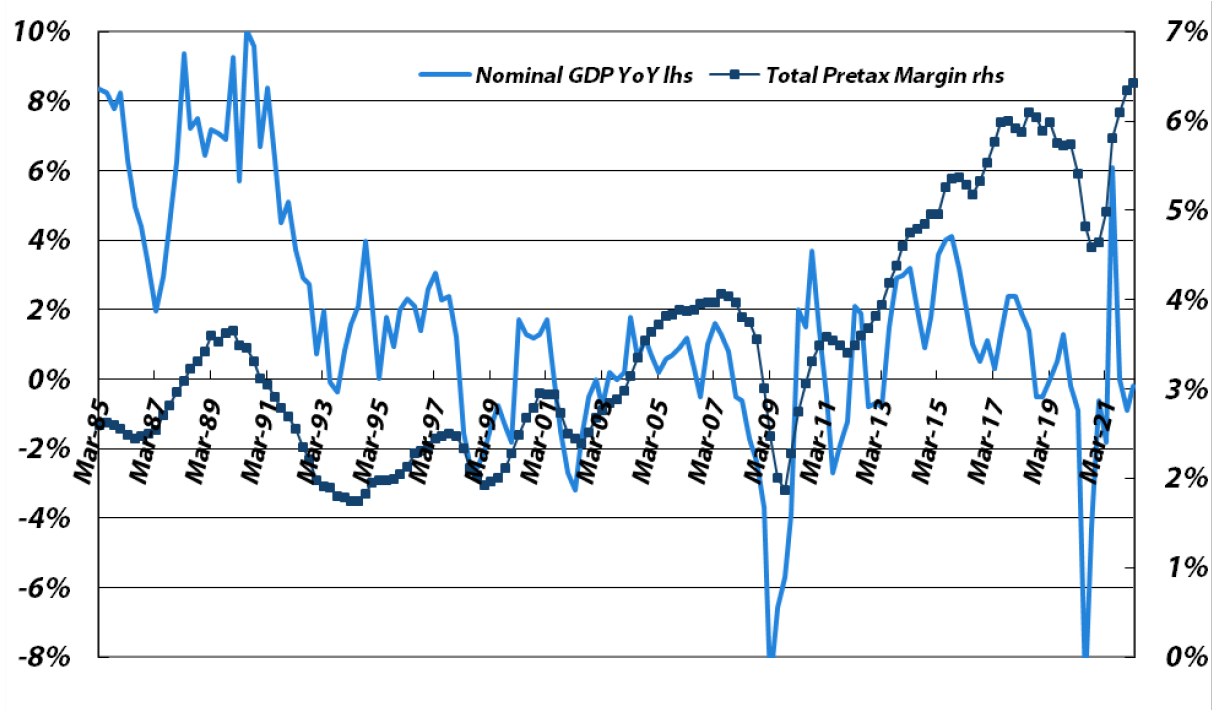 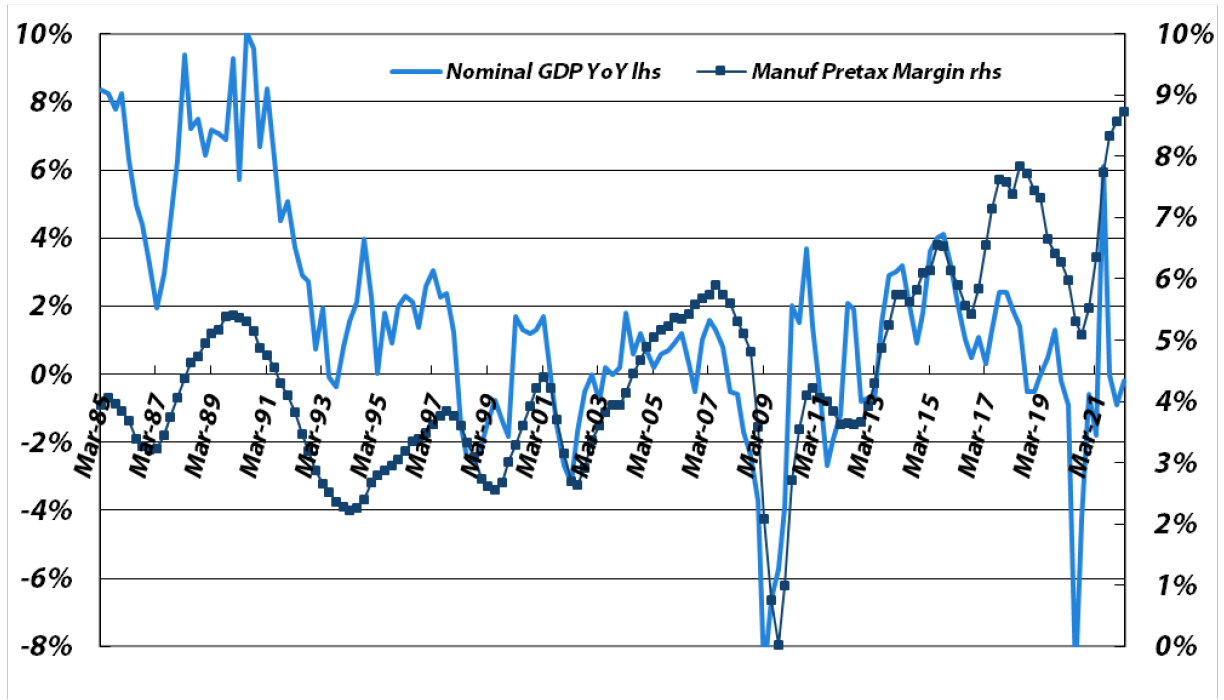 As for dividends, they have risen rapidly too, more than doubling since 2013 for the Tokyo Stock Exchange Index. Crucially, in order to stabilise Japan’s future, an equity/dividend culture must be better established among retail investors in Japan. There have been gradual image improvements for equity investing since the speculative burst of the 1980s bubble, but achieving a structurally higher dividend payout ratio would be a master stroke as most domestic retail investors don’t accept buybacks as a primary reason to invest long-term in Japanese equities whereas they cherish dividend income, especially given prevailing flat or negative interest rates. Clearly, much progress has been made regarding dividends in the past few years, but much more is needed on this front.

As for the corporate view on dividends, even the most reluctant would now likely agree that their prior resistance to corporate governance reform was unwarranted and should realise that holding excess cash is equally unwarranted now and that Japan’s dividend payout ratio is rather low by mature country standards. Unfortunately, many corporations prefer buybacks to dividends for exactly the wrong reason: dividends are sticky and hard to cut, whereas buybacks can drop to zero with minor embarrassment. But this argument implies to current and potential shareholders that these Japanese companies have little confidence in their future, which is somewhat embarrassing and likely far too conservative. Indeed, in order to be effective as a support for share prices, dividends need to be communicated as being maintained at a high level even in a recession, barring grave financial threats to the company. This should protect the Nikkei from falling too far during troubled times and reduce fearful volatility in the long-term. Such would crystalise the domestic equity culture that Japan has long tried to instil, just like most of the rest of the developed world, and also would entice foreign investors back into Japanese equities.

One excellent sign of the domestic equity culture improvement is that assets in “ accumulation investment plans” are surging, especially in special (Nippon Individual Savings Account known as NISA) tax deferred accounts. In March, the annualised rate rose to nearly 2 trillion yen, equalling around 20% of net inflow in investment trusts. The Nikkei reports that “Young people are moving towards asset building due to concerns about retirement, and funds have started to head for long-term asset management in Japan.”1 Thus, although markets have been rocky, individuals are seeing much better income streams than bank accounts by taking on a proper amount of risk, which will very likely prove very wise, as the government here is trying to encourage, in the long-term.


1 Nikkei, 30 May 2022 “Japanese individuals’ investment on track to hit JPY 2 trillion per year, as young people save for their retirement”