All other countries
Download as PDF
by Shigeru Aoyagi, Chief Portfolio Manager
10 November, 2021

Overview of the Japanese healthcare sector

Japan provides low-cost, universal healthcare for all its residents. In a system that aims to give everyone equal access to affordable medical care, the government pays for 70% of the costs, with patients paying the remaining 30%. This system has contributed to Japan becoming a country with one of the world’s highest life expectancies.

However, continuing to provide decent healthcare at a low cost is expected to become a challenge for the government due to changing demographics. Japan is home to a fast aging population; as a result, the cost of treating the elderly is increasing steadily each year. The COVID-19 outbreak exposed the plight of the system, which was nearly overwhelmed by the pandemic.

While its healthcare system is understaffed in many areas, Japan paradoxically has a relatively large number of hospital beds (Chart 1). According to World Health Organization data, as of 2018 there were 13 hospital beds per 1,000 people in Japan, significantly higher than other developed economies with universal healthcare such as Germany (8.0), the UK (2.5), Sweden (2.1) and France (5.9). This highlights the inefficiency of the Japanese healthcare system.

Chart 2 highlights what the Japanese view as the ideal characteristics of a healthcare system: high in quality, low in cost and accessible anywhere at any time. These ideals are still being maintained, but just barely. However, upholding them appears to be straining the healthcare system, in particular the medical personnel running it. Going forward, Japan may have to focus on maintaining or raising the quality of its medical treatment while reassessing its commitment to providing low cost and freely accessible healthcare.

Despite the system’s inefficiencies, at the same time Japanese medical technology is also advancing rapidly. Patients who would have been considered beyond saving as recently as 10 years ago are now able to survive and add many years to their lives while maintaining a certain quality of life thanks to advances in medical technology and medicine. The key to solving the system’s inefficiencies can be found in technology, in our view.

Cancer treatment: An example of how technology can address inefficiencies

The treatment of cancer, the leading cause of death in Japan, shows how technology can address inefficiencies. The blue bar in Chart 3 shows the procedure for cancer patients under the current system. It may vary according to the stage of cancer, but most patients first go through surgery or radiation treatment aimed at the full eradication of the disease. A patient is considered cured if cancer cannot be detected after a period of time following the treatment. However, if the cancer ends up returning, patients go through salvage therapy to prolong their lives. The drugs currently used in salvage therapy not only attack cancerous cells but also damage healthy cells, and patients suffer from strong side effects such as nausea, hair loss and decline in fitness which can shorten their life expectancy. 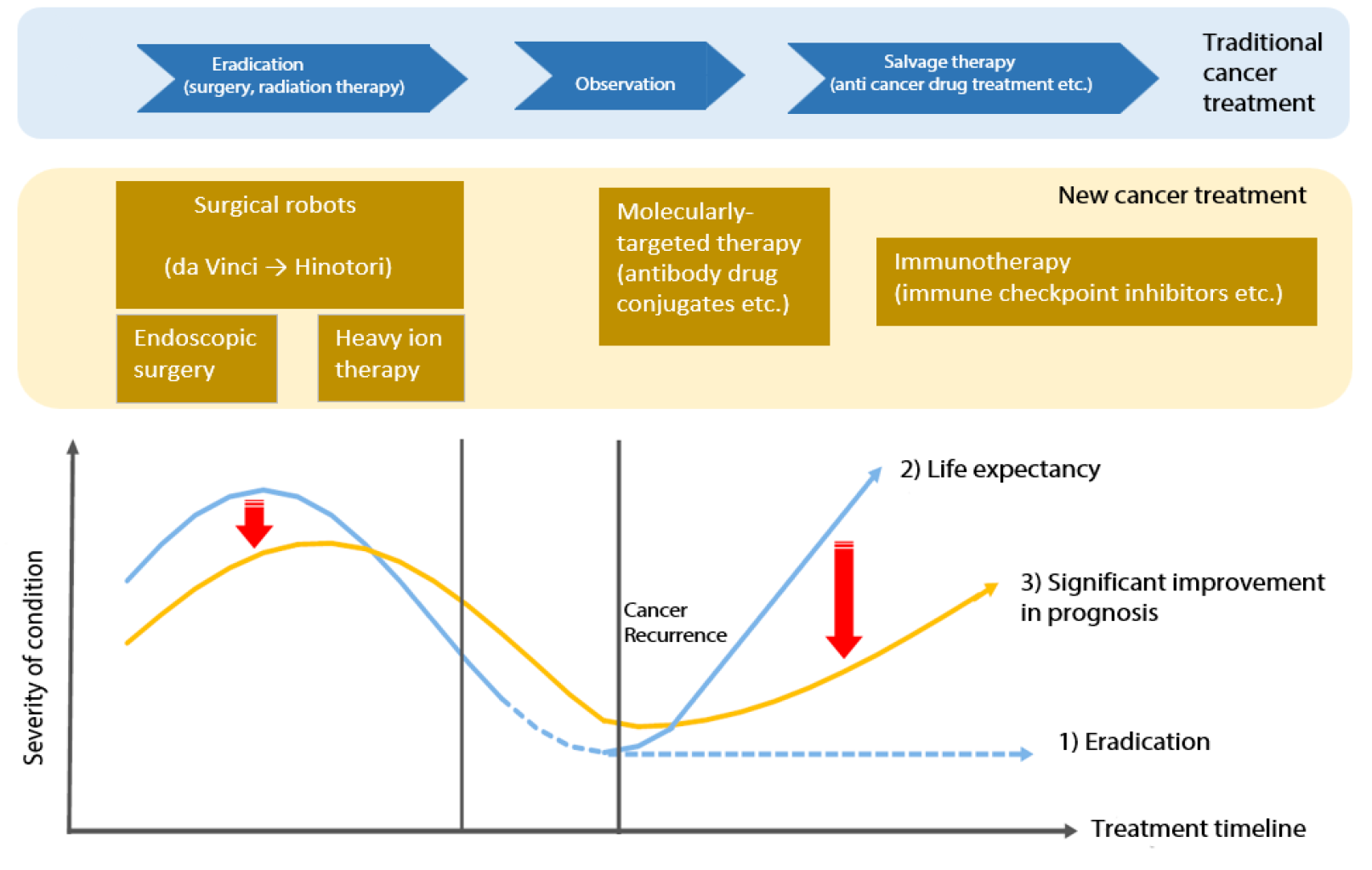 The introduction of the latest medical technology to the traditional cancer treatment process has helped extend the lives of patients and improve the quality of their everyday lives. The utilisation of robotic-assisted surgery systems in the eradication stage leads to a significant reduction in cost by easing the strain on medical staff and reducing the time required for surgery and hospitalisation. In the not-so-distant future, advances in technology are expected to allow patients to benefit from innovations such as remotely-operated medical treatment and surgical procedures that remove cancerous cells that were previously inaccessible. And in salvage therapy, we anticipate the introduction of molecularly-targeted therapy, in which drugs specifically target cancer cells, and immunotherapy, which stimulates the body’s immune system to fight disease. These treatments are expected to improve the life expectancy of cancer patients; for example, those currently with a two-year life expectancy could live more than 10 years while maintaining a certain quality of life if they are treated with the latest molecularly-targeted therapy, immunotherapy and other treatments.

Robotic-assisted surgery systems, which allow surgeons to perform complex operations with more precision than conventional methods, were initially based on military technology pioneered by the US Navy. As a result, US companies are estimated to hold an 80% share of the global market. US companies have dominated the Japanese surgical robot market ever since the Intuitive Surgical Company’s da Vinci Surgical System was introduced in 2000. However, da Vinci’s patents are gradually expiring, creating opportunities for new entrants. Currently, the robotic system leading the pack of new entrants is Hinotori, jointly developed by Kawasaki Heavy Industry and Sysmex Corporation. Hinotori is operated remotely by a surgeon, who can view 3D images from an endoscope. In August 2020, Hinotori became the first robot-assisted surgery system developed in Japan to receive regulatory approval from the Ministry of Health, Labour and Welfare.

Physicians say that the introduction of Hinotori to hospitals could not have come soon enough. This is because Hinotori can be operated at a fraction of the cost of da Vinci, which can run at JPY 1.8 million per operation—a heavy financial burden for patients even if they only have to pay a part of that cost under the universal healthcare scheme. In addition, doctors are charged an extra JPY 500,000 for an operation just to receive authorization to use da Vinci. Hinotori can reduce healthcare costs for both the government and individuals, ease the strain on understaffed medical personnel and potentially enlarge the surgical robot market. The global market, currently estimated at JPY 650 billion (approximately USD 6 billion), is expected to grow rapidly in the next five years. By 2030 the market’s growth could accelerate further if 5G network-linked, remotely operated surgeries become common and if more countries begin adopting robotic-assisted surgery systems.

Japan will find it difficult to maintain the current healthcare system ideals of quality, cost and accessibility as its population ages rapidly. The healthcare system will have to change to keep up with the demographic shift; this may mean prioritizing the above ideals, but it also presents an opportunity to address and correct the system’s inefficiencies. We expect advances in medical technology to play a key role in improving and resolving healthcare system efficiency. Next generation robotic-assisted surgery systems, such as Hinotori, can ease the strain on understaffed medical personnel and greatly reduce the cost of surgery. The surgical robot market is poised to grow significantly, creating opportunities for companies seeking to challenge da Vinci’s dominance through innovation. In the future, the development of various therapies and medical robot technologies could play a key role in significantly improving the prognosis and quality of life of patients; we expect such developments to enhance the reputation of the healthcare sector and its associated companies from a social responsibility perspective.