Dispelling negative notions about Japan amid its increasing importance

All other countries
Download as PDF
by John Vail, Chief Global Strategist
01 July, 2021

Both China and the West are courting Japan because it controls critical technologies and essential components, including the raw materials used for producing such, especially for “Green Technology” and semiconductors. Besides producing advanced semiconductors, it also dominates several of the highest value-added portions of the semiconductor production equipment process. Meanwhile, according to the National Institute for Environmental Studies in Japan, in 2018 Japan filed roughly 15,000 international patents related to decarbonisation,1.7 times the amount of second-ranked US. In fact, Japan has taken the top place for 10 straight years since 2009. Furthermore, Japan has also filed the most international patents related to hydrogen energy since 2001. One should also note its leadership in the crucial upcoming field of power semiconductors—an energy efficient technology will see its demand soar.

The US is also supporting Japan militarily more than ever due to China’s increased military activity. Related to this, the US and Japan have begun and will increase further their inter-reliance in critical supply chain areas, while also cooperating on increasing export control mechanisms for such.

Thus, protectionism and pressure for currency appreciation on Japan from the US will likely be absent. Meanwhile, besides various symbolic threats, China will likely refrain from aggressively antagonising Japan or its companies except in the case of urgent crucial self-interest.

Japan’s population has long been decreasing, but challenging demographics can be overcome. Indeed, countries with high productivity and increasing labour force participation can overcome demographics. Chart 1 shows Japan’s nearly two-decade inverse correlation between its workforce and corporate profits. Major improvements in corporate governance have clearly assisted profits too. We have little doubt that Japan can continue to counteract demographics in these ways, with corporate profits continuing their strong upward trend, and thus rewarding shareholders. 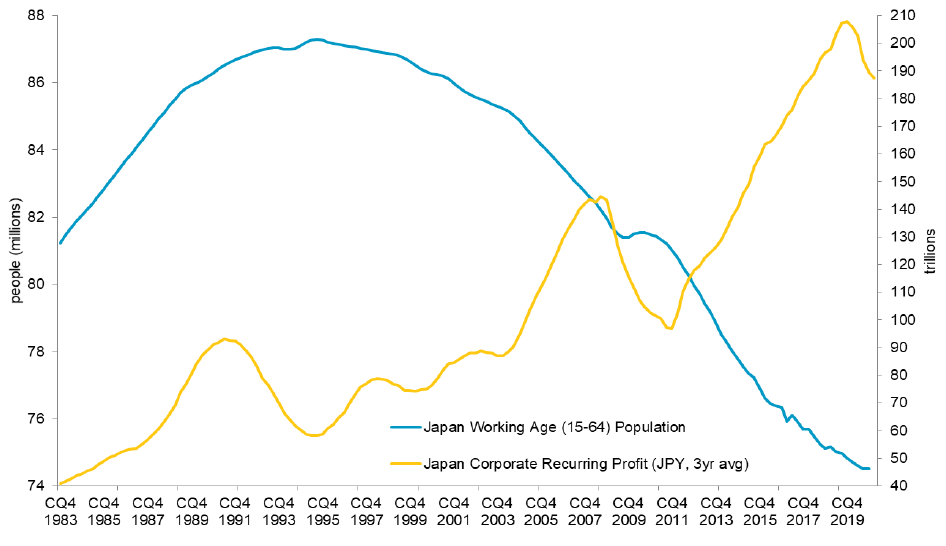 Low GDP growth/”no-flation” can be overcome

Demographics are often a factor in slow economic growth, and investors often bemoan Japan’s case, but this should not be a major concern. Indeed, similar to Chart 1, there has been a 20-year bull market in profit margins (interrupted by global crises), due to improved technology, corporate governance and global, especially Asian, economic growth. Net profit margin growth has been even higher due to corporate tax cuts, and EPS growth has been heightened ever further due to hefty buybacks. 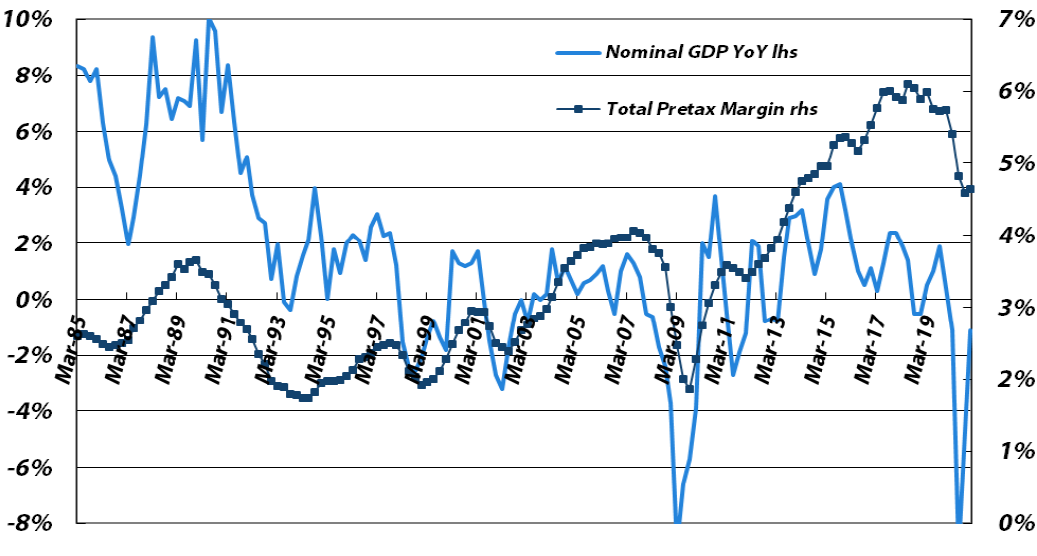 Source: Japan MOF, Economic and Social Research Institute (through 2020, as of April 2021)

Dispelling other negative notions on Japan:

As shown above, Japan’s stock market does not deserve many of the ages-old worries and criticisms. Indeed, while not every company or circumstance is perfect, its performance, though lower than that of the US, has steadily outperformed, in constant currency terms, its other main global market rival, Europe, since late 2012 when Shinzo Abe was elected to lead the LDP. This is the era that is truly relevant as history for investors. Indeed, Japan virtually matched MSCI World Index’s performance, in constant currency terms, since that time through mid-2018, but it has stumbled in terms of relative performance since then; although it is notable that the market is not far from its recent historical high (ignoring the nearly-irrelevant bubble period).

With Japan’s current situation being somewhat dulled by economic restrictions related to hosting a safe Olympics, the stock market has recently flattened, but earnings estimates continue to ratchet higher, and, thus, PE valuations are attractive. The odds are quite high that during and after the Olympics, the domestic economy will rebound sharply, which, although already somewhat expected by the market, should be a buying catalyst for many wary investors. For many domestic investors in particular, having missed the long-term equity rally, both in terms of capital gains and steady dividend income, would have been painful; given current conditions and the future outlook, attitudes will likely become much more pro-active and cause the domestic equity culture to increasingly thrive. Thus, even if foreigners somehow neglect Japan’s stock market, it will likely continue to rise in the intermediate and long term.