All other countries
Download as PDF
by Raphael Marechal, Head Portfolio Manager – Emerging Markets
06 May, 2021

Emerging Markets (EM) debt began 2021 by consolidating after an exceptional performance at the end of 2020. The negative performance was mostly driven by a widening of US Treasury yields while spreads remained broadly unchanged. EM external debt delivered -4.54% over the first quarter despite risk sentiment being supportive. Indeed, vaccine deployment picked up pace throughout the quarter, particularly in developed economies. This helped support demand for commodities and benefitted a number of commodity producers, such as South Africa, Russia, Indonesia and Mexico; consumer goods were goods were also supported, to the benefit of Chinese exports and global trade. However, huge fiscal stimulus and massive infrastructure programs have also boosted inflation expectations, leading to a rise by US Treasury yields that also supported the US dollar and weighed on EM local bonds.

As the negative performance was mostly driven by external factors, there were little discrepancies within the EM universe in terms of performance. However, Latin America underperformed slightly due to the mismanagement of the COVID-19 pandemic by a number of countries within the region. Finally, oil prices remained well supported, drawing extra support when a cargo ship blocked the Suez Canal for several days. This was a bonus for the fiscal positions of energy producers such as Russia, Malaysia, Mexico, Colombia and Brazil. Concerning idiosyncrasies, Turkey again came under the spotlight when President Tayyip Erdogan decided to sack the head and deputy head of the country’s central bank. Erdogan was not satisfied with the central bank’s orthodox monetary policy and spooked market participants with his complete U-turn. Finally, India was in the eye of the storm, its economic recovery postponed by the country’s worsening COVID-19 outbreak. 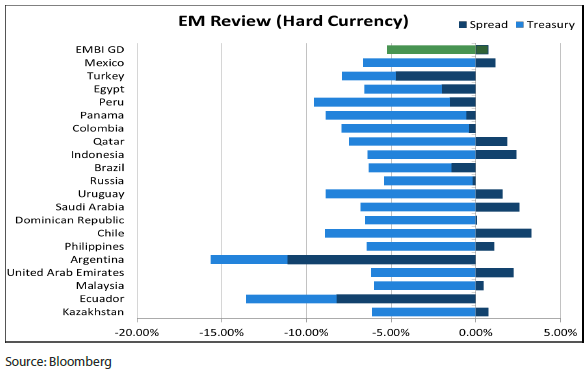 EM local debt performance was -6.68% over the quarter as higher EM rates detracted to performance and EM currencies faced a very strong US dollar.

The Federal Reserve is likely to remain highly accommodative, with its price stability and employment metrics still a long way from target. Consequently, we believe that the reflation theme will continue to be the dominant factor in the coming weeks, although it is likely to become less US centric and eventually trickle down to EM economies. Some EM countries (e.g. Brazil, Turkey, Russia and China) have anticipated this external stimulus and have already started to normalise their monetary policies by removing some of the liquidity created at the peak of the COVID-19 pandemic. This should increase real rates in the EM space, and combined with healthy current accounts positions, restore the attractiveness of EM currencies relative to their developed peers. We already see EM funds flows coming back into fixed income and “buying the dip” after the consolidation in Q1.

Risks to the outlook

For many emerging economies, vaccines may not be available until late in the year. As such, their economic recovery may remain subdued and intermittent as many emerging economies continue to battle fresh waves of infections. This could be decisive for many countries that are dependent on human mobility, either directly through tourism, or indirectly through the demand generated for energy commodities. Hence, while we remain optimistic of a recovery, we expect some delays and setbacks along the way.

Geopolitical tensions persist and they can often erupt without warning. Relations between China and the US remain tense despite a change in US presidency. Iran appears keen to hasten its nuclear program and thus potentially threaten the geopolitical stability in the Middle East. Russia also seems intent on antagonizing its democratic rivals; it is like to face additional sanctions due to its involvement in the conflict in eastern Ukraine.

Finally, the risk of social tensions could be exacerbated by rising inflation in emerging markets. We all remember how food inflation helped trigger the Arab Spring of December 2010 and government social programs will be key to prevent a repeat of such an extreme scenario.