All other countries
Download as PDF
by Asian Fixed Income Team
17 January, 2022

US Treasury yields mostly higher in December
UST 10-year yields ended December at 1.51%, about 6.6 bps higher compared to the previous month. US non-farm payrolls printed at 210,000 in November, below market consensus of about 570,000. While the payrolls number was weaker than expected, the unemployment rate fell to 4.2% from 4.6%. Both headline and core consumer price index (CPI) accelerated, to 6.8% and 4.9%, respectively. UST yields moved higher after US Federal Reserve (Fed) Chair Jerome Powell suggested quantitative easing (QE) tapering could end sooner as inflation has broadened and appears more persistent than expected. Several Fed speakers have also continued to shift to a more hawkish stance amid the increasing threat of inflation. The upward pressure on yields was sustained after the December FOMC meeting, at which the faster pace of the asset purchase taper was confirmed; the central bank also indicated an earlier and steeper rate hike path via the dot plot. Meanwhile, concerns about Omicron increased as the new COVID-19 variant spread rapidly in various countries.

Note: Bond returns refer to ALBI indices quoted in local currencies while FX refers to local currency movement against USD. ALBI regional index is in USD unhedged terms. Returns are based on historical prices. Past performance is not necessarily indicative of future performance.

Inflationary pressures continue mounting in November
Headline inflation prints in most countries accelerated in November due to continued supply shortages. In China, CPI inflation rose to 2.3% year-on-year (YoY), from a 1.5% increase the previous month, driven in part by a low base and higher food prices. In Singapore, headline inflation jumped to a higher-than-expected 3.8% YoY on the back of higher transport and electricity prices. Malaysia’s CPI printed 3.3% YoY in the same month, from 2.9% in October, as transport and housing costs increased. Similarly, inflationary pressures in Indonesia climbed, with the CPI printing 1.75% YoY in November, from 1.66% in October.

ASEAN and Indian monetary authorities keep policy rates unchanged
ASEAN central banks and the Reserve Bank of India (RBI) kept their policy rates unchanged in December, opting to maintain an accommodative environment to sustain the recovery of their respective economies. The Bank of Thailand (BOT) kept its policy rate unchanged and downgraded its 2022 growth forecast to 3.4% from 3.9%, citing Omicron as a risk to growth. The BOT also expressed concern over the Thai baht’s strength, noting that it would consider taking actions to stem further appreciation if necessary. Similarly, the Bangko Sentral ng Pilipinas (BSP) kept its benchmark policy rate unchanged, and said it sees continued economic recovery despite the emergence of Omicron. In Indonesia, the central bank kept its policy rate at 3.5% and suggested that it will hold rates stable until domestic inflation picks up. Notably, Bank Indonesia stressed that monetary policy will be "pro-stability" in 2022, with more of a focus on rupiah stability, compared to a "pro-growth" stance in 2021. Elsewhere, although the RBI kept its policy rates unchanged and maintained its growth and inflation targets, it announced an increase in the amount of 14-day variable rate reverse repo (VRRR) auctions.

PBOC reduces RRR and one-year LPR, raises foreign exchange RRR by 200 bps
China’s central bank moved to shore up the economy, cutting the reserve requirement ratio (RRR) for major commercial banks by 50 bps and lowering the one-year loan prime rate (LPR) to 3.8% from 3.85%. Notably, the cut in the LPR was the first since April 2020. In December, the PBOC also announced that financial institutions would need to hold more foreign currencies in reserve. The central bank hiked the foreign exchange RRR for a second time in 2021, to 9%, a day after the yuan advanced to its strongest level against the US dollar since May 2018.

Separately, the Politburo—the Communist Party’s top decision-making body—released a memo following its December meeting and highlighted “stability” as the top priority for the economy in 2022, underscoring its concerns about the ongoing slowdown in growth.

Slightly cautious on both duration and Asian currencies
The spread of Omicron casts a shadow on the global recovery outlook as it has resulted in social restrictions, cancellation of flights, reduced tourism and other negative developments. Uncertainty remains over Omicron, such as the risks it poses to the public health system and the effectiveness of vaccines towards the variant. That said, preliminary studies published in the UK and South Africa seem to suggest that symptoms caused by Omicron appear to be milder than those of previous variants. On the other hand, major central banks are turning more hawkish on the back of inflation pressures and economic recovery. Consequently, we deem it prudent to hold a slightly cautious stance on duration and a slightly defensive stance on Asian currencies.

Asian credits weaken anew in December on rising UST yields
Asian credits retreated by 0.24% in total return terms, as spread returns were unable to offset the rise in UST yields. The divergence in performance between Asian HG and HY segments continued during the month. Asian HG credits declined 0.07%, in spite of spreads tightening 6.3 bps. In contrast, Asian HY continued to be weighed down by concerns around the Chinese property sector and returned -0.94% in the month, with credit spreads narrowing 170.5 bps. This comes after defaulted names such as Evergrande and Kaisa were removed from major bond indices at the month’s end.

The Asian credit market continued experiencing volatility at the beginning of December, with ongoing negative headlines surrounding the Chinese property sector, particularly the few names faced with large maturities in the next two to three months. Property sales in China were also far below expectations in November. Negative headlines about technology and Macau gaming sectors continued to create further headwinds for China credits. Later, market sentiment was boosted as various Chinese authorities and regulators highlighted support for home mortgages and financing for high quality developers following Evergrande’s official default announcement as it failed to make coupon payments after the passing of the 30-day grace period. Contagion was further mitigated after the PBOC unexpectedly cut the RRR, which would release renminbi (RMB) 1.2 trillion of liquidity, showing that the government’s priority was shifting towards ensuring growth stability in 2022. This shift was affirmed by a statement released after the Central Economic Work Conference. However, overall risk sentiment remained capped as investors weighed the potential negative impact on global mobility and growth recovery resulting from the rapid spread of Omicron.

Within Asian credit, the striking gap between China and the rest of the region remained. Chinese credit spreads widened, while spreads of other large country segments like India and Indonesia tightened in December. Towards the month-end, aside from the defaulted names expected to be dropped from major bond indices, weakness in the Chinese property sector was fairly contained following a slew of reassuring comments from policymakers and regulators. Demand for credits in India, Indonesia and Philippines remained supported with the resumption of hard currency Emerging Market (EM) fund inflows. Weakness in Thai credits was partly attributed to news that the government was temporarily halting applications for its quarantine-free travel arrangement due to the recent surge in Omicron infection rates. By sector, considerable spread widening was focused on real estate, while spreads in other sectors ended the month mostly narrower.

Primary market activity moderates
New issuances for Asian credit slowed down in December going into the year-end. There were 28 new issues, which raised a total of US dollar (USD) 6.37 billion in the market. The HG space saw eight new issues amounting to about USD 2.95 billion, including a USD 500 million issue from China Construction Bank and a USD 300 million CEB International issue. Meanwhile, the HY space saw approximately USD 3.42 billion worth of new issues raised from 20 issues. 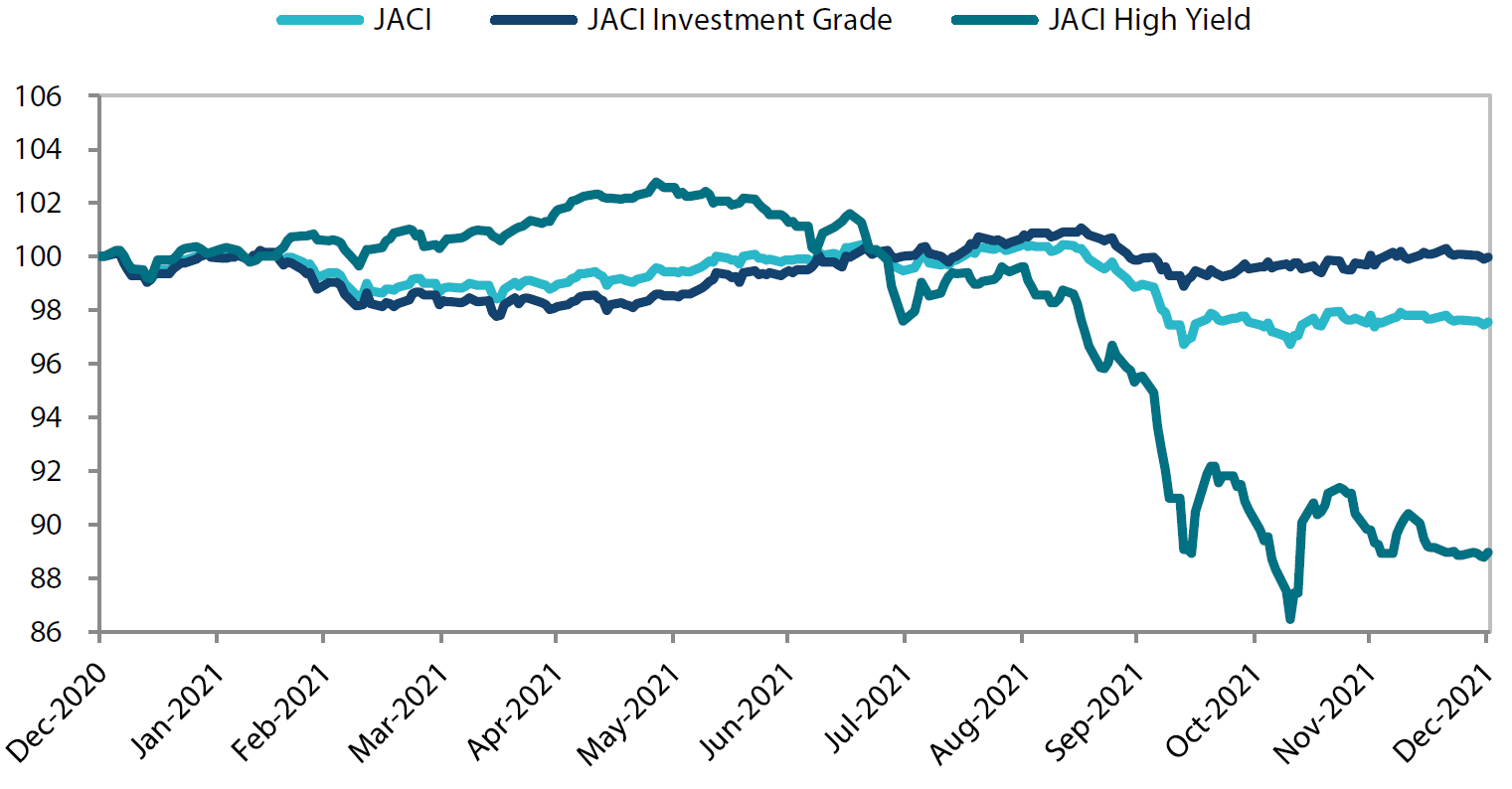 Note: Returns in USD. Past performance is not necessarily indicative of future performance.

Fundamentals supportive of Asian credit spreads, though downside risks have increased
We believe that the macro backdrop and robust corporate credit fundamentals remain supportive of Asia credit spreads. Tentative improvements in the COVID-19 situation across many Asian economies reinforce our view that the setback to growth in mid-2021 was temporary. We believe that the progress on vaccine rollouts, the gradual re-opening in a number of countries and continued support from fiscal and monetary policies should revive the growth momentum heading into 2022.

We expect overall corporate credit fundamentals to remain robust, with earnings growth staying strong—albeit with a slight moderation as compared to the pace seen in 2021. Corporate leverage and interest coverage in Asia are expected to remain manageable overall, although some divergence across sectors is likely. Notably, weak sales and liquidity pressure could continue to impact the weaker developers in the China real estate space, potentially leading to more distress or default events. However, there have been tentative signs of authorities stepping in to stabilise credit access and market sentiment to prevent an over-correction that could lead to systemic risks. We believe that credit selection will remain key although overall valuation and more benign policy environment going forward argue for spread tightening and opportunities in this space.

The key downside risks to Asian credit in 2022 include a deeper China economic slowdown and more aggressive tightening of monetary policy in the US and other major economies in response to prolonged, elevated inflation. Economic recovery from the COVID-19 pandemic may suffer a setback with the possibility of the emergence of new mutated variants that may reduce the effectiveness of the vaccines. Meanwhile, despite some recent positive developments, uncertainties relating to US-China relations remain in the background.

Reference to individual stocks is for illustration purpose only and does not guarantee their continued inclusion in the strategy’s portfolio, nor constitute a recommendation to buy or sell.