All other countries
Download as PDF
by Asian Equity Team
15 April, 2021

After delivering consecutive monthly gains in January and February, Asian stocks succumbed to profit taking in March as hopes over a vaccine-led regional economic recovery were overshadowed by persistent reflationary concerns and rising global bond yields. For the month, the MSCI AC Asia ex Japan Index fell 2.5% in US dollar (USD) terms. Within the region, Singapore, Thailand and India were the best performers (as measured by the MSCI indices in USD terms), while China, Indonesia and the Philippines were the worst performers.

Singapore, Thailand and India outperform, Hong Kong and South Korea turn in muted gains
Singapore stocks jumped 5.1% in USD terms in March, buoyed by vaccine-related optimism and the easing of COVID-19 workplace restrictions in the city state, which allows 75% of employees (up from the previous 50%) to return to the office from 5 April. In Thailand, stocks turned in USD gains of 2.4% for the month as higher oil prices supported the country’s heavyweight energy sector. Thailand’s cabinet approval of additional fiscal and financial support measures worth Thai baht 360 billion also lifted the country’s stocks in March. Elsewhere, stocks in India rose 2.3% in USD terms on expectations of a sustained economic recovery as the nation continues to roll out COVID-19 vaccines. Bank shares rallied after India’s courts ended a six-month moratorium on loan repayments, which were enacted after the government-imposed COVID-19 lockdown.

For the month, stocks in Hong Kong and South Korea saw marginal USD gains of 0.4% and 0.2%, respectively, as optimism about a vaccine-led economic recovery was offset by lingering reflationary worries.

China, Taiwan, Indonesia, the Philippines and Malaysia fall
In China, stocks dived 6.3% in USD terms due to a worsening of the already fragile Sino-Western relationship after sanctions were imposed by the US, European Union (EU), Canada and the UK on Chinese officials for alleged human rights abuses in Xinjiang. Beijing hit back immediately with broad punitive measures against the EU. In addition, measures by a US securities regulator to remove more Chinese companies from US stock exchanges also weighed down China stocks. In Taiwan, stocks fell 0.6% for the month, due to an underperformance of index heavyweight TSMC after Intel announced plans to spend as much as USD 20 billion to build two new factories in Arizona in a bid to challenge its Asian rivals in the advanced chip manufacturing arena. Other Asian markets that struggled during the month included Indonesia (-6.3% in USD terms), the Philippines (-4.7%) and Malaysia (-2.0%). In Indonesia, rising US bond yields weighed heavily on stocks and the rupiah in March, while equities in the Philippines retreated after the country reimposed COVID-19 restrictions in Manila and other cities due to rising coronavirus cases.

1Note: Equity returns refer to MSCI indices quoted in USD. Returns are based on historical prices. Past performance is not necessarily indicative of future performance.

Important implications from the global net zero carbon shift
Amidst the yield curve steepening and the growth-value rotation in the stock markets, we think one of the most important structural changes in the last year has been somewhat overlooked by the market. The ongoing global synchronised push towards net zero emissions is one of the most important shifts over the next decades and will have profound geopolitical and economic implications for the region, in our view.

Apart from obvious fundamental supply side changes in the energy and resources space, the move towards global net zero carbon could also result in a tectonic shift in global economic competitiveness. Countries which are ahead in the emissions curve would enjoy improved energy independence and export competitiveness across multiple verticals in the era of climate change, while the converse is true for economies which do not or are unable to adapt appropriately. Potential impending regulatory changes, such as carbon taxes and the resultant supply chain scrutiny, could portend much tougher times for companies with poorer carbon footprints. Hence, over the last couple of years, we have invested a significant amount of time and resources to enhance our ESG-integrated investment philosophy and process, which we hope will give us an edge in picking quality companies with positive change and sustainable returns in this era of climate change.

China’s ambitions to be a green energy powerhouse likely strategically driven
China's decarbonisation is the single most important factor for global decarbonisation by virtue of its colossal economic output and emissions mix. For those who question China's commitment, the pertinent thing to understand is that China's net zero ambitions are likely strategically driven, as opposed to an ideologically driven push to protect its environment. At the heart of China's commitment to net zero carbon is its ambitions around energy security and independence, which will provide wiggle room for it to pursue more domestic growth. Becoming a green energy powerhouse would also enhance China's export competitiveness as global regulations evolve around climate change. Hence, with estimates such as USD 16 trillion of infrastructure investments and 40 million new jobs being bandied around, climate technology is likely an area of national priority alongside the country's efforts in other areas such as 5G, industrial automation, digitisation and healthcare. The recent market selloff thus presents an attractive opportunity, in our view, for patient capital to invest in quality companies with long-term sustainable returns in these structural areas of growth.

South Korea and Taiwan well-positioned in the climate-technology supply chain
Within technology-focused countries such as South Korea and Taiwan, many companies are also well-positioned to be important cogs of the climate technology supply chain, providing additional diversification to these economies, which are already very much leveraged to the increasing demand for technology, healthcare and industrial automation.

Challenging transition to renewables for India and emerging ASEAN
India and emerging ASEAN face a more challenging transition to renewables in comparison to their North Asian neighbours. Policy uncertainties, nascent incentive structures, infrastructure constraints and stiff competition present some degree of risks to sustainability of returns in green investments. That said, prospects for renewables in India remain very positive, particularly in solar and wind. If India is able to invest productively in clean energy in the years to come, it could lead to a structural improvement in its current account as the country sheds its unhealthy dependence on oil imports.

Within emerging ASEAN, Vietnam appears to be outpacing its neighbours due to better demand growth prospects, planned capacity additions and proven feed-in-tariff schemes. While decarbonisation remains a work in progress in these countries, we continue to focus on domestically geared sub-sectors benefiting from trends such as market consolidation, formalisation and companies that reduce the friction of doing business, namely private sector banks, digital services and logistics. 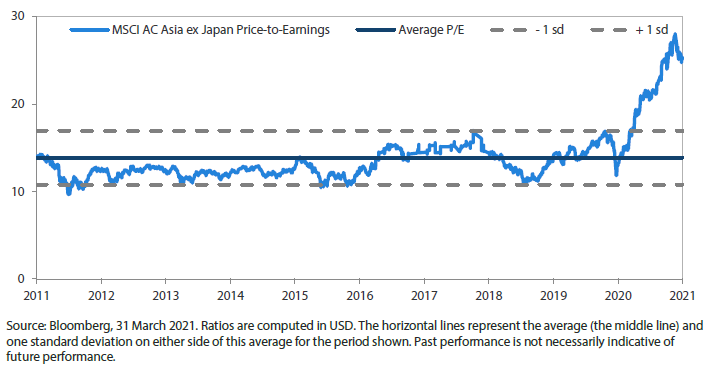