All other countries
by Andrew Hunt, International Economist
27 September, 2018

While it is difficult to believe that it is ten years since the GFC, the world has changed significantly since then. Although the US financial system remains the dominant force within global capital markets & flows, the way in which banks and financial institutions operate has evolved in the QE / low rate regime. However, as nominal rates rise, and “QT” occurs, institutions may have to alter their behaviour once again. This may have very big implications for how markets operate and function – the last ten years will not provide a reliable guide to the next few years and nowhere will this be more apparent than in the ‘quant’ funds.

Meanwhile, within the global real economy, China has become the dominant source not just of global GDP growth but also global trade growth. Indeed, we would argue that while the US may still be the arbiter of global liquidity, China is now the arbiter of global economic growth trends. It will therefore be vital to ‘get the China outlook correct’ but this will be no easy task given China’s modest number of data releases and its policy of data suppression. We very much doubt that simply assuming that China will be alright will suffice in the future.

The Rise of the Mega Banks, the Trump Stimulus and Corporate Zaitech

During the 1990s, the global financial sector started to consolidate into a small number of ‘mega-banks’. Since the GFC, this process has continued and there are now a small number of dominant institutions within the global system. Consequently, we can argue that there are now relatively few key decision-makers within markets and that we are now a long way from perfect markets. This may encourage markets to move in one direction for periods of time before abruptly reversing. Volatility measures may therefore become ‘spikey’.

During 2017, the Trump Administration injected almost $300 billion into the US financial system and this was recycled into an intra-financial system credit boom. The recipients of the Trump-injection both provided leverage to the US domestic credit markets and to financial systems abroad. The former underpinned flows into the US corporate bond markets and so allowed US companies to continue issuing bonds, so that they could provide both large dividends and buy-backs to their equity holders. Naturally, these flows have been instrumental in supporting equity prices thus far. 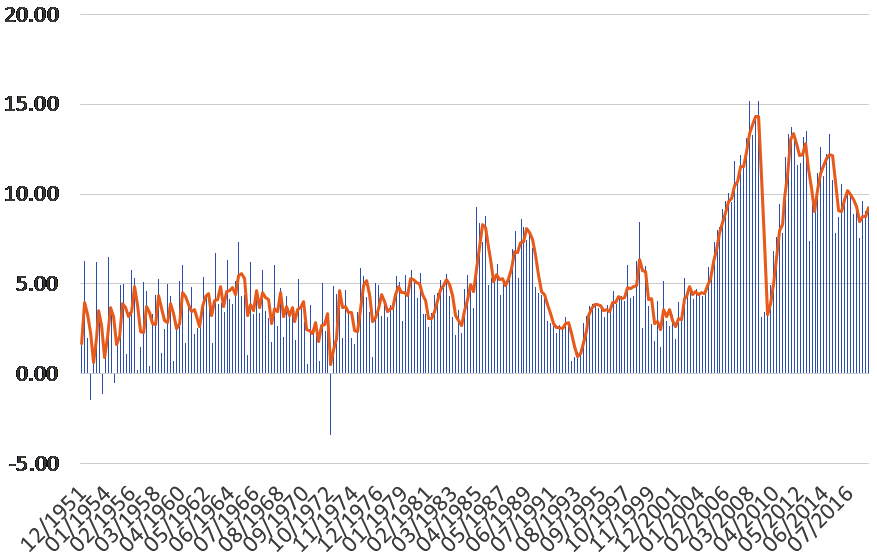 We believe that this massive distribution of cash has been a key factor in the equity markets’ positive behaviour in 2017. In addition, we can observe that the large outflows of credit from the US both weakened the dollar and provided the necessary funding for a boom in Emerging Markets.

QT and the Federal Reserve

Given the ongoing strength in the US economy, we expect the US Federal Reserve to not only raise interest rates but also to significantly reduce the amount of ‘settlement cash’ available to lenders within the US financial system. If this occurs, then by definition US institutions will be able to lend less to their domestic clients and they may well be obliged to withdraw credit from their overseas clients.

Higher rates and a withdrawal of ‘quantity’ from the US financial system will significantly reduce the ability of corporate America to buy-back its own equity and provide high dividend pay-outs. This can be expected to provide a headwind to US equities.

We would therefore suggest that, if the FOMC acts in the way it intends, investors in US equities look towards companies that can grow their earnings, rather than looking for PE expansion.

Meanwhile, we are already seeing clear signs that the 2017 boom in cross-border credit flows has slowed or even gone into reverse and nowhere is this more apparent than in the EM. With the FOMC expected to tighten further, we can expect the unwind of the 2017 credit boom to continue and this will likely result in further upward pressure on the USD exchange rate and upward pressure on real borrowing costs in not only the EM but the world’s other USD-borrowers, such as Australasia, Canada and Sweden. Those countries that are also experiencing weak income growth trends, such as Australia and Sweden, can be expected to witness significant downward pressure on their currencies. 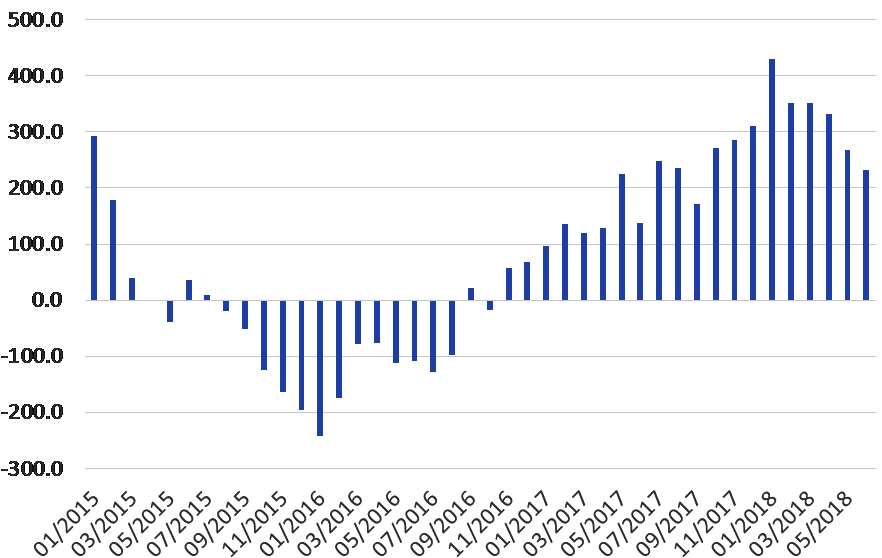 China is An Emerging Market

Unbeknown to many is that fact that, during the 2017 boom, China’s banks became significantly dependent on dollar-funding in order to support their own domestic lending activities. As a result, China’s banks now owe around $300 billion to non-resident financials and we suspect that China’s companies may owe somewhat more. However, now that the global supply of dollars is dwindling, these credit flows to China have slowed with the result that China’s banks have been obliged to slow their own rate of expansion.

Moreover, these large external debts imply that China’s own government is currently constrained with regard to how much it can ‘ease’ in order to provide assistance to the local banks. Specifically, if China were to provide significant amounts of “cheap RMB “to its banks, then the first thing that the banks will do is to repay a large number of their now expensive dollar debts and the implied outflows could lead to a period of sharp weakness in the RMB at would be a politically very inopportune moment. Hence, we expect China’s credit crunch to continue for the time-being. China’s government does not have the freedom of movement that many believe. 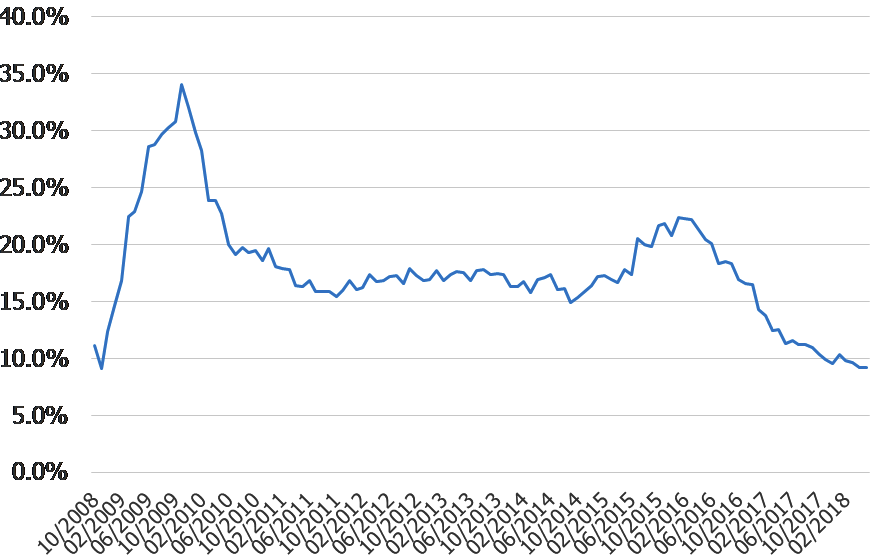 Unfortunately, we estimate that the current rate of credit expansion within China represents only around half of the sum that China’s corporate sector requires in order to cover its current needs. Therefore, we can suggest that China’s companies are facing a credit crunch that may be even more severe than that faced by US and other households ten years ago.

Consequently, we are not surprised to find that China’s economy has weakened significantly and that this has led to a marked contraction in global growth trends. Indeed, we suspect that we shall soon witness a significant downgrading in equity earnings forecasts within the trade dependent economies of Asia, Japan and even Europe.

As a result, the US seems likely to be the only major economy in which corporate will achieve significant earnings growth over the next 12 months. We expect the earnings forecast downgrades to be particularly severe within the Euro Zone, which is much more trade dependent than many expect.

Ordinarily, one would have expected slower growth trends within the EZ to result in lower interest rates within Europe, but this seems unlikely in 2019, given that interest rates are already perceived as being too low for the health of the banking, pension and insurance sectors. In fact, the problems in these sectors may yet oblige the ECB to raise interest rates even as growth slows. We are therefore cautious regarding the outlook for EZ bonds, despite the anticipated slowdown in global growth.

Clearly, 2019 looks set to be a year in which the ‘established norms’ of the post GFC are challenged and quite possibly changed, a scenario that arguably will favour active well-informed managers’ over both the ‘herd’ and of course the computer models. Many of the latter have used only 10-year ‘sample periods’ and hence they will be particularly unsuited to the changing global economic environment. For investors, the next few quarters will offer challenges and opportunities, while for economists the future looks likely to be quite interesting…..