Goldilocks was always a credit junkie

All other countries
by Andrew Hunt, International Economist
30 November, 2018

Goldilocks Was Always a Credit Junkie

The late 1990s and mid 2000s were periods that appeared characterised by above trend growth in much of the OECD and ‘unexpectedly’ low rates of inflation, a combination that was blithely described as the ‘Goldilocks Economy’. Of course, many people ‘on the ground in the real world’ did not ‘believe’ the low inflation data, suffering as they did from consistently rising housing costs, rapidly rising service prices and often stagnant real disposable incomes. This was after all the period in which the squeeze on the living standards of low- and middle-income earners began. Financial markets may have enjoyed these years (albeit somewhat spasmodically) but it is less clear that electorates have been quite so happy.

The popular explanation for the ‘Goldilocks economy’ was the notion that productivity growth (associated with technological progress) had improved and thereby altered the relationship between growth and inflation but unfortunately the objective data did not confirm this – there had been a useful surge in productivity growth in the mid-1990s that we suspect was primarily the result of improved communication opportunities (i.e. the use of emails & the efficiencies created by the internet) but, since the late 1990s. productivity growth has been slowing to what are relatively low levels by the standards of the Post-war period. Some have suggested that the weak productivity data is in fact merely a measurement problem (i.e. how do you measure the benefits of being able to spend time on social media) but, if we take the most basic description of productivity - namely the amount of income produced per hour worked, we can confirm that unless ‘everyone’ is miss-reporting their incomes on their tax forms, productivity growth has indeed slowed or even evaporated over the last 20 years. 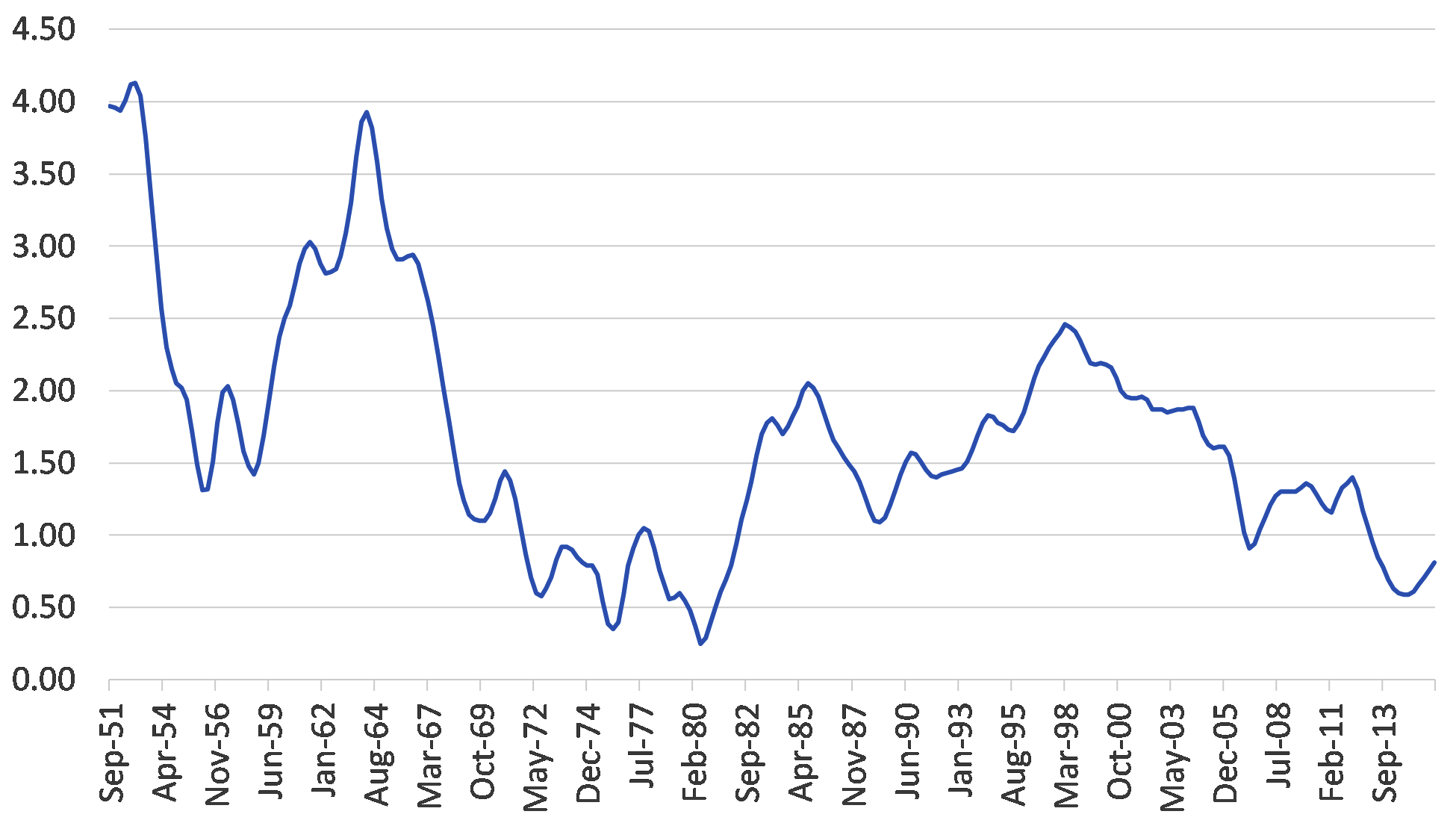 Instead, we suspect that the underlying mechanism behind the Goldilocks Economy was one that was in reality simply heavily dependent on credit, both for the growth in spending that occurred and even the inflation that did not occur.

For example, many of the so-called ‘disruptor companies’ that are credited with reducing inflation rates and in some cases prices are in fact cash flow negative – even the well-known online shopping company makes no money from its core business and its failure to produce normal profits in its wholesale / retail functions has ensured that neither can many of its competitors. Hence, we find that wholesale-retail sector profits have fallen sharply over recent years and the companies concerned have been obliged to rely on constant injections of credit & capital, while generating relatively little cash flow of their own (something that is only now beginning to impact the Private Equity companies). 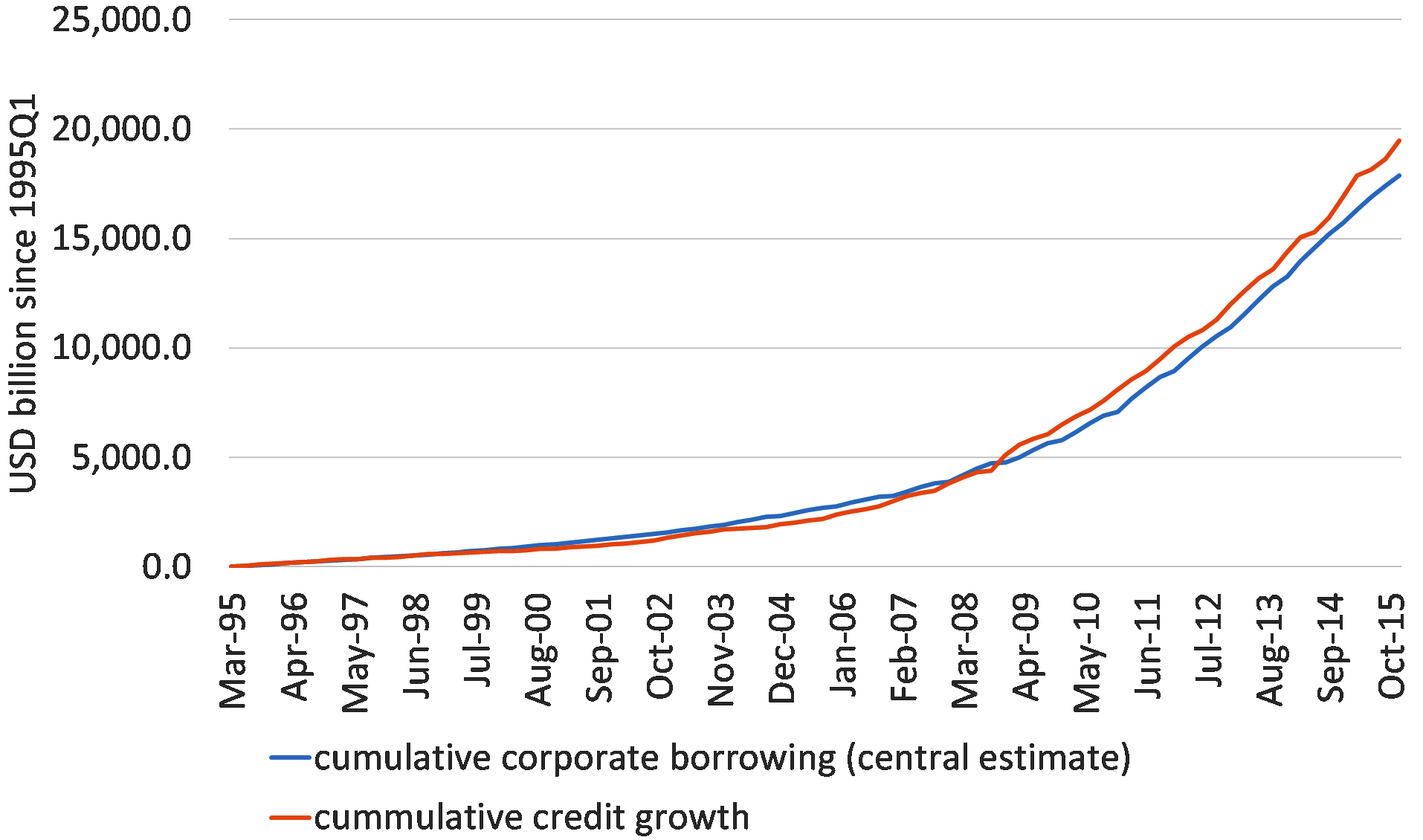 Moreover, it is also all too evident that many of the goods sold by the ‘disruptors’ could only be priced so attractively because the North Asian Economic model has hitherto been not focussed on profitability but rather on the scale of their output and employment. For example, had China’s corporate sector been more profit-focussed, it would have been obliged to charge higher prices for its output and tellingly it would not have needed to borrow more than USD20 trillion since the early 1990s simply to sustain its companies.

The very basis of the North Asian Development model has always been to use ‘cheap’ credit provided by heavily repressed financial systems (hence China’s ongoing need for stringent capital controls) to provide funding for the massive expansion of their cash flow negative corporate sectors, as the latter pursued scale rather than profits. This is also why equity holders in these businesses have often fared badly – despite Asia’s impressive rates of economic growth and the impressive lifting of its population’s income levels, the local share markets have tended to underperform those elsewhere over the cycle.

Albeit very roughly, we estimate that the fall in import prices for consumer goods since 1992 that was led by Asia’s producers has saved US households around $5 trillion on a cumulative basis, an event that was clearly good news for consumers but bad news for those employees and entrepreneurs in the domestic production sectors that had to face the competition implied by what was in effect a very different and quite incompatible economic model.

Indeed, the West’s implied loss of market share in the goods markets implied weak rates of income growth, although in general these seem not to have constrained spending habits, since many societies have witnessed a sharp fall in their savings rates as households have simply borrowed in order to supplement their underperforming incomes.

Moreover, we can also observe that surging rates of credit also allowed property prices to inflate, a process that has not only reduced housing affordability for the masses but also obliged companies whose operations are property-intensive to raise their prices. This is the primary reason why going out to dinner has become so expensive and why High Streets / Main Streets are struggling. High property prices and the speculation / development that they have fostered have had far-reaching negative consequences for societies around the world. 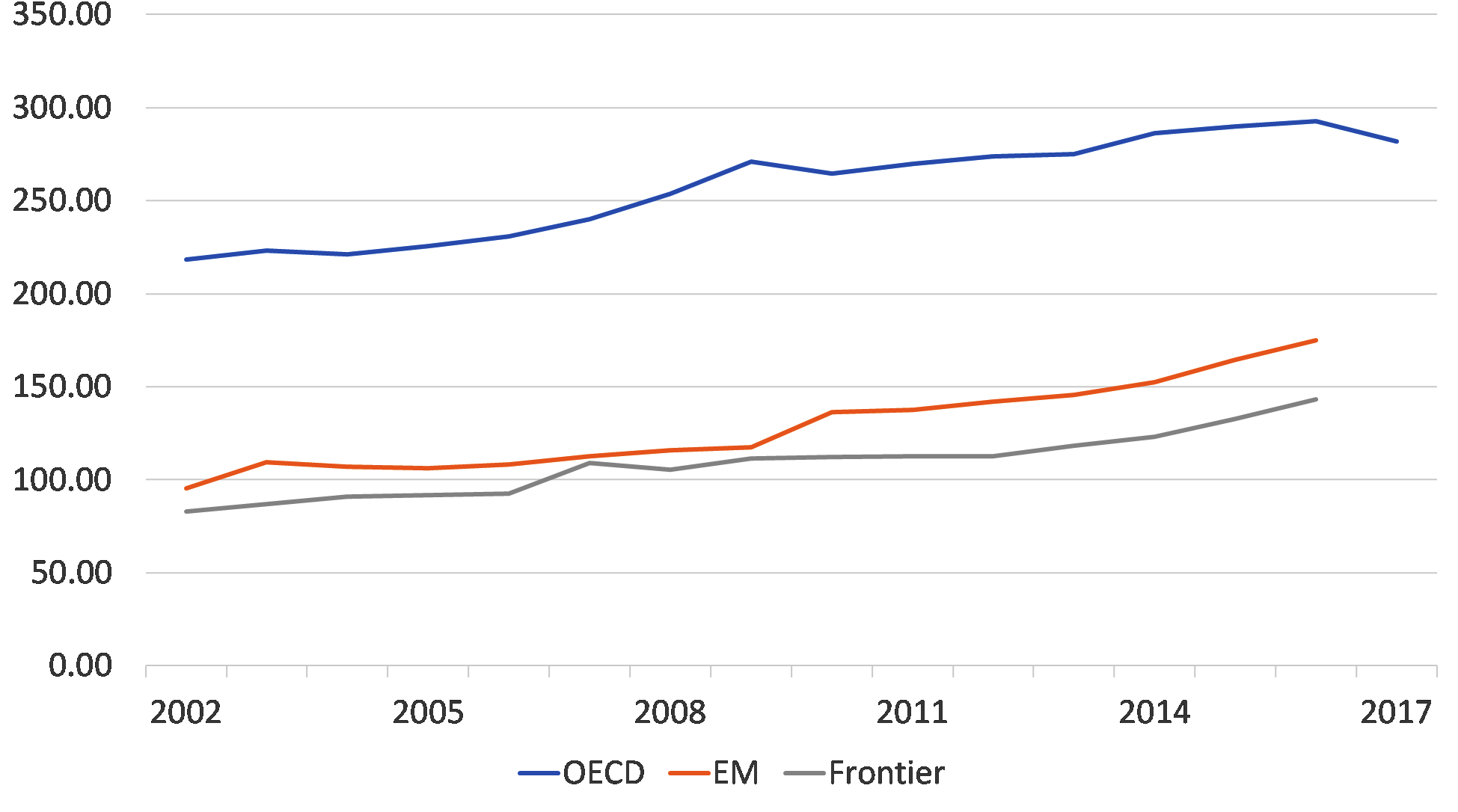 The last three decades have therefore been a period of credit-dependent goods price deflation (largely emanating from Asia but with considerable help from the activities of the “disruptors”), while the inflation of mortgage credit has raised the cost of producing services (particularly those that require property inputs), and so caused higher inflation rates in these sectors. The last 25 – 30 years have therefore been a period of goods price deflation but service sector inflation, with the headline CPI inflation rates merely reflecting a relatively meaningless weighted-average of these two diametrically opposed experiences. 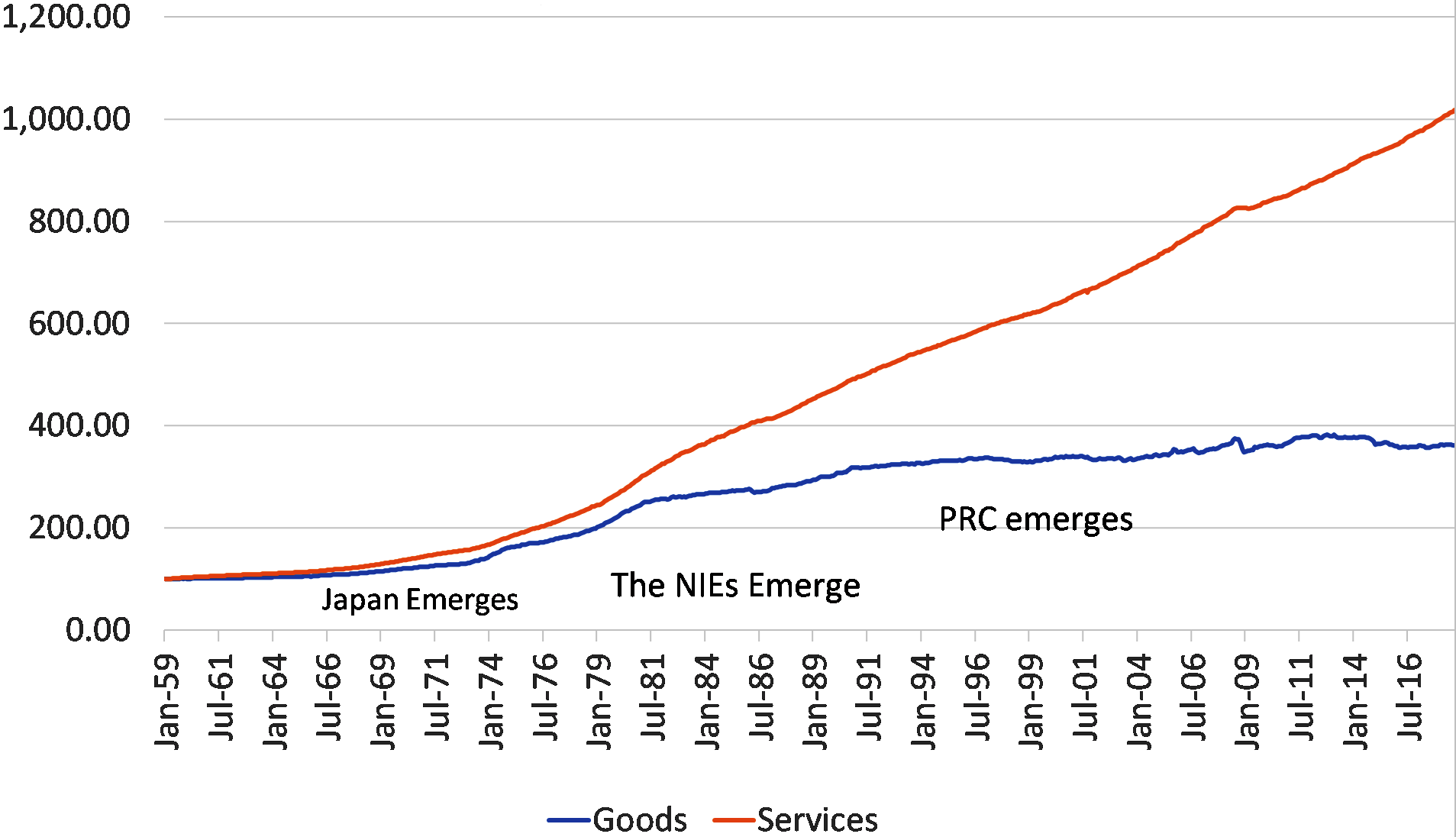 However, the world may be changing. In the USA, the Federal Reserve is pushing ahead with its Quantitative Tightening and thereby presiding over a deflationary contraction in the economy’s monetary base (interestingly, this has really only begun in earnest over recent weeks for technical reasons associated with the Administrations deficit funding policies). In Japan, the 2015-16 era of renewed growth in the financial system seems to be coming to a slow end – each month’s monetary data is just a little weaker than its predecessors. In Europe, the merest hint of an ECB exit from its QE has it seems led to a sharp slowdown in regional monetary trends that appears certain to ensure that growth in the EuroZone will be minimal in 2019. 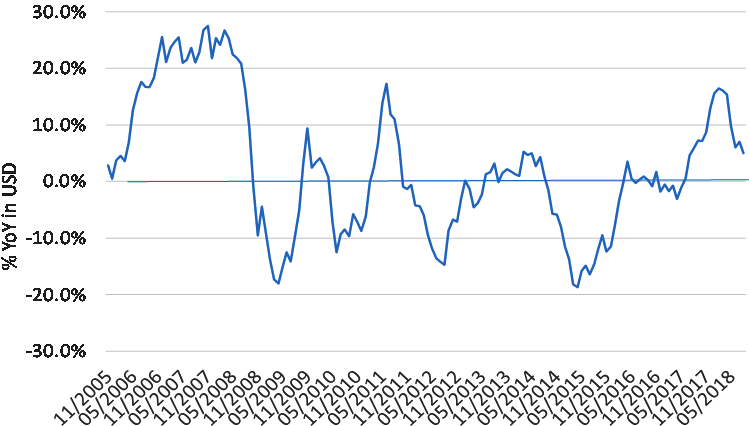 The weaker rates of monetary expansion in the US, Japan and EueoZone would, in the normal course of events, lead us to expect bond-price-friendly lower rates of inflation - or even deflation - ahead. However, the extent of the credit crunch in China adds a new factor to the model.

Quite simply, we believe that China’s economy is inflating as households have started to bridle at the heavy financial repression (hence the sharp drop in domestic savings rates over the last 18 months), while at the same time companies have been obliged to become much more cash flow / profit sensitive in a now distinctly credit-rationed world. As a result, Asian export prices in USD terms have continued to rise of late despite the global economic slowdown, high levels of inventories in Asia, and their own weaker currencies. At present, Asia’s economic slowdown is occurring alongside inflation rather than deflation and ‘stagflation’ is never good news for financial markets.

More conventionally, we would expect the slowdown in the credit cycles within the OECD to undermine housing and property prices and indeed we do find that property inflation rates have in general cooled. Moreover, if the slowdown in credit continues, property prices could deflate, and the tighter credit environment should also cause OECD savings rates to begin rising again, with a negative impact on expenditure growth rates.

We could therefore enter a predominantly deflationary period in the service sectors. Meanwhile, it is also possible that the withdrawal of the credit-subsidy to Asian producers – that was previously so instrumental to the goods price deflation that lay at the heart of the Goldilocks story – could continue to cause goods prices to rise.

In short, the Goldilocks story was all about the credit-fuelled divergence between goods and services prices that has occurred since the 1980s. At a superficial level, this development seemed pleasurable and financial markets certainly appeared to like the process, even as it led to de-industrialization, greater income inequality, and reduced housing affordability in the real economies (events that are now having very real implications for their political systems). However, if the global credit cycle really is turning as the Fed tightens, then we could start to expect falling property prices and rising wages, things that the real economies may in fact need but that financial markets may find disturbing. The potential for stagflation implied by a possible ending of the global credit cycle will likely be the biggest concern for investors in financial markets in the years ahead, even though such an outcome may ultimately be to the benefit of the median household.