All other countries
by Andrew Hunt, International Economist
01 November, 2018

In a parallel development, we find that during the late 1970s and the early 1980s, academic economists began to explore what was to become known as information economics. The central thrust of this work was to attribute cyclical fluctuations in the economies to ‘forecasting errors’. These theories soon found a receptive audience in one Alan Greenspan, who had spent the 1960s and 1970s forecasting the economy on the basis of fluctuations in the inventory cycle. Through Greenspan, and then more recently through Yellen (who is married to one of the original information economics theorists), the concept that policymakers should try not to ‘surprise markets’ gained considerable influence. This shift in thinking marked a dramatic change from Pohl and others’ view in the 1980s that it was their job to be unpredictable so as to prevent people from taking undue risks with credit. Greenspan’s slow and predictable policy approach of course reached its ‘heyday’ in the mid-2000s, a time during which is notably cautious tightening spectacularly failed to dampen the (global) credit boom that was forming (and which finally ended in the GFC). 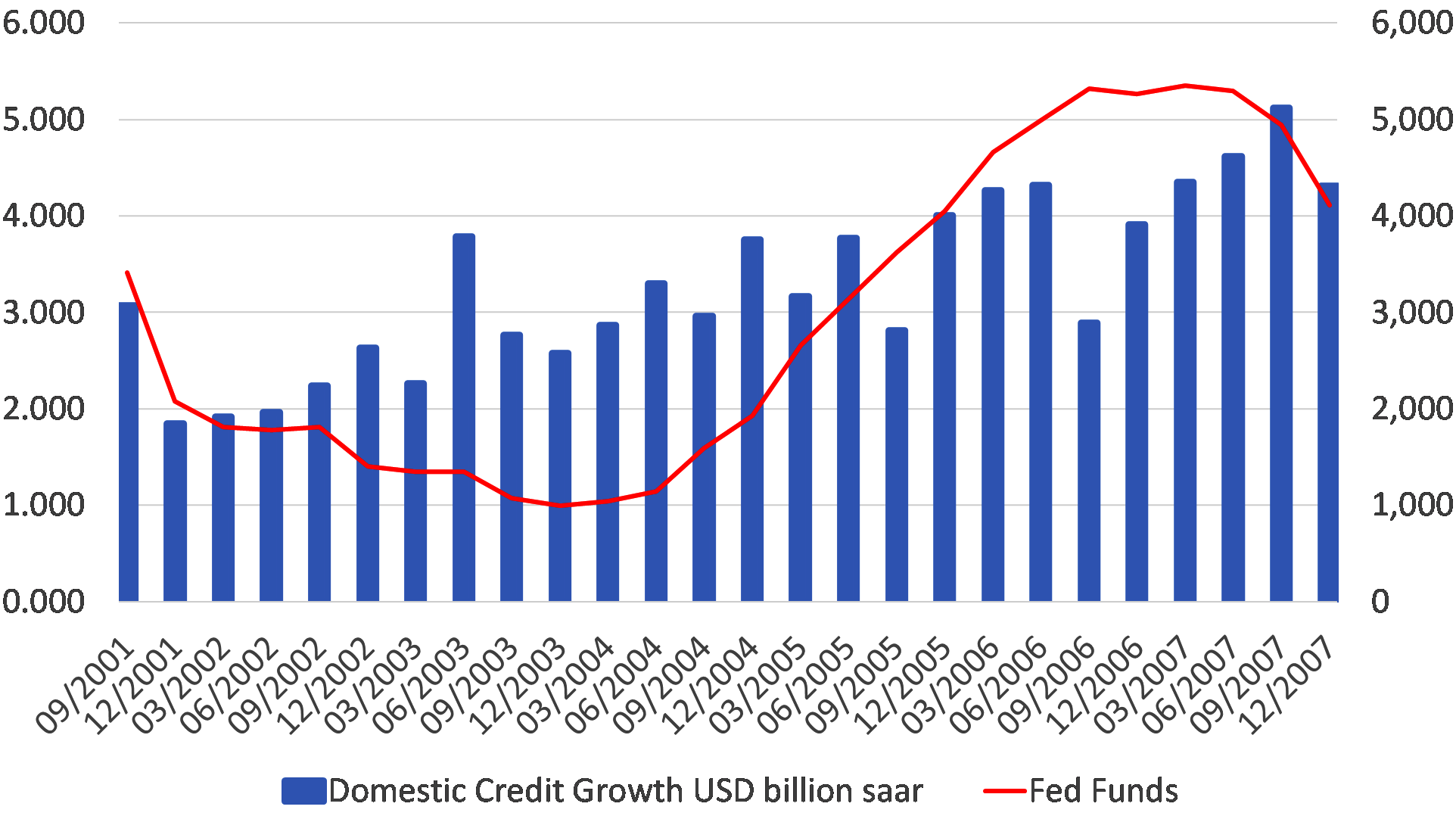 We would argue that through a mixture of his desire not to “surprise” the real economy and not to disturb financial markets, Greenspan entered into what became such a predictable tightening that everyone knew what would happen when and could budget /hedge their activities accordingly. Hence, Greenspan’s dozen baby-step rate moves in the 2000s were a lot less effective than Pohl’s 1986 – 87 or 1989-90 actions, which were both aggressive and unpredictable (and notably ‘bad’ for equity markets).

Following the Global Financial Crisis, the standard policy response from central banks was of course to lower interest rates. Purchase assets in the hope of both boosting asset prices and creating positive wealth effects (at least for those that already owned assets; affordability declined for those that did not – thereby revealing how divorced from the real world some of these policymakers had become). One does not have to resort to ‘grand conspiracy theories’ to suggest that the adoption of such policies may have been influenced by the investment banking industry backgrounds of virtually all of the major proponents of these policies.

Certainly, it seems to us that central banking in the 2010s has continued to carry the ‘baggage’ of information economics (Yellen being a particular advocate despite the regime’s spectacular failures during the 2000s), while at the same time possessing a marked degree of forbearance / encouragement of investment banking activities and booming conditions within financial markets. One obvious consequence of the predictable / low interest rate regime has been the further encouragement of Corporate Zaitech (financial engineering) in the USA. We estimate that on average over the last 60 years, the US equity market has generally provided a 3%-4% ‘cash yield’ to its owners through its dividend payments and equity buy-backs. However, we can further calculate that the level of cash disbursements by companies has shifted from representing the equivalent of 2 – 4% of GDP in the 1960s and 1970s (i.e. consistent with a stock market capitalization of around 50-60% of GDP) to around 7-8% in the 1980s LBO-craze (which Mr Powell seems to have been quite associated with…), and 11-15% in the 2010s. 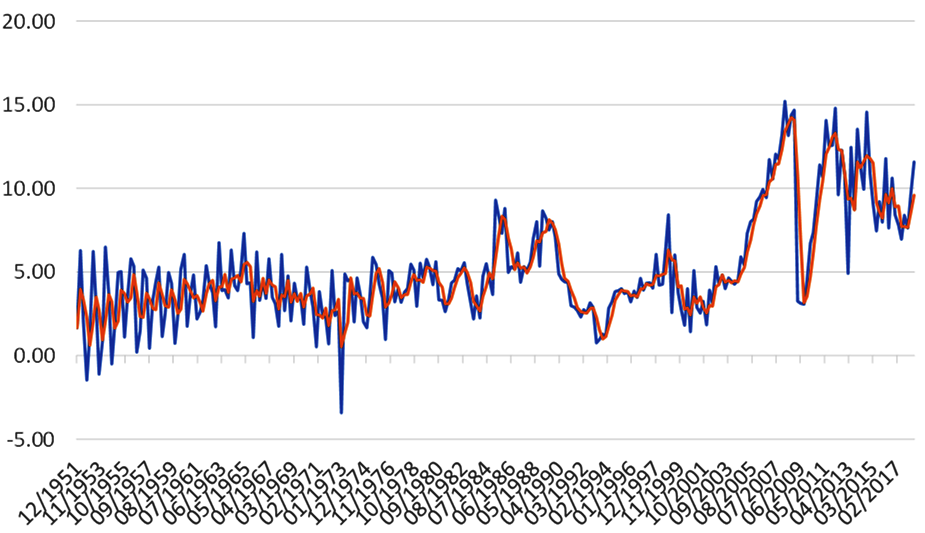 Although many equity market analysts around the world have adopted various forms of (free) cash flow analysis when looking at companies, the fact of the matter is that comparatively little of the funding for these massive disbursements of cash to shareholders by US companies has come from operating profits. Instead, the funds have been borrowed either from the corporate bond markets (particularly during the late 1990s, mid 2000s, and 2010-16) or more latterly from commercial banks. In fact, many of the required funds in 2018 have it seems been borrowed from foreign banks operating in the USA who have in turn funded their USD-lending operations by in effect borrowing surplus funds from the big US ‘money centre banks’. 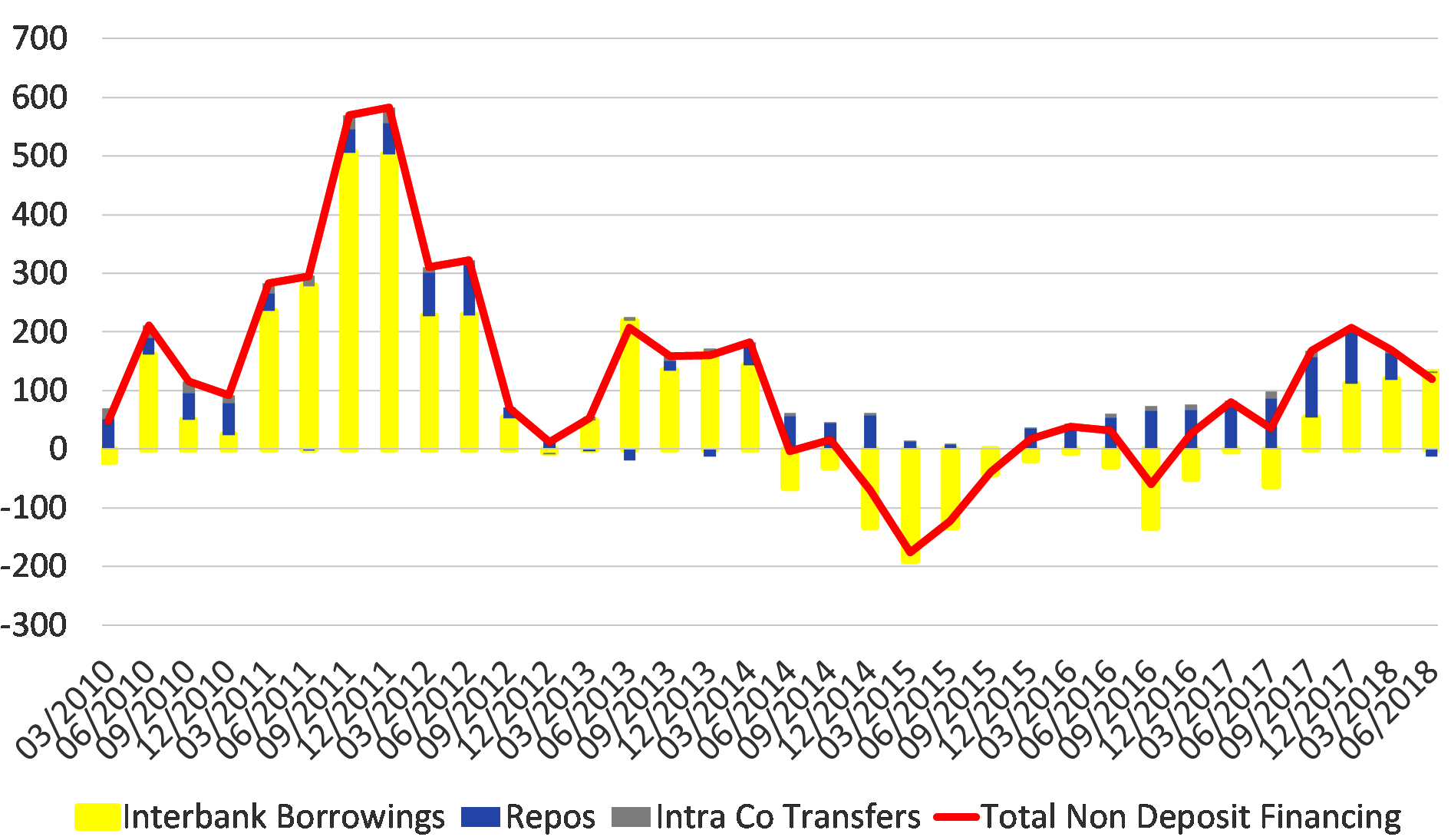 Not since the QE2 and QE3 eras had the foreign banks operating in the US faced such buoyant funding markets as they did in late 2017 and early 2018. This was of course not surprising, given that the Trump Administration during late 2017 (for reasons that are still essentially unknown) chose to provide a QE-sized boost to USD liquidity by aggressively running down its own holdings of cash at the Federal Reserve and thereby releasing them into the hands of private sector financial institutions. During 2017 many of these funds ultimately found their way into the EM (in which they caused a USD credit boom) but roughly a quarter of the Treasury’s net injection of funds seem to have found their way into the hands of foreign banks operating in the USA who in turn lent them to companies so that the latter could fund an increased level of zaitech. In light of these developments, it is not surprising that US equities were performing so well until recently.

However, over recent weeks, we sense that the world of central banking has changed in a number of often technical but potentially important ways. For example, Powell seems to be contemplating breaking with the Greenspan – Yellen “slow and predictable” doctrine and, despite his earlier career, he seems somewhat less market focussed than his immediate predecessors.

At the same time, the US economy has itself started to produce somewhat confusing data – there are some signs of a slowdown in the real economy (that may or may not be valid, we suspect not) and there have been more concrete signs of inflation. Markets may even be concluding that even if the US economy slows, it may remain overheated and therefore requiring of higher rates, an unwelcome prospect.

To make matters worse for markets, there is the added complication of whether the FOMC will tighten via ‘price alone’ (i.e. just by raising interest rates) or whether through both price and an acceleration in its Quantitative Tightening. At present, the Fed seems to have become remarkably tight-lipped on the subject of whether QT will be accelerated or abandoned but we would argue that if the Fed does embark on further QT, then the squeeze on wholesale USD liquidity that began in 2018Q2 (something that has already been felt for the foreign banks in the USA that we referred to earlier – see the chart above) will intensify and the likely result of this will be a dearth of credit available to companies (and the EM) at any price.

Certainly, any expansion of QT would represent a very real threat to the sustainability of the corporate sector’s zaitech activities. It would be difficult to imagine a situation that was further removed from Greenspan’s market-friendly slow and steady soft tightening strategies…. To make matters worse, we find that somewhat against our expectations, the US Treasury has been reversing last year’s injections of funds into the financial system by rebuilding its own holdings of deposits. We, and we suspect others that follow this data, had been expecting the administration to inject funds ahead of the mid-term elections but it seems to have done the reverse, and thereby created not just a potential shortage of liquidity in the system but also some ‘consternation’. Adding to the increased confusion in markets are events in China. Although China’s own economic data may be giving mixed signals, it is clear that many things that are within China’s ‘gravitational sphere’ is beginning to feel quite recession-like – or even stagflation-like. This was clearly not what markets or most policymakers were anticipating even a few months ago.

Elsewhere, we find that although the Bank of Japan had been signalling to its visitors that it would seek to wind down its own QE, and allow yields to move higher this quarter, it now seems that global events seem to have resulted in these plans being delayed, while in Europe the ECB seems to be flip-flopping on the subject of a further tightening depending on the audience it is facing at that particular moment.

In our view, the ECB needs to raise rates and / or begin QT for the benefit of the economy (i.e. rates are currently too low for the private sector) but the ECB and Europe’s governments simply cannot afford to tighten. Given this ‘morass’ that the ECB has created, it is no wonder that markets have become less certain of what the central bank is likely to do. Finally, we note that in the UK the banking system has been both selling bonds that it previously owned and issuing long term bonds of its own, actions that other things being equal will have resulted in a tightening in effective liquidity conditions within the system.

At present, some of these concepts are still quite nebulous but increasingly it does seem that the number of unknown unknows, or unknowable factors facing markets are beginning to increase. By design or otherwise, central banks are becoming less predictable and as a result borrowing costs – and potentially even the supply of credit are becoming much less certain than they have been since perhaps the 1980s. As a result, the outlook for zaitech, for the ability of the perennially cash flow negative EM and others to fund themselves is becoming much less certain and it is for this reason that we suspect that the recent ‘discomfort’ in financial markets will indeed continue over the medium term, although in the short term we must wonder whether the Administration will offer one last liquidity injection before year end that provides some short term relief to markets.