Italy: A bigger threat than Brexit?

Although Italy possesses a useful and not insignificant visible trade surplus, the country is nevertheless continuing to suffer from persistent and we might suggest remarkably large capital account deficits as its domestic savers by and large continue to shun the local asset markets

All other countries
by Andrew Hunt, International Economist
31 May, 2018

Although Italy possesses a useful and not insignificant visible trade surplus, the country is nevertheless continuing to suffer from persistent and we might suggest remarkably large capital account deficits as its domestic savers by and large continue to shun the local asset markets. In fact, we estimate that Italy is currently suffering an annual capital account deficit that is the equivalent of 15% of its annual GDP. Much smaller deficits have frequently caused currency crises – Thailand’s deficits in 1997 were half this amount on a relative basis and Mexico’s deficit in 1994 was smaller still. 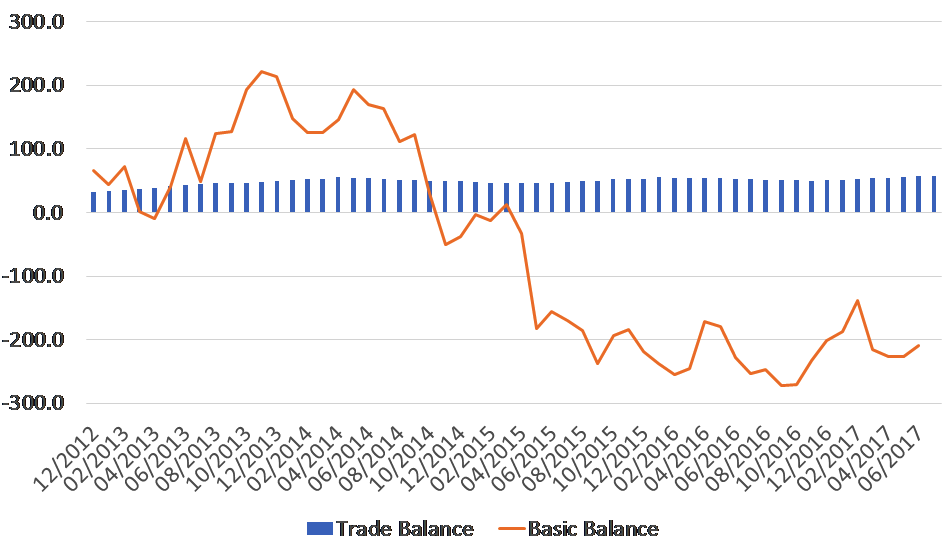 Perhaps the strangest feature surrounding Italy’s persistent capital account deficits is that it is not spoken about very frequently – we suspect that many viewing the chart above may even do so with an air of disbelief given the radio silence that surrounds the issue. Some may even doubt the data, although it is derived from the IMF’s published official sources. Moreover, there is corroborating evidence to be found within Italy’s own domestic data.

According to Italy’s own flow of funds data, which it must be noted is derived entirely separately from the data used within the balance of payments chart, Italian households last year acquired a total of EUR11 billion of financial assets on a net basis and EUR34 billion on a gross basis. Of these asset acquisitions, fully EUR26 billion took the form of foreign assets, a significant amount even before one considers the further EUR77 billion of foreign assets that were acquired by Italy’s pension funds, insurance companies, financial intermediaries, banks and even non-financial companies. Foreigners, meanwhile, acquired EUR22 billion of Italian equities last year - a useful sum - but they also sold EUR45 billion of bonds. Many of the latter were presumably sold to the Bank of Italy as part of the ECB’s Quantitative Easing. It does rather seem that the Euro Zone QE has been providing the liquidity for foreign investors to leave their bond positions at attractive prices.

In short, Italy’s balance of payments data, its monetary data and its flow of funds data each point to the continued existence of a huge underlying deficit in the country’s balance of payments. Of course, in a sense, it can be argued that this deficit has not mattered (even within the determination of local yields) simply because Europe’s banking flows settlement system, which is known as TARGET2, has provided infinite amounts of long duration (i.e. notionally infinite) credit at zero or lower interest rates. Hence, the world has been able to ignore the problem (a tactic of course encouraged by the ECB). 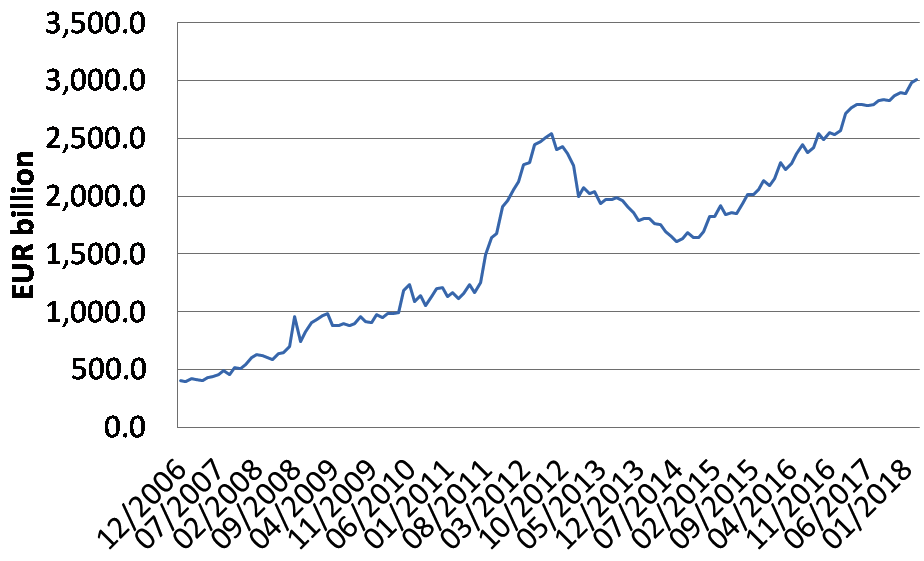 As ever, the ECB’s ‘off-balance sheet’ TARGET2 credit system has been the glue that has held the EZ together by providing almost infinite amounts of long duration credit to anyone within the system that needs it. Although TARGET2 is usually referred to as a settlement system, there is in fact no settlement date implying that it is in fact a credit system that forces creditor banks to lend to debtor banks at negative interest rates for ‘as long as the debtors require the funds’.

This month, however, there have been calls within Northern Europe (i.e. from Germany’s influential IFO Institute) to curtail Italy’s future ability to borrow from TARGET2 if its newly elected and rather colourful coalition government were to succeed in going ahead with its anti-austerity / anti- (wage) deflation budget (despite the Italian President’s rather extreme attempt at suppressing democracy over recent days). We regard this as representing an almost entirely hollow threat..

If any suspension of Italy’s access to TARGET2 borrowing facilities were to imply that Italy could no longer rollover its existing debts, then the results would be instantaneously catastrophic for the Region as a whole.

Rather disingenuously, the ECB notes that the rest of the Euro Zone possesses aggregate TARGET2 claims on Italy of some EUR450 billion, clearly a large sum. However, this amount is in fact Italy’s net borrowing from TARGET2 (Italy has some claims on its EUR partners of its own) and we suspect that Italy’s gross borrowings are probably well in excess of EUR500 billion (i.e. around 20%- 25% of the aggregate TARGET2 clearing balance). Were Italy’s critics and creditors to demand repayment of such a massive sum, which would amount to imposing a settlement period on a system that hitherto has not possessed such a novel concept, then the Italian balance of payments deficit would soar to an impossible 50% of GDP and, within a very short space of time (hours!), we suspect that Italy would quickly default on its TARGET2 liabilities, leaving behind it a write-off for the creditors that would be equivalent to probably 5% of Euro Zone GDP.

These costs, plus many of those that might arise from any subsequent financial market turmoil, would most likely have to be met by the EU governments (EU not EUR – the ECB is in fact owned by the EU states not merely the EZ countries). At this point, we suspect that Pan European cooperation might well become a thing of the past.

Potentially, Italy could ‘merely’ be refused access to new credit lines (although the mechanics of this might be difficult). However, this would still leave the country facing a settlement date and hence an unfinanced balance of payments deficit of circa 10% of GDP, a situation that would likely put intense upward pressure on Italian bond yields, an implicit increase in internal deflationary pressures, and most probably a politically driven swift exit from the EUR. At this point, the TARGET2 stock issue, with all that this would entail, would of course emerge.

Quite simply, if the Core countries were to deny Italy access to TARGET2 in any way, and in effect introduce the notion of a settlement period to the TARGET2 system, then they would likely sow the seeds of the single currency’s own destruction (for better or for worse). We therefore suspect that, while they may wish to continue to indulge in some sabre-rattling, the other governments will ultimately prove to be paper tigers when it comes to actually doing anything..

However, we do fear that such a strategy of impotent ‘disapproval’ will not be without its costs. Northern Europe’s population is ageing rapidly and understandably concerned over the outlook for inflation over the longer-term and its likely impact on prospective real living standards in their retirements. Indeed, we suspect that one of the primary drivers behind last year’s very sharp increase in the German household sector’s savings rate was the ‘collapse’ in their implied expectations for real interest rates. 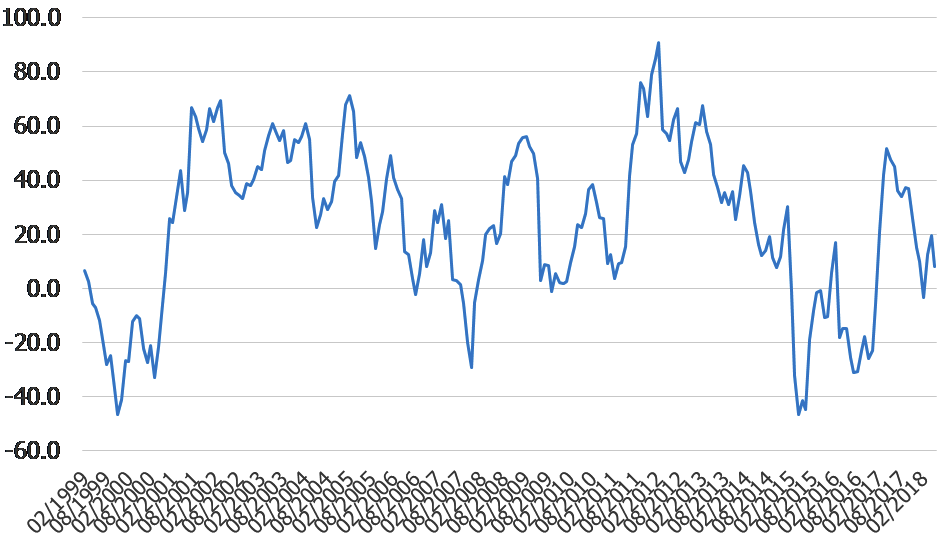 If the Italian government does indeed succeed in ignoring the Euro Zone Stability Pact, then it will presumably provide a stimulus to its own domestic financial conditions and presumably to domestic demand trends. However, easier domestic conditions will likely lead to a further deterioration in Italy’s balance of payments position (as the country imports more goods but potentially exports even more capital). This would of course explicitly increase the country’s dependence on TARGET2 funding, the source of which would however be the higher savings being generated in the North in response to the sense that European monetary stability was breaking down.

To add insult to injury, under this scenario the Core banks would likely find themselves continuing to intermediate these savings from the North to the South at either negative or very narrow margins, a situation that will do nothing to improve their already weak capital positions. The situation would not be without its irony, but one can see the potential attractiveness of the ‘game’ for Italy’s new government. Indeed, if all went according to our narrative above, then one could argue that Italy’s ‘populist government’ would have triumphed over Europe’s conservatives (something that would doubtless encourage others to follow suit...)

Twenty years ago, we opined that the Euro System would only survive if it possessed an inflationary bias that Germany felt unwilling or unable to challenge politically. Today, we see no reason to alter this view and Italy’s astute gaming of the realities of the EZ look set to test this hypothesis – Italy seems to be intent on making the EUR more akin to the ITL than the DEM, and it will be up to Germany’s body politic to decide whether they can resist this process in pursuit of longer term financial stability – albeit at the potentially massive short-term costs if the EUR were to break.

As it stands, if Italy’s government presses ahead with its plans to end austerity and pursue faster rates of nominal growth, it will leave the Core countries with a simple choice: abandon the Euro Project with all that this might entail in the short term (although it might be positive in the longer run), or turn a blind / impotent eye to what Italy is doing and accept that the EZ will shift towards a soft currency regime in which the driving force for growth comes from consumption trends in the South.