The implications of a surprising decline in non-manufacturers’ profit margin.
Share this

All other countries
Download as PDF
by John Vail, Chief Global Strategist
04 December, 2017

Last night’s release of the third quarter data on aggregate Japanese corporate profits showed a partial pause in our long-term theme about improving corporate governance. The overall corporate pre-tax profit margin remained at its record highs (nearly double the level of the 1989 bubble period), but that for non-financials mysteriously sank. 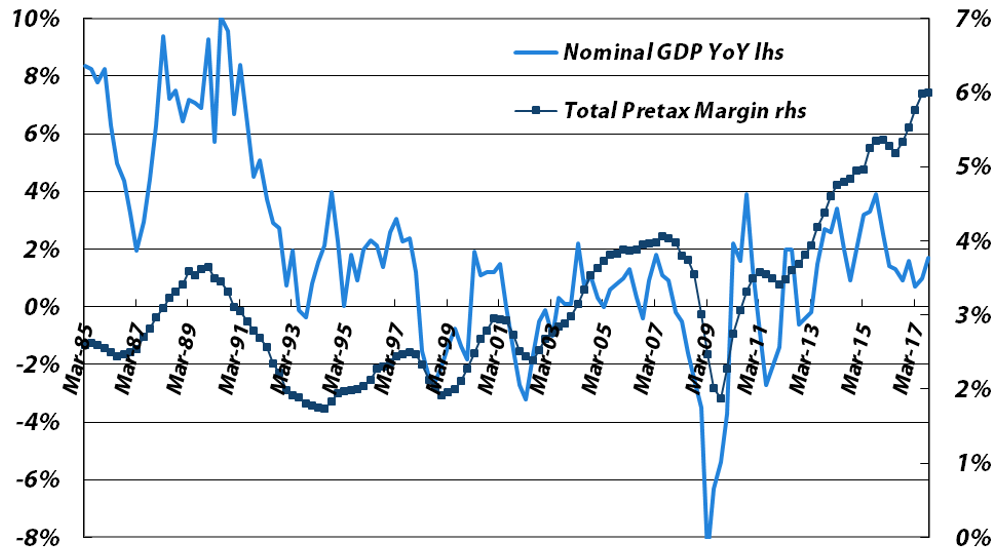 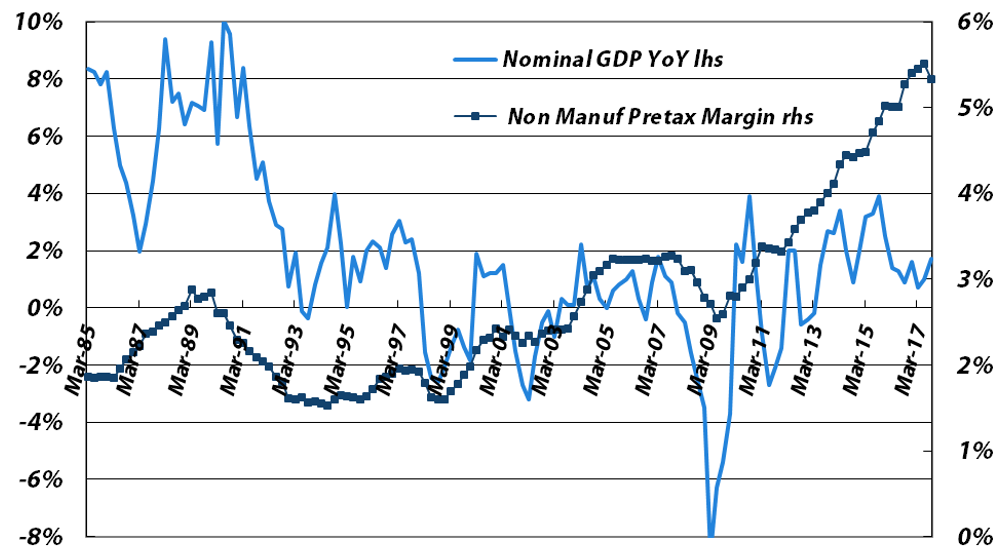 The latter fact is noteworthy, as it has not occurred since the Lehman shock. It is all the more surprising because the recent earnings season was very good, even for non-manufacturers. That said, this data covers unlisted firms, which may be suffering from higher labour costs and shortages of labour inputs, and non-manufacturers are more labour-intensive than manufacturers. Notably, however, small non-manufacturers did not suffer any more than large ones and for all sizes, on a four quarter average, non-manufacturers’ profits continued to rise YoY. Also, another positive note is that the high overall profit margin indicates that manufacturers expanded profit margins dramatically in the quarter.

The overall theme of the "Show Me the Money" corporate governance improvement that I have long-highlighted on Japan remains intact and that the profitability message has actually been understood by most Japanese corporates for over a decade. This is shown by the divergence in the profit margins from the GDP growth trend in the charts above, showing that even though GDP growth has remained subdued, profit margins have surged. Since the early 2000s, Japan has embarked on major rationalizations in most industries, with the number of players usually reduced from seven down to three or four. The fruits of this restructuring were slower to ripen than in Western world examples, and they were hidden by a series of crises (the Global Financial Crisis of 2008-2009, the strong Yen period of 2009-2012, the 2011 severe Thai floods that halted a large amount of auto and electronics production, several periods of political turbulence with China that included boycotting many Japanese goods and, of course, the tsunami/nuclear crisis of 2011), but since Abenomics began, the global backdrop for Japan has been stable and there have been no domestic crises, thus allowing these fruits to ripen.

One should also note that the Ministry of Finance statistics cited in this report do not cover post-tax income, and due to recent corporate tax cuts, the overall net profit margin (excluding extraordinary write-offs) has expanded even more sharply than the pre-tax data shown above, thus “showing the money” to shareholders to a very large degree through dividends and share buybacks. In my view, Japan is the only major country that is going through a structural improvement in corporate governance, and, thus, deserves special attention by global investors. After its stock market’s recent outperformance, any lack of such attention has been painful and could well become even more so.

Prior to joining Nikko AM in 2006, John was Chief Japanese Equity Strategist for JP Morgan Securities Japan from 2004, and Chief Strategist at Mizuho Securities USA from 2000. John also held various senior research and strategy positions at Fidelity from 1985 to 1992, based in Hong Kong, Taiwan and Japan. He also covered pan-Asia equities at his own firm, Asia House Funds, for five years from 1993.