When price and value diverge

The economics profession has always struggled to define the notion of value – and not only within the narrow context of the financial markets!
Share this

All other countries
by Andrew Hunt, International Economist
01 November, 2017

The economics profession has always struggled to define the notion of value – and not only within the narrow context of the financial markets! For our part, we have always favoured Adam Smith’s relatively simple ’value identity’, namely that the ‘value’ of an item should be equal to the weighted sum of its labour, commodity and land, and capital inputs, not least because we believe that it is this simple construct that can explain much of what has happened to the structure of many economies around the world over the last few decades – including New Zealand. 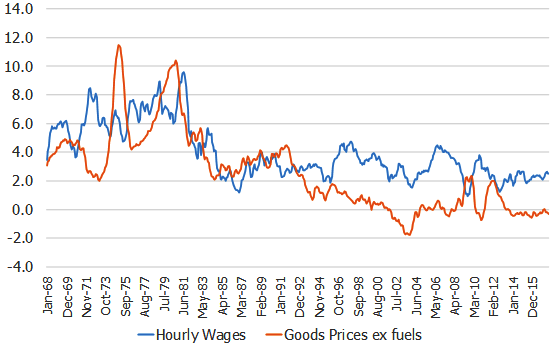 The situation has been a little different within New Zealand by virtue of the impact of its commodity producing sectors. Here, we find that average wages have risen relative to both service sector prices and goods prices, thereby implying that there has been effective growth in average real wages. However, while we suspect that the increase in wages relative to service sector output prices was more-or-less ‘covered’ by even the modest rate of productivity growth that has been observed in these sectors, we can assume that the increase in manufacturing wages that has occurred since 1996 must have pressured margins within the traded goods sectors.

Another key component of the Smith value identity includes property costs and we would argue that property prices are an integral part of the cost of doing business in any economy through a variety of direct routes (the cost of buying or renting premises), or indirectly via their impact on wage bargaining trends.

Although it is difficult to obtain a time series of commercial property prices, it does appear that New Zealand’s unit property costs are up by around 80% or so despite the modest rate of output price inflation that has occurred within the goods producing sectors. Meanwhile, the increase in the relative increase in commodity input prices relative to output prices has been less severe and may even have been negated by technological change and improved efficiency. Commodity prices were very elevated relative to output prices in much of the world during the mid and late 2000s but the data has moderated since then.

Overall, it is abundantly clear that price trends within both the wage and property prices have contributed to a margin squeeze at the prevailing level of prices or, to put in Smith’s terms, the value of a commodity has begun to exceed the price that one would gain from selling it. Hence, we should not be surprised to find that profits in the traded goods producing sectors have been under pressure, that the level of industrial production in New Zealand and elsewhere has barely increased over the last 20 years, and that employment within the sector has declined very sharply, with significant effects on the regional economies, wealth equality and voter attitudes. In the ‘perfect market’ profit-maximizing free competition world, it should not have been possible for production costs to have diverged from selling prices over the longer term. If prices are too low, then the volume of supply should decline until prices rise back to an equilibrium level, or vice versa. However, the problem for the West is that, following the trend towards what has been referred to as globalization, the prices of goods have tended to become ‘international prices’ and as such they have tended to deflate over the last 20 – 25 years. It is of course this deflation of imported and traded goods prices that has caused values and prices to diverge so drastically in the West.

The standard and readily accepted explanation for the generalized deflation of traded goods prices within the global economy has been the emergence of China as a cheap labour / high productivity growth economy. Certainly, we suspect that wages in China were indeed very cheap in the late 1980s and early 1990s and productivity growth has indeed been relatively bright, at least until recently. However, the actual wage and output numbers for China since 2005 (i.e. since the economy’s full accession to the WTO) make for interesting reading: over the last eleven years China’s average wages have more than trebled while its received export prices have fallen by a quarter. In order for improved productivity to have bridged this gap, we would have need to have witnessed rates of productivity growth between 25%-35% per annum. These are unlikely.

Had China emerged as a ‘super-competitive’ profit-maximizing traded partner, we would have no trouble in believing that it was efficient for the West to surrender significant parts of its manufacturing sector to North Asia but the obvious and in absolute terms clearly massive dependency of many North Asian economies of state-subsidized credit suggests to us (along with casual observation) that the North Asian economies were not in fact producing efficiently.

Crucially, we believe that it has been this collision between the Western and Eastern economic systems that is giving rises to the structural economic problems – and more ‘surprising’ political environment - that we are now witnessing on a regular basis. Moreover, we view the financial market, real economic and even political outlook for the next 10 – 20 years as being likely to be the result of just how the ‘tension’ that exists between the West’s notionally profit-maximizing model and China’s / North Asia’s alternative output / employment-maximizing strategy is resolved.

Acting unilaterally, we can assume that the West will only be able to achieve a form of economic and even social equilibrium if the ‘value’ of production falls through exogenous productivity gains (or property price deflation), or the price received for the goods that it sells rises, perhaps via a ’competitive devaluation’. In fact, we might argue that for NZ, the latter may become the default outcome.

Higher global goods prices could however be achieved by attempting to exclude North Asia from the WTO or imposing ‘second-best’ economic efficiency tariffs on imports from the Region but we suspect that to do so in the context of the real world would likely result in tit-for-tat trade wars and of course this would result in a decline in real incomes in the West.

A better solution would be to encourage North Asia to change its model and to embrace more de-regulation, less financial repression and less state interventionism. This process has indeed begun in Japan and more recently Korea and the result has been higher corporate profits and higher export prices. China may also be moving towards this path, if only because it may be reaching the limits of growth within its banking system (if the banks can no longer subsidize the corporate sector, then the latter will be required to conduct less CAPEX and charge profit-maximizing prices for its wares).

Finally, there could be an economic crisis in China. It is quite feasible that the government’s heightened financial repression will generate a sharp decline in the willingness of China’s population to hold their savings in RMB deposits. Were such a drop in the demand for money to occur then, then domestic savers would ‘dump’ their deposits in favour of goods and more extreme ‘alternative stores of value’. Under this seemingly extreme but not impossible scenario, China’s rate of nominal growth would accelerate sharply as inflation rates increased. At this point, we would assume that the domestic inflation would leak out into the country’s export prices, and provide a sharp and in all probability inflationary boost to global trade trends in general. Ultimately, such a crisis might also degrade China’s ability to supply goods – high inflation economies frequently suffer declining levels of real output.

It must be noted that each of the scenarios described above would likely result in a rise in world trade prices that would boost Western producers but, unfortunately, the rise in output prices would erode real incomes and likely create a stagflationary environment in the near term that would be far from bond market – and equity market valuation friendly.

Clearly, this is not a ‘next three months’ forecast for the global economy but we do believe that many of the issues raised will shape the global investment outlook over the next 10 – 20 years. At its base level, the report concludes that the Western economies are unlikely to be able to return to some form of economic, social and political equilibrium unless the imbalance between selling prices and production values is corrected.

Therefore, unless the West radically improves the productivity of its labour and land resources, any return to equilibrium will involve higher rates of goods price inflation that will likely lead to higher generalized rates of general inflation and to (further) pressure on personal real incomes in the short term. The required rise in world trade prices could be achieved via protectionism, a sharp rise in domestic inflation rates in China, or more positively through long overdue economic reform in North Asia. All of the above will, however, represent challenging news for the bond markets.