Note From A Big Country

Perhaps the biggest surprise that emanated from this week’s trip to North America has been the extent to which the topic of secular stagnation has come back onto the agenda, despite all the excitement over the prospect for as yet unfortunately still undefined tax cuts by the Trump Administration.
Share this

All other countries
by Andrew Hunt, International Economist
02 October, 2017

Perhaps the biggest surprise that emanated from this week’s trip to North America has been the extent to which the topic of secular stagnation has come back onto the agenda, despite all the excitement over the prospect for as yet unfortunately still undefined tax cuts by the Trump Administration. Previously, when market participants had considered the presumed slowdown in trend growth (which admittedly was not that often in most cases…) it was generally couched in terms of the presumed effects of excessive regulation, unfair foreign competition or the result of simple miss-measurement of the economy.

On this latest trip, we observed that the notion there still being too much regulation was definitely still very much a theme, particularly with regard to Healthcare and within the financial sector. The thorny issue of foreign competition obviously still exercises the collective mind of politicians – witness the now widely expected breakdown in the NAFTA talks – but we found less discussion of this hypothesis within the private sector, presumably because import prices have been rising of late.

Finally, although even six months ago the notion that the digital economy was producing more than was being measured by the statisticians (and that there therefore was not a stagnation occurring) was still a remarkably popular viewpoint, on this trip we heard little talk of this supposed problem. The consensus seems to be coming to appreciate that whatever the New Economy does do, it does not seem to produce profits or income growth. In fact, parts of the new economy are increasingly being viewed as being the ‘Bad Guys’ in the secular stagnation story.

More specifically, it seems to be becoming more widely recognized that the increasing concentration of economic – and equally importantly financial - power within a relatively small number of ‘new mega companies’ is indeed becoming detrimental to the outlook for the economy in general. We had previously viewed such a theory as being decidedly ‘alternative’ and limited to only a relative few cynical analysts such as ourselves but this seems no longer to be the case.

Indeed, we had half expected to be ‘struck down’ by the proverbial lightning bolt this week for suggesting in our presentations that a certain on-line retailer’s business model of selling goods cheaply so as to maximize output but to not pay attention to profits (witness the Wholefoods takeover) looked remarkably like the business model of a China SOE, or even an ‘old-style’ Japanese Ziabatsu or Korean Chaebol, but instead we found a strangely receptive audience to such views in several sectors. At times, it seemed that we needed to emphasize that the on-line retailers were not in fact ‘agents’ of some less than benign foreign power!

In a decidedly new but increasingly popular take on the state of the US economy, we heard the world’s favourite on-line retailer described by one client (who best remain nameless) as being an old-style Land Grab company that was abusing its ability to raise capital (both debt and equity) in order to expand its market share for its own sake, regardless of its lack of profitability and to the clear detriment of others. Certainly, there was much discussion of just what the company’s real motives were – was it profit maximization or scale for scale’s sake? Another client described the company as being simply the result of a ‘bad case of resource miss-allocation’ that has itself been caused by artificially depressed interest rates.

A more guarded description suggested (as we have done) that the companies that have led the equity markets’ rally this year as being likely to have higher savings rates than more typical companies and that this situation could be damaging aggregate CAPEX trends. Since the mega companies in effect ‘own’ the bulk of the corporate sector’s current financial surplus, and apparently have better access to the capital markets than many others, they have amassed simply huge cash balances and resources that they simply cannot spend for what might well be described as almost ‘practical reasons’. Certainly, there does seem to be a rather significant divergence between the ‘cash flow’ performance of the US’s mega companies and their smaller brethren, who might be more inclined to invest all of their surpluses.. 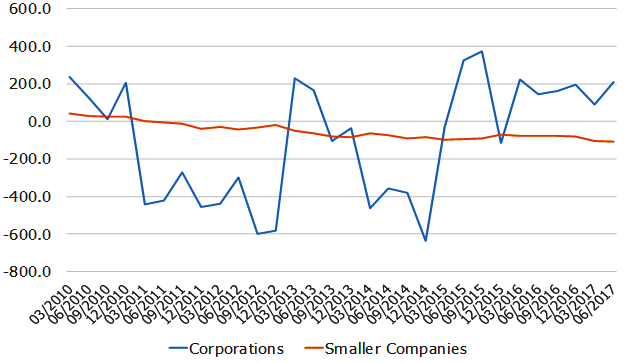 History and mythology is of course littered with stories and parables of the evils and harm that can be caused by excessive hoarding (with good reason) and if it is the case that the mega companies are indeed hoarding, then it might well help to explain why capital expenditure trends have refused to perk up despite the markets’ perennial hopes for such a recovery.

We might also suggest that if some of the equity market’s darlings are not in fact profit-maximizing (a not unreasonable hypothesis given the performance of the retail sector’s profit data over recent months), and that they are instead exploiting their ability to raise capital in order to subsidize their selling prices, then this will clearly be dissuading investment spending by their competitors and even those others that are being adversely affected by the companies’ presumed divergence from the accepted economic model of corporate behaviour. Certainly, profit growth within the retail complex seems notably weak, despite the fact that even this data was lifted in 2017Q2 by an upward revaluation of the value of existing inventories. This situation will have done little to support CAPEX within the wider economy.

In some meetings, there was also talk of a possible ‘monopoly power’ within the labour markets that was impacting the wage data but we have a little less sympathy with this concept, instead preferring to blame the lack of real wage growth in the lack of real productivity growth.

Nevertheless, we clearly have some sympathy with the general thrust of some of these views: in previous reviews we have touched on the savings rate and land grab issues but we were more surprised to hear of the growing acceptance of the notion that the current increase in economic concentration could be attributed to the effects of the capital miss-allocations that have arisen as a result of the authorities’ over-long use of financial repression and ultra-low interest rates. While we might dispute the assertion that all of these companies are products of resource miss-allocation, we do nevertheless suspect that the concentration of economic power – and in particular their pricing power – may be beginning to hold back the wider economy..

Moreover, we have long been of the view that the Northern Hemisphere’s over-use of QE Policies and the like has allowed too many zombies to remain walking in the corporate sector, it has made it too easy for the state to expand its role in people’s economic lives in Europe, and it has corrupted the US’s economic structure away from any pretense at being ‘perfect markets’. This situation, we believe, will have undermined economic efficiency but what is more surprising is that we are increasingly finding that such views are becoming very much more widely held.

Ultimately, the conclusion that we must therefore draw from our trip is that, as the general consciousness increasingly comes to the conclusion that a relatively small number of companies do not only have considerable control over the fate of the wider economy but that this situation is potentially harmful, and that the central banks’ accommodative strategies are doing demonstrable harm, then the population and their politicians will start to push for the type of change that the populist politicians have pledged to create. Consequently, it seems increasingly likely that some form of modified Anti-Trust Policy-type move against the US’s mega companies must be on the cards, not just in Europe (who we suspect simply sees them as a threat to the incumbent body politic / potential cash cows) but in their home country as well. Consequently, we fear that over the medium term, the consensus of opinion within the markets is likely to turn against the current darlings of the markets that have provided most of the recent equity market returns.