All other countries
Download as PDF
by Junichi Takayama, Investment Director
19 September, 2017

Question not “to spend or not to spend”, but rather “how to spend”

As of March 2017, Japanese companies, excluding banks and insurance companies, collectively held a record-high JPY 189 trillion (approximately USD 1.7 trillion) in cash and cash equivalents on their balance sheets (Exhibit 1). This large accumulation is seen as the result of companies building up their cash reserves in the aftermath of the global financial crisis (as a precaution against another such crisis), and of the corporate earnings recovery that followed policy support from governments and central banks around the world. The latter includes, of course, the “Abenomics” economic growth policies adopted by the government in Japan. 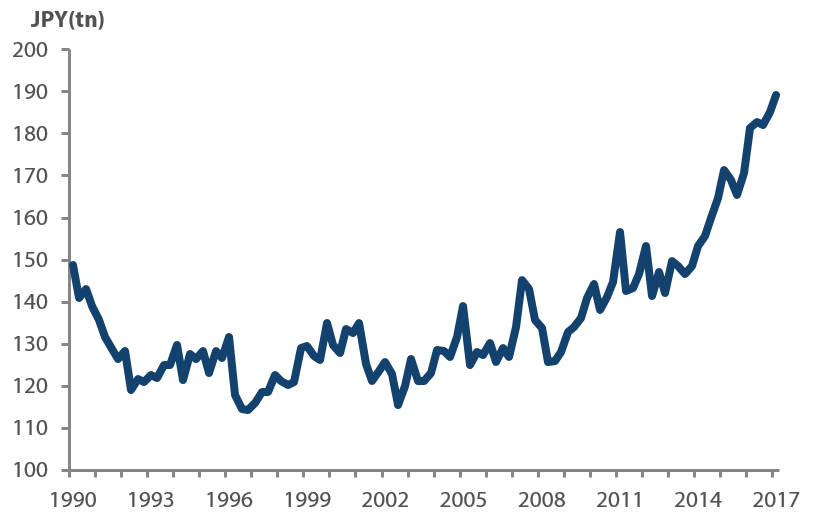 While companies need to hold a certain amount of cash for operational or financial risk management reasons, having too much cash on the balance sheet can be detrimental to shareholders as it results in lower efficiency of invested capital.

Firms holding too much cash is even considered by many to be negative for the broader economy. In July, Japan Finance Minister Taro Aso commented at the Japan Business Federation’s summer forum that “the public is not happy to see businesses hoarding cash, especially after they recently benefitted from corporate tax cuts.”

This doesn’t mean that companies are not making any effort to use their cash. In fact, over the years, many firms have been boosting shareholder distributions, hiking dividends and increasing buybacks in an effort to raise their capital efficiency and satisfy shareholders who are increasingly becoming more vocal amid on-going government-initiated corporate governance reforms.

However, in theory, returning cash to shareholders is the last thing companies should do if corporate managers believe that there are other investment opportunities that can create value for their firms.

One area in which companies have been increasingly using cash is mergers and acquisitions (M&As).

In 2016, the Japanese M&A market totaled JPY 16.7 trillion (approximately USD 143.2 billion)—the second-highest annual amount ever—with 2,652 transactions completed (excluding those within corporate groups). While M&A-related news tends to be dominated by megadeals in the technology or financial sectors due to the impact they have on global markets, the number of smaller size deals are also on the rise, indicating a broad market trend.

“In-Out” M&As, where Japanese firms acquire companies overseas, are currently a growing segment of the M&A market in Japan (Exhibit 2). According to Nikkei (citing Recof Corporation data), during the first half of 2017, Japanese corporate M&A activity in the overseas market was brisk, with transactions reaching JPY 3.7 trillion (approximately USD 32.9 billion), up 96% on year. In total during the half there were 312 such transactions, up 2% on year and reaching an all-time high. 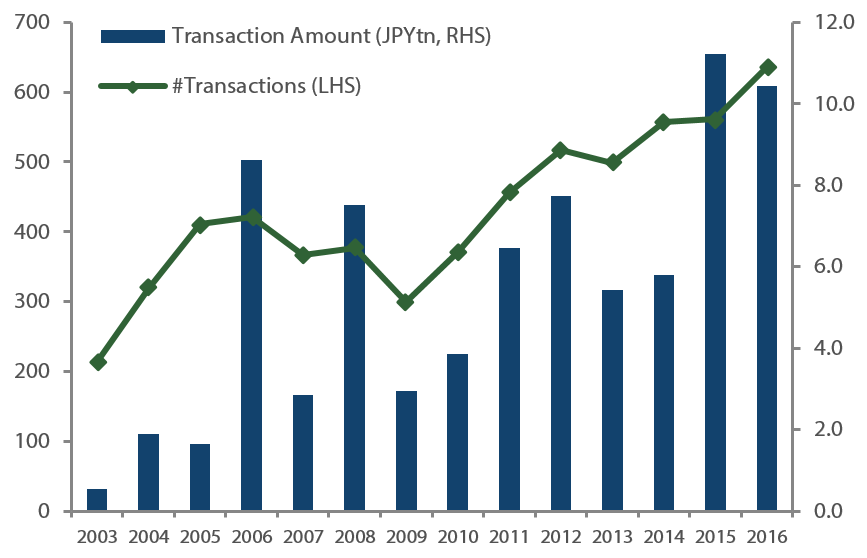 These transactions took place across a broad range of sectors such as housing, beverages, agrichemicals, glass, machinery and IT services. The primary aim of such transactions is to accelerate growth through geographic expansion. At the same time, medium size transactions tend to be driven more specifically by a goal of acquiring technology or distribution channels in developed markets. Regardless of the type of transaction, there is an increasing number of companies in Japan that are announcing amounts to be allocated for future M&As.

Creating value from the reallocation of capital

M&As are also being used as a strategic option to restructure companies’ business portfolios. Such transactions have been receiving government policy support.

Several changes included in the government’s 2017 tax reform are expected to boost M&A activity. One such change allows companies that undertake spin-offs to carry forward any gains associated with the related transfer of assets (subject to certain conditions). This should result in an increase in spin-offs by companies that aim to use the M&A market to rebalance their business portfolios. This is also happening amid a trend of companies disposing of cross-shareholdings to re-allocate capital to growth areas.

As explained above, Japanese companies are expanding overseas through M&A activity, and they are also expanding through organic growth. According to Mitsubishi Morgan Stanley Securities, while Japanese companies saw exports of JPY 70.4 trillion (approximately USD 695.2 billion) between October 2015 and September 2016, Japan firms’ local entities posted revenues of JPY 118.2 trillion (approximately USD 1.2 trillion) during the same period. Firms have been shifting production overseas over a period of many years, and such production now accounts for around 25% in Japan’s manufacturing sector. As a result, earnings are not as sensitive to currency movements as they once were.

Therefore investing in Japan, which as a country is thought of as having demographic issues that hinder economic growth, is not the same as investing in Japanese companies, given the increase in their overseas exposure.

As it appears that the first round of the “Abenomics” growth policies is winding down, and that Japan’s newly reshuffled cabinet is refocusing on the economy, we believe it is a good time to revisit opportunities in Japanese companies. 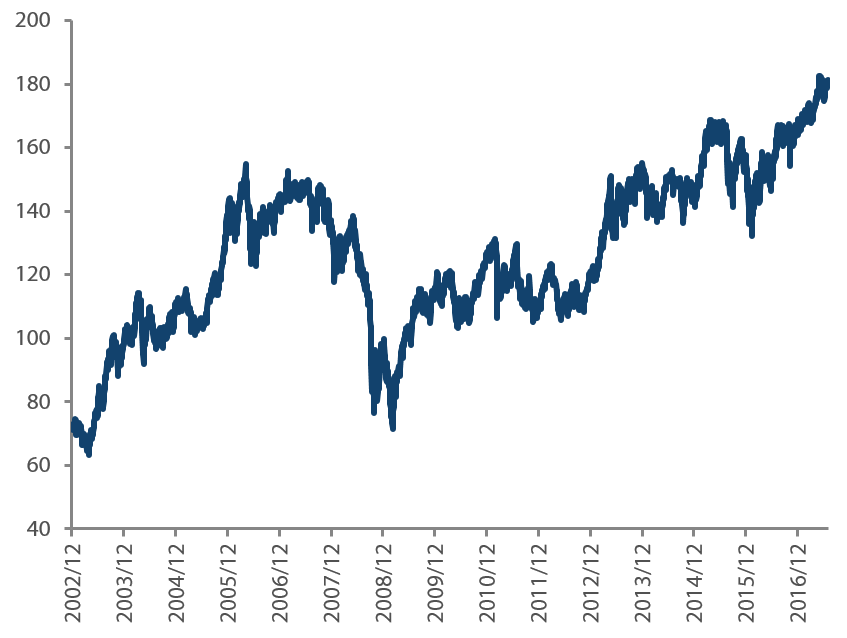 Prior to Nikko AM, he served as Japan Equity Portfolio Manager at Principal Global Investors. He also worked at US hedge fund, Taiyo Pacific Partners in California, and as investment banking analyst at Daiwa Securities SMBC. Junichi earned his BA in Economics from the University of Michigan, Ann Arbor and MBA with Honors from the University of Chicago Booth School of Business. He is a CFA® charterholder.